Privacy settings
We use cookies and similar technologies that are necessary to run the website. Additional cookies are only used with your consent. You can consent to our use of cookies by clicking on Agree. For more information on which data is collected and how it is shared with our partners please read our privacy and cookie policy: Cookie policy, Privacy policy
We use cookies to access, analyse and store information such as the characteristics of your device as well as certain personal data (IP addresses, navigation usage, geolocation data or unique identifiers). The processing of your data serves various purposes: Analytics cookies allow us to analyse our performance to offer you a better online experience and evaluate the efficiency of our campaigns. Personalisation cookies give you access to a customised experience of our website with usage-based offers and support. Finally, Advertising cookies are placed by third-party companies processing your data to create audiences lists to deliver targeted ads on social media and the internet. You may freely give, refuse or withdraw your consent at any time using the link provided at the bottom of each page.
Thank you! Your submission has been received!
Oops! Something went wrong while submitting the form.
Reject All
Cookie SettingsCookie Settings
Accept AllSave Selection
Wallarm
>
Wallarm Learning Center
>
What is a Zip bomb? What is used for?
Attacks, Vulnerabilities

What is a Zip bomb? What is used for? 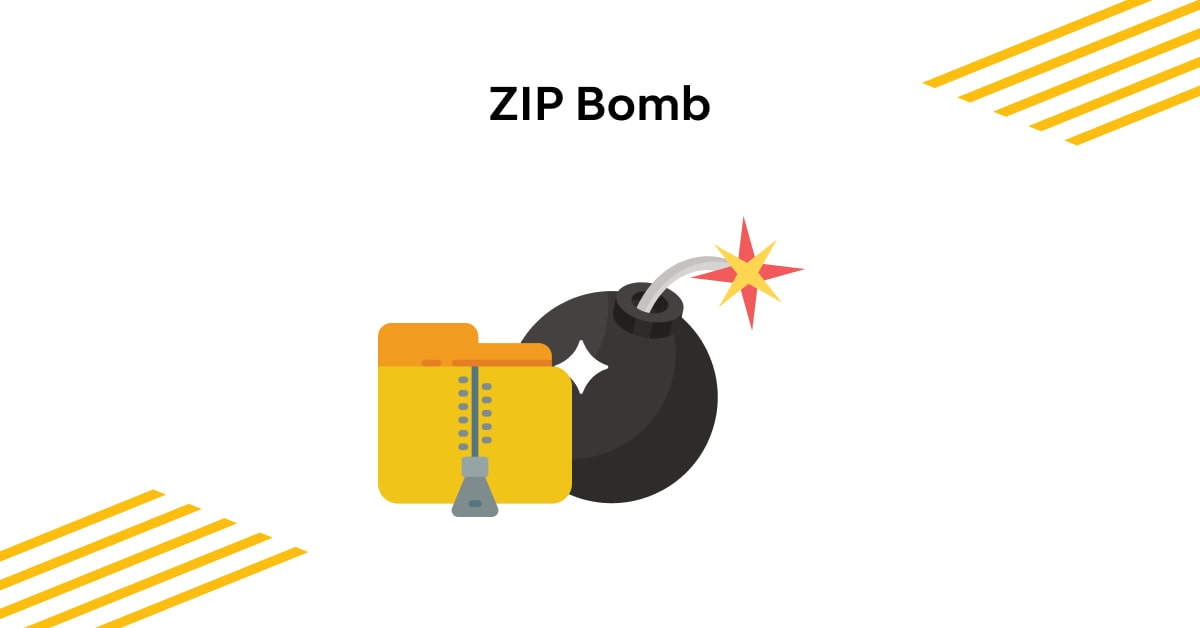 A decompression bomb doesn't hurt a framework similarly that a customary PC infection does. Opening a record marked as a decompression bomb, then again, will make the framework quickly hang, in the long run crash, and you will lose your information. Let’s go on to see a zip bomb definition and what it entails.

What is a Zip bomb (decompression bomb)?

A decompression bomb is a malicious account record that contains a ton of compacted data, generally called a pack bomb or pack of death attack. Whenever the record is opened, it might potentially crash both the program that is getting it and the rest of the system. A decompression bomb is frequently used to cripple an antivirus program.

A pack archive, a compacted foundation record, or an executable program could be inside and out used as a decompression bomb. One of the most eminent pack bombs is an archive called "42.zip." The record is several kilobytes in size, but when de-pressurizeed, it takes up to 4.5 petabytes of plate space.

How do ZIP bombs work and what are their consequences?

A little pack archive record - by far most of which are assessed in kilobytes - is the excellent decompression bomb. Exactly when the report is loosened, in any case, the things are a ton for the system to manage. Dumping a normal pack bomb record can achieve numerous gigabytes of inconsequential data.

Bomb records with additional created decompression can be millions or even billions of gigabytes in size, generally called petabytes and exabytes. As opposed to hindering a program's standard action, a decompression bomb licenses it to fill in true to form. In any case, the narrative record is arranged so that dumping it requires a long speculation, a huge load of circle space, and a lot of memory.

What are ZIP bombs used for?

Commonly, decompression bombs are utilized for odious purposes. To incapacitate a framework's antivirus programming, danger entertainers use zip bombs. Programmers can then get sufficiently close to the framework and taint it with other malware, for example, infections, spyware, and ransomware, after it has been debilitated.

Other malignant programming can sneak in and taint the framework while the infection scanner is managing the decompression bomb.

A zip file is supposed to hold the actual file/folder content in a compressed form, and upon decompression, it ideally returns the same data in a lossless manner. For this, it relies upon one of the various existing compression algorithms. LZ, or the Lampel-Ziv method, is the most commonly used by software creators today.

This algorithm utilizes the sliding-window process and uses a dictionary that is created by using this process repeatedly. Looking for the iterating sequences in the dictionary, it performs compression throughout the window. The dictionary file is also subjected to updating while the procedure works in a repeated manner.

In the LZ process, the algorithm uses 2 digits/parameters. One is the offset where the repeated sequence got its first occurrence in the dictionary, while the second is the length of the matching sequence.

Let us explain the functioning of the algorithm through a pseudo-code:

From the above pseudo-code, you can figure out that it will work nicely when there are more repeated characters/digits in the content. So, the data with lower entropy will create a smaller-size compressed file with it.

There exist other algorithms like LZ77 (an improved variant of LZ) and Deflate. These are more useful when you need to achieve lower entropy for larger files while targeting to do lossless compression. One can opt for your compression tool/algorithm, depending upon the decompression needs and compression size/ratio.

How does a Zip Bomb Take Advantage of Compression Methods?

It tries to understand the compression algorithm/pattern of a zip file and works on how to make this pattern repeat itself several times. Exploiting the compressor, a zip bomb – upon success – will consume multiple times the resources that this program also utilizes.

For example, if the process is creating 10 unzipped files, it will need 10 times processing resources, 10 times memory, 10 times disk space, and 10x times. So, zip bombing a big file will surely make the host system crash.

Though it acts and appears like one, it is not essential that the Zib Bomb in your system is a virus. Let’s think about it rationally.

Like conventional viruses, a decompression/zip bomb acts rashly in your system. It copies the archive file to your/host system to crash it or create troubles. But does it harm the host on its own? No - Mostly, it does not.

Instead of interrupting or hijacking the operations/processes at the host, it lets the computer act in the usual manner. However, because it may contain a huge amount of compressed data, it may end up eating a lot of your disk space, processor capacity, and memory. Due to the same, it will consume more system resources and may degrade its performance.

It is possible that you open a zip bomb, and it takes several hours to get decompressed. So, whether a virus or not, it is not a very good thing for a host system. It will reserve your resources for an unnecessary task, making the computing environment less productive and less useful (memory-wise).

Though it may be a virus or not, today’s antivirus programs are capable of detecting zip bombs. So, it is suggested that you use a reliable antivirus program to detect the trouble-causing zip files before opening them.

Also, it is a good practice to avoid opening the zip folder, you remember not creating or downloading. If a zipped folder looks suspicious, try viewing its content before decompressing or double-clicking it. If even the content of the zip doesn’t seem trustworthy, you must skip opening the file. Delete it right away.

How to find ZIP bomb?

Antivirus programming habitually marks a document as a decompression bomb when it isn't. Clients can Google the document name to check whether others definitely dislike a similar record to decide whether it is a zip bomb.

Clients can play it safe to safeguard their frameworks from speed of death assaults, like the accompanying:

How do I delete a ZIP bomb?

Clients can utilize the Reimage PC fix device or comparative programming to eliminate zip bombs from their PCs. Reimage filters a PC for vindictive documents and things. The decompression bomb document will be taken out once the maintenance cycle is finished. Clients ought to then restart their PCs to finish the interaction, ensuring the decompression bomb is as of now not present.