Privacy settings
We use cookies and similar technologies that are necessary to run the website. Additional cookies are only used with your consent. You can consent to our use of cookies by clicking on Agree. For more information on which data is collected and how it is shared with our partners please read our privacy and cookie policy: Cookie policy, Privacy policy
We use cookies to access, analyse and store information such as the characteristics of your device as well as certain personal data (IP addresses, navigation usage, geolocation data or unique identifiers). The processing of your data serves various purposes: Analytics cookies allow us to analyse our performance to offer you a better online experience and evaluate the efficiency of our campaigns. Personalisation cookies give you access to a customised experience of our website with usage-based offers and support. Finally, Advertising cookies are placed by third-party companies processing your data to create audiences lists to deliver targeted ads on social media and the internet. You may freely give, refuse or withdraw your consent at any time using the link provided at the bottom of each page.
Thank you! Your submission has been received!
Oops! Something went wrong while submitting the form.
Reject All
Cookie SettingsCookie Settings
Accept AllSave Selection
Wallarm
>
Wallarm Learning Center
>
What is YAML? Definition for Beginners
DevSecOps

What is YAML? Definition for Beginners 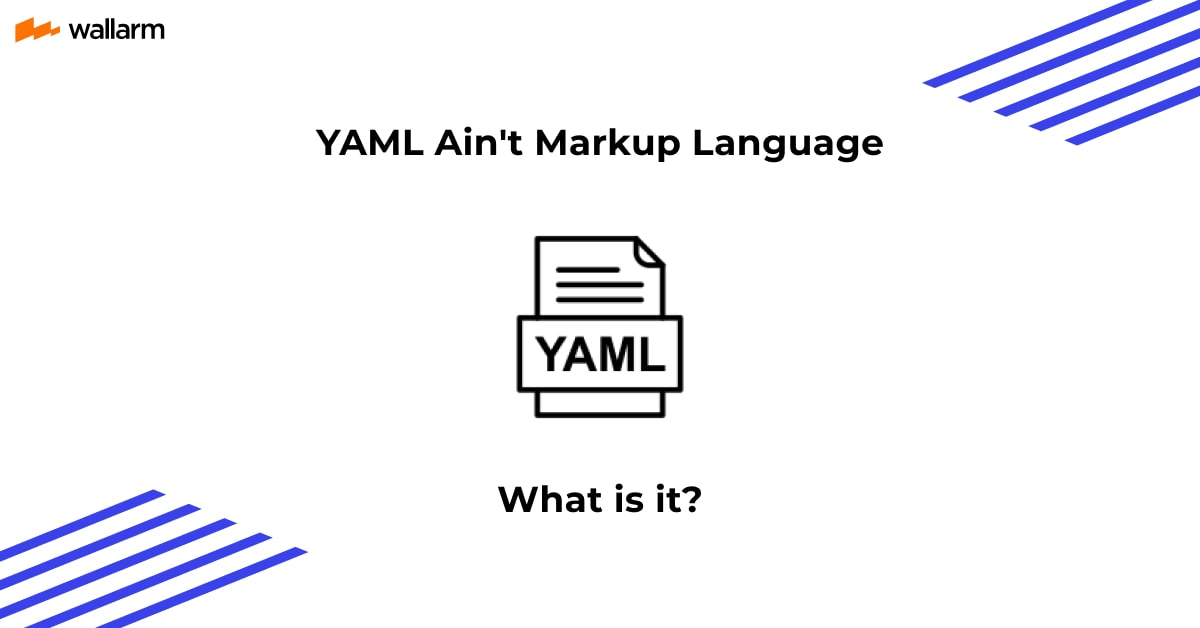 As to why, the data presented is not in a human-friendly format. When YAML came into being, the developer community sighed in relief as this serialization language converts configuration files into an understandable format.

If YAML syntax is new to you and you want to know more about this amazing resource, this YAML guide is just the right thing to refer to.

It stands for ‘Yet Another Markup Language’ in the beginning. Later, it became ‘YAML Ain’t Markup language’ to make one thing clear: the language is only used for data.

The worth-knowing information to know about YAML is mentioned next.

Those were a few of the key characteristics of YAML that set it apart from the rest.

YAML will help you use and process various documents simultaneously. Just use three dashes (---) to separate all the documents. Suppose you have two documents; one explaining the sales generated and the second displaying the expenses of a restaurant on a given day. Now, this is how you can work with these documents in YAML.

Code commenting in YAML is one of the most-loved features. Developers can add specific comments on a code at the time of construction. Developers often forget the purpose of a code and end up using it at the wrong time & the wrong place.

With code commenting, it’s easy to remember a specific detail about a code. To add comments, developers must use the # symbol before the comment.

As compared to traditional syntax, the YAML syntax is highly clear and is free from format symbols like square braces, quotation marks, square brackets, and so on. Because of this clean nature, YAML syntax is easy to scan.

With YAML, you’re allowed to give precise feedback. A YAML feedback will indicate a specific line eliminating the hard work that one has to make to find out the exact problematic line.

In YAML, hollow spaces are denoted by spaces. Tabs are not used and are allowed here. This is a good practice as it avoids intentional tabs use that can cause huge trouble in the future.

Getting started or using YAML isn’t very tough. It’s very user-friendly as it’s based on Unicode characters. Those who’re dealing with codes must be aware of the fact that Unicode ensures that few codes are featuring structure information while few are consisting of data details. By all means possible, it ensures that data is presented in a very natural manner.

YAML is gaining popularity because of many reasons and its various data type support is one of them. Next, we’re going to explain the commonly-supported data types.

This is the foundation of YAML. You must understand that every item, used in the YAML document, should be a part of a minimum of one dictionary. In the key-value pair, the key must be a string while the value is a scalar. Value could be any data type while string could be a dictionary and number.

YAML lets you enter the null data types with the help of an unquoted null string or tilde.

The string data types of YAML are presented in a Unicode format and don’t require specific definition. In the case of escape sequence handling, one must use double quotes to define the string state.

YAML lets you explain the arrays in single or multiple lines. The multiple-line format is preferred in case of lists featuring complex objects. Scalars are avoided in general in the case of lists.

Here, an array can feature a verified YAML value that has no same data type in the concerning list.

For better understanding, here is an easy YAML syntax example for you.

What is YAML used for?

YAML has wide use cases. However, it is most-used in configuration file creation. Because of its impressive code readability, it’s now used everywhere in the place of JSON. So, anyone willing to prepare configuration files are now preferring YAML.

If you use Ansible, you can use YAML for creating Ansible playbooks.

As mentioned above, YAML can be easily used for Kubernetes services. Now, let’s try to understand how.

As we all know, Kubernetes require defined and actual states. k8s objects are used to define the cluster state. In Kubernetes, YAML is widely used for creating k8s resources like objects and pods.

Also, it plays a key role in Kubernetes deployment. When you’re using Kubernetes API, the crucial kubectl information is declared in a YAML file. Kubectl, on its own, converts the concerning file into a YAML file as an API request is raised.

As YAML is an ideal alternative to JSON, there will always be a close comparison between these two. Hence, we’re going to cover YAML vs JSON next.

YAML formatting and syntax are very useful for the DevOps team as it is used extensively by the team to define the development pipelines. The language permits developers to state the pipeline features such as source and mark-up files.

As pipelines are code versioned, it’s easy for DevOps teams to spot the errors and coding issues at an early stage which further leads to the quick fixture.

Advantages and Disadvantages  of YAML

Finally, let’s weigh down the advantages and disadvantages of using this language, and knowing them will help you use it accurately.

That was all about YAML's advantages. Even though they are impressive, they are not enough to ignore the disadvantages that come with YAML. Let’s talk about the demerits of this language.

YAML is going to rule over the world in the future as the current trends are indicating this. It’s observed as one of the most viable JSON alternatives and if you haven’t used it until now, we’re sure that you’re going to use it in the future.

When you do so, refer to this guide from Wallarm to gain deeper insights into YAML. It explains its key meaning, its key features, and other related concepts that every new learner must be aware of.