Privacy settings
We use cookies and similar technologies that are necessary to run the website. Additional cookies are only used with your consent. You can consent to our use of cookies by clicking on Agree. For more information on which data is collected and how it is shared with our partners please read our privacy and cookie policy: Cookie policy, Privacy policy
We use cookies to access, analyse and store information such as the characteristics of your device as well as certain personal data (IP addresses, navigation usage, geolocation data or unique identifiers). The processing of your data serves various purposes: Analytics cookies allow us to analyse our performance to offer you a better online experience and evaluate the efficiency of our campaigns. Personalisation cookies give you access to a customised experience of our website with usage-based offers and support. Finally, Advertising cookies are placed by third-party companies processing your data to create audiences lists to deliver targeted ads on social media and the internet. You may freely give, refuse or withdraw your consent at any time using the link provided at the bottom of each page.
Thank you! Your submission has been received!
Oops! Something went wrong while submitting the form.
Reject All
Cookie SettingsCookie Settings
Accept AllSave Selection
Wallarm
>
Wallarm Learning Center
>
What is the difference between CSRF and XSS?
Attacks

What is the difference between CSRF and XSS? 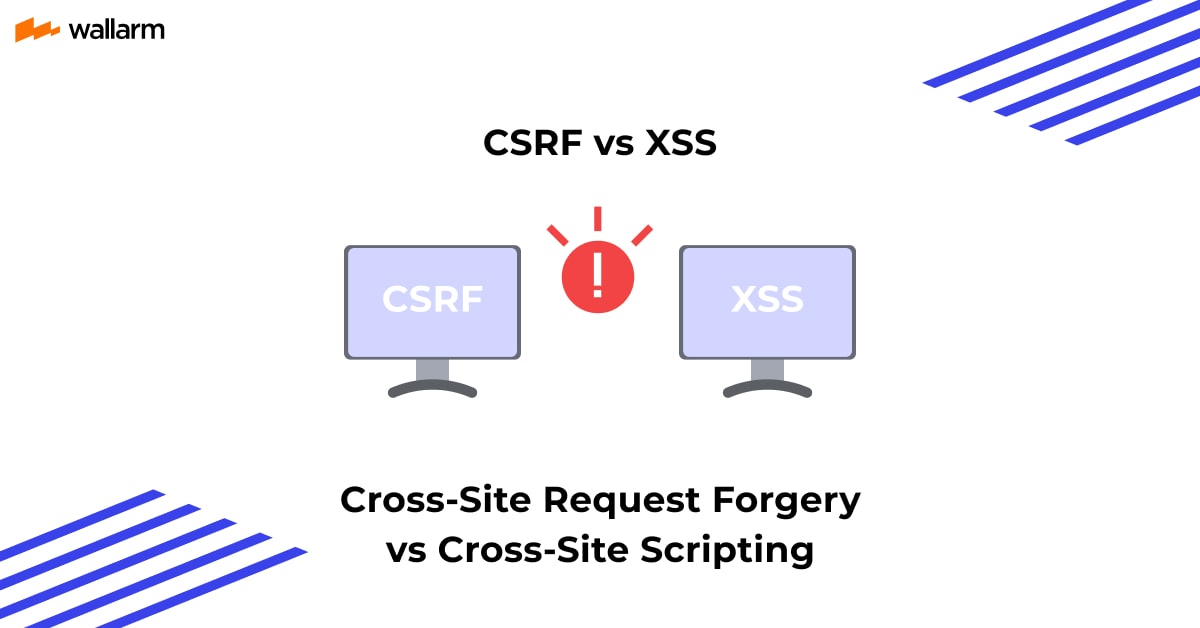 The most viable way to deal with cyber threats is to remain aware of their occurrence scenarios and take early preventive measures. For security experts, client-side attack prevention is tedious and daunting as it directly puts critical data at risk.

CSRF and XSS are two such client-side attacks. They both are nefarious and have serious outcomes.

Both involve injecting ill-intent contents into the end-user's devices and are based on identical origin policies. But are they both the same? Where do they stand poles apart from each other? Let’s unearth the truth behind the CSRF v/s XSS attack.

Call it XSS or Cross Site Scripting, XSS refers to a very common cybersecurity threat. Its successful implementation permits threat actors to introduce corrupted client-side scripts in user-accessible web pages. The scripts are mostly JavaScript-based and are injected into the website/web pages that a user browser mostly finds dependable.

It’s not necessary that a validated session is established between the website and end-users. Based on the process and modus-operandi of the attack, three varieties of XSS exist.

The first type of DOM XSS takes place when the user-provided input is modified via JavaScript in a highly unprotected ecosystem. Consider a scenario where an end-user captures a form value and takes the help of JavaScript to provide it in the DOM of the system. If, by any means, the attacker manages to have hold of this input, it’s possible to control the executable script.

Up next, we’ve reflected XSS, which means receiving an HTTP request by the web server and providing the same information in the output without any data protection. The entire requested information reflects in the outcome. Thus, it’s named as reflected XSS.

The last type is stored XSS, which takes place when a piece of user-generated data is first stored in any commonly used storage and is later uploaded on the webpage.

All these XSS attack varieties are capable of causing potential harm to the concerned application.

The XSS occurrence possibility for an XSS attack is based on two situations. It can take place when:

Either way, corrupted content reaches the intended browser and becomes a JavaScript component. It’s not necessary that only JavaScript code is a part of the code. It might feature Flash, HTML, or other code varieties as per the type of code the browser is executing at the time of an attack.

When the malicious code is processed, it can fetch any data. It’s hard to comprehend the reach of the XSS attack as cookies, users’ login data, session data, transaction data, and everything else can be obtained.

For better clarity on XSS processing, have a look at the real-time XSS example. Have you seen a 404 error page? It’s a very common issue, and hackers take advantage of this error to launch an XSS attack. Let’s assume that the user tries to access an unavailable page of the Unsafe.com website.

A skilled attack planning to conduct an XSS attack will introduce corrupted code in the error page code.

When the victim sees the non-existent page of Unsafe.com, the outcome will feature an ill-intended JavaScript-based code, and when the code is processed, the hacker will be successful to obtain entire session details.

Responsible to cause troubles like alerting the client information and tons of other dangers, CSRF or Cross-Site Request Forgery occurs commonly on websites and webpages. Here, hackers don’t carry out an attack. Instead, it uses a verified user to attack a website. For instance, if a hacker wants to hack Google’s server, it won’t directly try taking over the server. Instead, it will take the help of someone verified or authenticated to access that server, deliver malicious content via the help of that user, and then take control of the aimed server.

To make it happen, it takes advantage of a pre-existing flaw in the targeted app/website and uses it against it. It uses social engineering techniques to fool authenticated users. The mandatory conditions to be fulfilled for a CSRF attack are:

The process of a CSRF attack is simple. The threat actor forwards the damaging HTTP request to the aimed website. As the authenticated user accesses this site, the maliciously-designed request is automatically processed, and the hacker can view/use the user details.

Consider a bank’s website that accepts fund transfers using a GET request. The code will look like this:

Now, assume that a threat actor is trying to lure a user, Josh, to transfer an amount of $5,000, to an account named Mike. Threat actors can easily modify the beneficiary details and transferred amount.

XSS vs CSRF - What Is The Difference?

Now that the basic understanding of these two vulnerabilities is clear, let’s talk about the differences that these two shares:

When one studies the XSS prevention technique, it’s observed that CSRF tokens are often used as a means. CSRR tokens are the auto-generated, distinct, and arbitrary values that a server-side application creates as a CSRF preventive measure. They link with the concerned HTTP requests and help in figuring out the possibility of a CSRF attack.

Along with CSRF attacks, CSRF tokens are useful to prevent some sort of XSS attacks as well.

Reflected XSS is the most common example of this. Have a look at customary reflected XSS attacks.

This is a reflected XSS vulnerable function. Now, let’s introduce a CSRF token in this function.

Introducing this CIwPZNlR4XbisJF39I8yWX9n4WNoWwXZ CSRF token will reduce the XSS attack possibility as the server will accept only those requests that are featuring CSRF tokens. This way, the CSRF token will prevent a hacker from falsifying or manipulating the cross-site request that prevents an XSS attack.

But, it’s not always a viable solution to prevent an XSS attack. For instance:

Too much text seems confusing?! Well, it is. So, have a look at this crisp comparison of XSS attack vs CSRF in a table format.