Privacy settings
We use cookies and similar technologies that are necessary to run the website. Additional cookies are only used with your consent. You can consent to our use of cookies by clicking on Agree. For more information on which data is collected and how it is shared with our partners please read our privacy and cookie policy: Cookie policy, Privacy policy
We use cookies to access, analyse and store information such as the characteristics of your device as well as certain personal data (IP addresses, navigation usage, geolocation data or unique identifiers). The processing of your data serves various purposes: Analytics cookies allow us to analyse our performance to offer you a better online experience and evaluate the efficiency of our campaigns. Personalisation cookies give you access to a customised experience of our website with usage-based offers and support. Finally, Advertising cookies are placed by third-party companies processing your data to create audiences lists to deliver targeted ads on social media and the internet. You may freely give, refuse or withdraw your consent at any time using the link provided at the bottom of each page.
Thank you! Your submission has been received!
Oops! Something went wrong while submitting the form.
Reject All
Cookie SettingsCookie Settings
Accept AllSave Selection
Wallarm
>
Wallarm Learning Center
>
What Is System Hardening? 💪 Types and Benefits
DevSecOps

What Is System Hardening? 💪 Types and Benefits 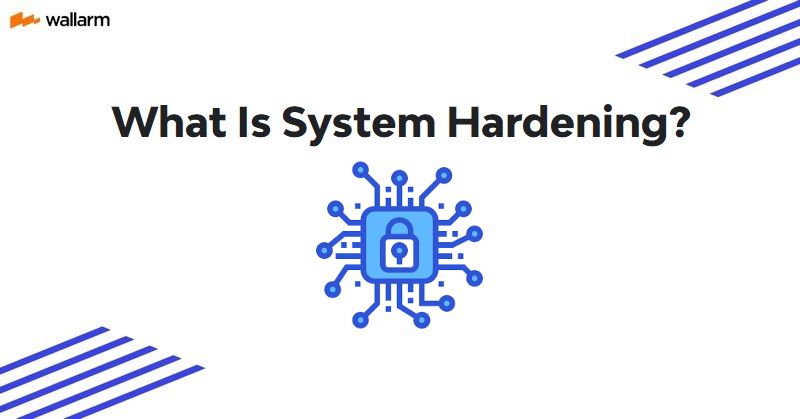 Cybercrimes are growing like mushrooms and happening very often. Mostly, the attacks are intended to harm the server and the data-driven devices of an individual or an organization as this is where most of the digital assets and data are saved.

So, if one talks about keeping cyber crimes under control, it’s all about making servers and computer systems so strong that a threat actor can’t ever gain unprotected or unauthorized access to them. This is where system hardening comes to the rescue. What is it? How does it work? Why does application hardening in computer security holds so much importance? Let’s explore this together.

What Is System Hardening? - Understanding The Basics

Also called application hardening, it is a long-established technique that AppSec and security experts advocate using when individuals, enterprises, and start-ups seek enough protection from cyber dangers. Applicable on servers and computers, the procedure entails:

What Makes it Important?

Cybersecurity is a huge concern that organizations are trying hard to deal with. By limiting access points to servers and data-driven devices, system hardening reduces the cybersecurity possibilities.

Adoption of this security practice is important for both organizations and individuals as it allows them to secure all digital asset entry or access points. System hardening provides organizations an opportunity to keep an eye on activities happening on servers and computer devices without missing a single detail.

This continual monitoring leads to early threat detection that plays a crucial role in limiting the impact of a cyber-attack. It’s a way to keep data protected and under the surveillance of updated systems.

With role-based access, hardening ensures that only the right people are accessing data at the right time. All these things make an organization strong enough to withstand an attack and experience minimum impact if an attack takes place at all.

Why must be bothered to invest hard work and resources that system hardening demands? Well, because it brings a lot to the table and improves the security stature of the organization. Here are some of the key benefits that any system-hardening user is bound to experience.

App/system hardening involves using tools like firewalls, anti-virus software, IDS & IPS, password managers, encryption, and so on. All these tools are designed to improve the security profile of an organization and make it strong enough to withstand multiple kinds of attacks and dangers.

OS updates & security-specific patches are integral parts of the process. These two methods improve the server and system performance and make them more productive and available around the clock.

When hardening is used, cyber dangers are avoided. The cost of a cyberattack can be some billion dollars. You might end up in bankruptcy if an attack is too bad. So, investing in system/app hardening saves you unseen but certain future expenses, incurred after an attack.

If you have digital assets and resources, audits are mandatory. But, when you’re auditing a huge amount of data or resources, things become tedious and complex. Application/System hardening breaks auditing requirements into less complex components and makes them easy to handle.

There can’t be a single approach to protect servers and devices from all kinds of cyber dangers. The one-size-fits-all approach doesn’t work in the application security domain. This is why its multiple kinds target different aspects.

With an intent to protect servers from unwanted access or a notorious attack, the server-hardening system hardening approach entails adopting security measures that can safeguard ports, components, data, permissions, functions, and everything else for servers. The approach covers the software, hardware, and firmware layer of a server.

As it’s clear from the name, software application or application hardening is a system hardening approach used to protect software/applications in use. It covers all the in-house, standard, and 3rd party software that your server and computer devices are using.

The core focus of this security approach remains on key server applications that entail spreadsheet applications, custom software, database software, web browser, and user login devices. However, it’s not limited till here. It extends to server monitoring and maintenance software. Basically, while all software/applications are there on a server/device, this hardening approach aims to protect it.

The approach uses practices like constantly updating the application code, and OS version, and implementing stringent security measures for safeguarding purposes. Some of the key examples of software application hardening approaches are:

Its aim is to safeguard the communication network that all the data-driven devices and servers follow while connected to the same network. Mainly, it’s done via two methods. The first method involves using the IPS. This software helps network engineers stop any unwanted intrusion into the network.

The second method that this approach uses is the IDS. While IPS ensures no intruder is reaching the network, IDS helps in early and real-time intrusion detection. Both are software-based methods and are used to keep a watch over the network behavior, activities happening, and performance.

Common actions could be:

Whichever databases and database management tools are used in an organization, this approach takes care of its security. It’s a strategic system-hardening approach that spun around three processes.

The first process involves controlling user access and privilege. The second process entails getting rid of database services that are no longer needed. Last process aims at using the best encryption and security measures for protecting databases.

While these processes are at work, here are some of the most commonly used database hardening techniques.

It revolves around updating the system regularly, finding a patch for a flaw early, and having automatic updates for service packs.

Here, only the fundamental software or apps/solutions that are essentially responsible for server operations are covered. As almost all the software receives frequent updates, this approach is implemented automatically.

However, at a complex level, it’s more than just simply updating the OS version. It also means:

Like any other process, app/system hardening can only bring consider-worthy results only when it’s strategically applied.

There are certain rules and standards that define and govern the process. Even though certain variations of these standards exist, what NIST recommends is adopted at a large scale. Have a look at NIST's recommended hardening norms:

We are done talking about NIST rules/suggestions here.

Success of the procure is the outcome of a thought-out strategy that involves:

Every organization has different needs. Before you start, take some time to figure out what exactly your organization demands, what your priorities are, and which server or system component needs to be protected.

Carry out an extensive audit on in-use servers and all the computing servers and use it to figure out what all vulnerabilities are worth the effort. Take the help of resources like penetration tests, configuration management tools, vulnerability scanners, and so on for the audit.

As mentioned above, there are multiple hardening standards and you need to pick one. This is important to bring uniformity in the process. Make sure whatever standards you pick are followed all through the process without a fail.

Implement your plan. It’s always suggested to start with to reduce the vulnerability opportunities within the organization. At every stage, the plan execution should be monitored thoroughly to avoid any major loopholes.

Don’t want to make a wrong move with security hardening standard implementation? Try moving ahead while having unwearied attention to these strategies:

Having a strong and established security mechanism isn’t built overnight. It takes time to figure out what you need, how many resources you already have, and which technique works the best for you.

Remember, Rome wasn’t built in a day. It takes time to come up with a viable solution. So, it’s wise to go slow and take one step at a time. Decisions made in haste might end up causing damage beyond your expectation.

System hardening is a long process and can often take months to be completed. Hence, experts recommend using automation as much as possible. Allow automatic OS updates for devices, servers, and other resources. Automate network and server monitoring, deploy automation at security patches, and use automation in data encryption.

Only automation saves human efforts and makes things fast, it also leads to accuracy. Manual handling of all these aspects can be erroneous at times. But, this isn’t going to happen when automation is at work. Everything will be accomplished with full conviction.

There is no point in having system-hardening approaches if they aren’t time-relevant or updated. As threats and dangers evolve with time, you must update and evolve your system hardening techniques at regular intervals. Audit the present techniques and make changes as per the current cybersecurity industry.

Adoption of these practices will help you have a flawless system-hardening approach in place that will never disappoint you.