Privacy settings
We use cookies and similar technologies that are necessary to run the website. Additional cookies are only used with your consent. You can consent to our use of cookies by clicking on Agree. For more information on which data is collected and how it is shared with our partners please read our privacy and cookie policy: Cookie policy, Privacy policy
We use cookies to access, analyse and store information such as the characteristics of your device as well as certain personal data (IP addresses, navigation usage, geolocation data or unique identifiers). The processing of your data serves various purposes: Analytics cookies allow us to analyse our performance to offer you a better online experience and evaluate the efficiency of our campaigns. Personalisation cookies give you access to a customised experience of our website with usage-based offers and support. Finally, Advertising cookies are placed by third-party companies processing your data to create audiences lists to deliver targeted ads on social media and the internet. You may freely give, refuse or withdraw your consent at any time using the link provided at the bottom of each page.
Thank you! Your submission has been received!
Oops! Something went wrong while submitting the form.
Reject All
Cookie SettingsCookie Settings
Accept AllSave Selection
Wallarm
>
Wallarm Learning Center
>
What is Scareware Malware? Removal and Protection
Attacks

What is Scareware Malware? Removal and Protection 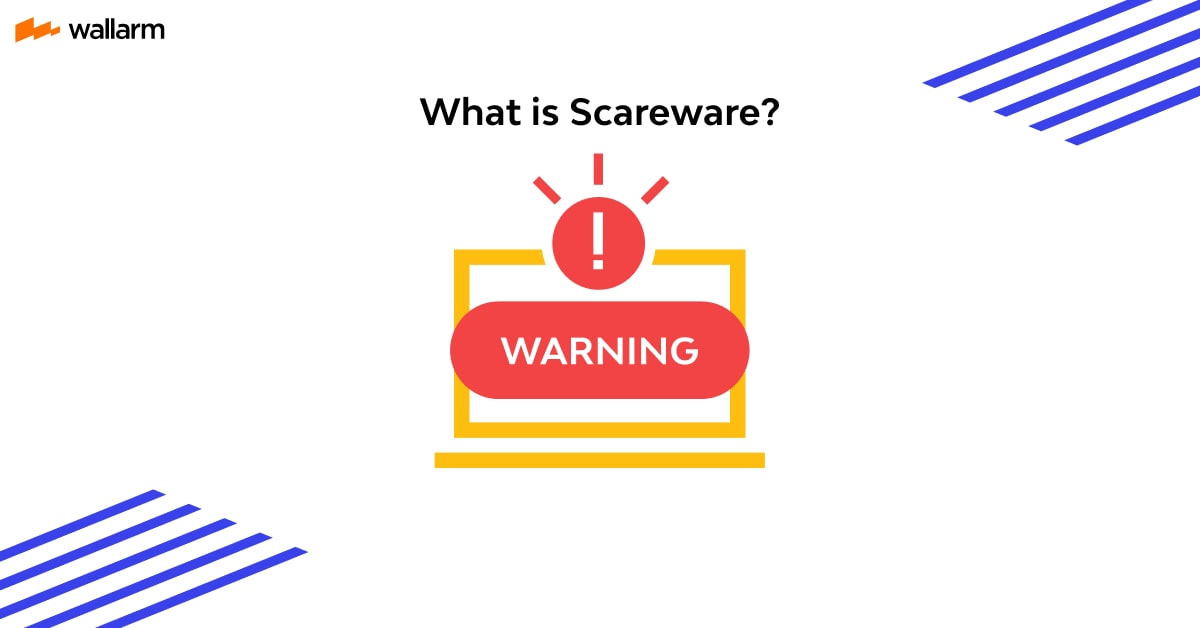 The job of an AppSec security expert is tough because of various seen and unseen threats. Your AppSec approach isn’t complete if you’re not knowing about scareware attacks and their prevention. Persons responsible for cybersecurity and API security have to remain diligent about this attack as it is a potential threat if not handled carefully. The blog is all about it.

The simplest Scareware definition explains this as a harm-causing cyber threat that involves fear-mongering into the target so that they are bound to download corrupted malware. For instance, a cyber-attacker will tell you that your system is at high risk as you’re not using anti-virus software. Fears are losing crucial data, corrupting systems, and even leaking critical data will be infested within the target.

As fear and fooling around tactics are used to carry out a Scareware attack, it’s placed under the social engineering attacks. Paying attention to such attacks is compulsory because their consequence is huge. It could provoke issues like data theft, spying on targets, financial fraud, and so on.

When the modus operandi of Scareware is concerned, the Scareware popup has the highest significance as it’s what makes malware installation possible. It all starts with a display of random pop-ups. These pop-ups could be ads, notifications, warning messages, gift coupons, and a message.

These pop-ups imitate the logo and text of already-established software/tools to win the confidence of the target. Once that is done and the target clicks on the pop-up. A bogus or virus-infected malware will be presented to the victim. Usually, it displays as a pop-up on the victim’s screen.

Hackers will present this malware as a potential solution to fix the existing issues, which are not even real. When the target downloads or installed the malware, hackers are successful.

Depending upon the mechanism of the malware, one can experience data theft, keyboard cloning, screen mirroring, software corruption, and many more hassles.

The customary example of this attack is the constant and nosy pop-up about a software/tool you’re receiving constantly. The Scareware popup is designed to scare the target and tempt him/her to install the malware.

Let’s tell you of 2 more examples:

To minimize the impact of a Scareware attack, which could be very devastating, early detection plays a crucial role. Hence, one must be aware of some viable tactics that are useful for spotting such attacks in action. Here are what works mostly:

Your system is under the threat of a Scareware when you’re seeing too many pop-up messages/content on the screen. Any safe and authorized software. Installed on the system, will not send such frequent pop-ups. Also, a pop-up message, delivered via malware, is certainly a bit different. For instance, it will keep floating, again and again, the text won’t be very clear, and the colors will be a bit faded. From its looks itself, the pop-up message doesn’t seem genuine. One can easily make out that it’s fake.

If you get constant fear-infesting notifications or messages like your system is under attack, download the anti-virus now to protect your device, your data is leaked, and so on, understand that a hacker is planning a Scareware attack on you. The scarier would be the notification, higher are the possibilities of succeeding in the attack. Legitimate software doesn’t advertise like that.

When you’re facing trouble accessing your previously saved system files to the browser then it’s mostly because of malware that is blocking the pathway.

Stay after constant update requests from software as its traps to lure you into a Scareware attack. If you want to check available software update details, go to Setting > App > Updates.

If you’re experiencing certain altered settings like brightness change, change in desktop layout, shuffling of files and folders, and many more then it’s an evident sign of a Scareware attack. Certain malware is designed to change default settings so that the hacker has easy access to the targeted system.

Once you’re sure that your device is infected with Scareware, your first step should be to maintain your calm and act sensibly. Scareware removal comes the next. Here are a few actions to take once the presence of a scary pop-up has been confirmed on your device:

Prevention is better than cure. This is why one must be aware of very basic Scareware prevention techniques that any novice can use.

No matter how skilled a hacker seems, it can’t win against aware and informed internet users. So, use the above tips and tricks that are useful to mitigate Scareware malware attacks. These simple tips pay off well in the long run.