Privacy settings
We use cookies and similar technologies that are necessary to run the website. Additional cookies are only used with your consent. You can consent to our use of cookies by clicking on Agree. For more information on which data is collected and how it is shared with our partners please read our privacy and cookie policy: Cookie policy, Privacy policy
We use cookies to access, analyse and store information such as the characteristics of your device as well as certain personal data (IP addresses, navigation usage, geolocation data or unique identifiers). The processing of your data serves various purposes: Analytics cookies allow us to analyse our performance to offer you a better online experience and evaluate the efficiency of our campaigns. Personalisation cookies give you access to a customised experience of our website with usage-based offers and support. Finally, Advertising cookies are placed by third-party companies processing your data to create audiences lists to deliver targeted ads on social media and the internet. You may freely give, refuse or withdraw your consent at any time using the link provided at the bottom of each page.
Thank you! Your submission has been received!
Oops! Something went wrong while submitting the form.
Reject All
Cookie SettingsCookie Settings
Accept AllSave Selection
Wallarm
>
Wallarm Learning Center
>
What is Magecart Attack? ⚔️ How to prevent it?
Attacks, Vulnerabilities

What is Magecart Attack? ⚔️ How to prevent it? 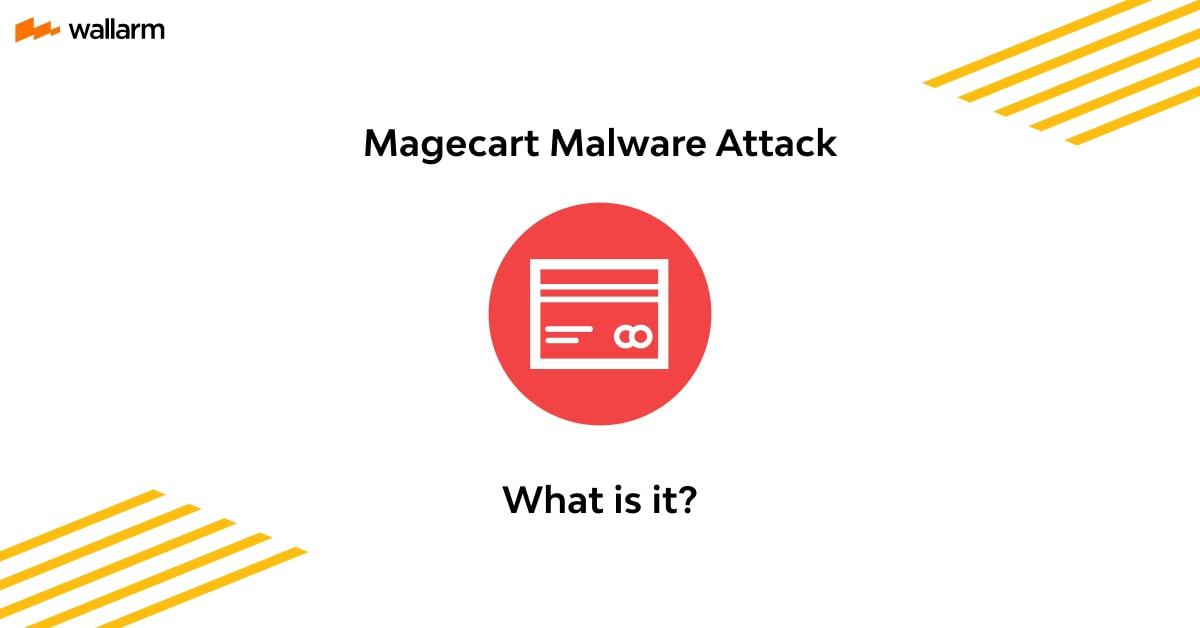 Hackers are getting more and more creative, they tend to always find a way to benefit and usually it is something really unique in the first place. When we are talking about “black-hat” activities, we usually think about ransomware attacks, massive service exploitation or phishing campaigns, this time the attack is something different, it is called skimming.

Skimming is interesting, its idea is to compromise a third party vendor (physical or digital), thus, extracting data about the client's credit or debit cards.

One technique for skimming involves stealing a large card reader from a legal terminal using pincers or a movable wrench. The gadget can also be put nearby on the ground or within a cash machine's mouth. Typically, they are found immediately linked to the ATM faceplate where other devices have previously been attached, but without any visible wire in it (such as glue). Another typical location might be above or below the keypad below, where there is no camera present. In order for a thief to copy the PIN and card being inserted later on with a covert camera or scanner, surveillance cameras can also be used at ATMs to record both of these events.

Magecart malware - What is it and How it Works?

If we were to learn a little bit about the history of hacking, we would quickly discover that hackers prefer to give their organizations creative names. Magecart is an organization of hackers, as you would have imagined. They frequently only focus on online shopping cart systems, one of which is the Magento platform, which offers checkout and shopping cart capabilities for store websites. Magento served as these groups' initial objective, and it serves as the inspiration for the name of the organization.

Due to the fact that online shopping carts save client payment information, they make desirable targets. If a malware can access this data context, you have a ready-made card collection tool. The code utilized with these third-party components isn't properly vetted on almost all e-commerce sites that use shopping carts, which is a formula for a precompiled hack.

Magecart hacker group have reportedly performed malicious activities from 2016. The research team of RiskIQ organization reported finding hourly notifications for websites being infiltrated by its skimmer malware in its research of a Magecart incident in 2018. Magecart was listed as "Most Dangerous Hackers In 2018" by a magazine called Wired.

The idea for the Magecart black-hats is to deliver and obfuscate JS payload. Their method contains modifying the source of the targeted software or inflicting it with malware. Many RCE (Remote Code Execution) exploits were enumerated by the research teams. Uploading their code to an abandoned online Repository (such as GitLab) is one cunning approach for black-hats to deliver their malicious payloads. As a immediate result, various web applications will soon have malicious payload that is actively being used. With the attack on MyPillow webapp, Magecart hacker group demonstrated its willingness to proceed forward. The report from the security research teams claims that although MyPillow swiftly identified and eliminated the initially crafted malware, the hacker group "Magecart" was still able to access the website.

The idea behind Magecart's attacks is known as data skimming, for such an attack to be successful, the following conditions must be met:

Even though the first Magecart activity was officially reported in 2015, they are active since 2012.

Many online retailers are utilizing the targeted framework for online shopping, also known as “Magento”. This causes a huge attack vector. One of the most popular and known attack of the black-hats is in 2015, that’s when their name was shaped. Research organizations enumerated that over 3000 instances of the framework were compromised.

This quantity of hacked stores increased quickly during the ensuing years. By 2022, the same reporting agencies have found over 70,000 compromised establishments that had once housed a digital skimmer. If you count the victims of the supply chain attack, more than 100,000 stores were impacted.

How to prevent magecart attack

Website owners with minimal resources shouldn't give up hope, even if hackers can utilize sophisticated tactics to plant and conceal skimmers. Free website scanners can assist in identifying unusual connections made by programs like Magecart, and browser developer tools can help examine the contents of such connections.

A guide with comprehensive instructions on how to conduct such investigations and a list of helpful tools particularly made for locating and removing Magecart infections was released by Trustwave, a research from SpiderLabs.

Consider initially listing all of your outside e-commerce and internet ad providers. You may mandate that they perform audits or other self-evaluations of their code.

Subresource integrity should be implemented to prevent the loading of updated scripts without your consent. To find these scripts, you'll need to actively train your devops staff and do a comprehensive code review.

Instead of using the servers of any of your suppliers, host as many of your third-party scripts on your own as you can. Given that the typical e-commerce homepage has dozens of third-party sources, that is easier said than done.

Check your endpoint security provider to see if they can thwart attacks like Magecart and others that involve third parties.

Make sure your cyber insurance covers this sort of breach.

What Can Merchants Do to Prevent Magecart Attacks?

Take the following actions to lessen the danger of Magecart as well as other client-targeted attacks:

There are now specific programs that handle client-side defense and aid in avoiding Magecart assaults.

What Can Consumers Do to Protect Themselves?

When purchasing online, customers put their faith in eCommerce sites. While eCommerce businesses are in charge of protecting their websites, each individual customer may also take precautions. Consumers should think about using these security precautions: