Privacy settings
We use cookies and similar technologies that are necessary to run the website. Additional cookies are only used with your consent. You can consent to our use of cookies by clicking on Agree. For more information on which data is collected and how it is shared with our partners please read our privacy and cookie policy: Cookie policy, Privacy policy
We use cookies to access, analyse and store information such as the characteristics of your device as well as certain personal data (IP addresses, navigation usage, geolocation data or unique identifiers). The processing of your data serves various purposes: Analytics cookies allow us to analyse our performance to offer you a better online experience and evaluate the efficiency of our campaigns. Personalisation cookies give you access to a customised experience of our website with usage-based offers and support. Finally, Advertising cookies are placed by third-party companies processing your data to create audiences lists to deliver targeted ads on social media and the internet. You may freely give, refuse or withdraw your consent at any time using the link provided at the bottom of each page.
Thank you! Your submission has been received!
Oops! Something went wrong while submitting the form.
Reject All
Cookie SettingsCookie Settings
Accept AllSave Selection
Wallarm
>
Wallarm Learning Center
>
What is Java API?
API Security

What is Java API? 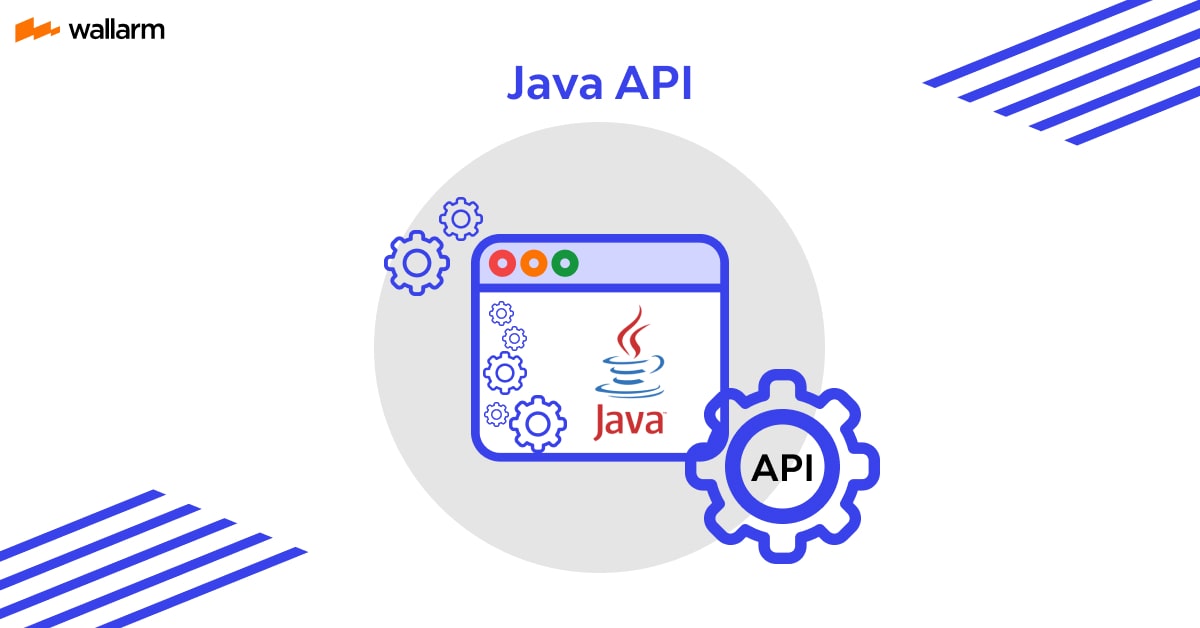 When the two most viable and essential application/software development comes together, programmers are allowed to have unmatched functionality. Java API (Application Programming Interface) is the perfect example of how to attain this. Acknowledged as a crucial entity for internal and open development, it is an expedient way to achieve flawless development.

It is unarguably one of the most globally recognized and widely-used object-oriented (OO) programming languages granting the least possible implementation-related dependencies. It’s famous in the developer’s community due to its WORA concept, meaning Write Once and Run Anywhere model.

With Java, developers need to invest efforts only once and use the existing code infinite times. Its congeniality with all the commonly used e-devices comes from JVMs or Java Virtual Machines.

It stands second to none when adaptability is considered as it automatically adapts as per the nature of hosting OS.

API in Java is delivered via Java Development Kit or JDK. JDK is made up of three entities.

Java brings multiple pre-designed components into action for accomplishing the development process. Its API connects to included components and enable programmers to use their functionality so that they can make most of them.

Why use the Java APIs?

The Java APIs can be a valuable tool for developers. They let you access a wide variety of third-party services with just a few lines of code, which can be helpful in solving problems or building apps that are difficult to do without them.

Even if you have no plans to build your own apps, knowing how these APIs work likely will help make your time as an app developer easier.

The Importance of Using APIs in Java

API is more than any other ordinary entity. It’s a way to make development smooth and enhance the development experience. Here is what significance API holds in Java.

REST API is one of the most widely used API in Java, along with Web API, Java Help, Facebook.4J, and Twitter.4J. It makes code available and usable for every related application/program. While one is using REST API in Java, the basic rules to be followed are:

The five acceptable types of Java API are explained next:

APIs in Java can be custom as well as open-source packages. For the APIs your developer or a service provider has created, you will have to learn relevant functions and get to know how to fetch data or perform functions through it. However, Java’s own API have detailed descriptions and guidance available on Oracle’s official website and throughout the internet.

Let’s take the example of JDBC API. It is the API that lets you access your project’s database and fetch data using various legit queries. It has 2 packages, namely - java.sql and javax.sql.

To use the classes in these packages in your code, you must first import these in the beginning of your file. For this, the code will be:

If you want to use a few specific classes from any of these APIs, you can perform the import using following function:

In above example, imported classes are SQLException and Connection. These both belong to java.sql package of JDBC API.

Advantages of API in Java

The direct impact of using API in Java is expedient the development as it makes pre-defined classes and packages available for intended programs. However, that’s not the only advantage. There are many more, such as:

The Java API Standard Library is an important part of the Java language, and it’s one of the main reasons why Java has become the most popular programming language. This library offers over 100 APIs that are used for everything from building apps to graphics to web services.

These APIs are designed to make your life as a developer easier. They provide access to everything from mathematical functions (the Math class) to X-Ray technology (the X-Ray class). Additionally, they offer ways in which you can integrate your app with other resources on your computer or online, such as Google Maps or Twitter.

If you’re looking for a more advanced way to handle data storage, you can use the ObjectInputStream class—or if you need help making your program work offline, you can use the Service Locator interface. There are many different APIs in the Java API Standard Library that allow developers to accomplish their goals in creative and efficient means.

APIs, lacking security, bear high risks for the developed applications. This is why developers are allowed to adopt key API security practices without any compromise. There are several frameworks for this job. For instance, if REST API is used in Java then Apache Shiro is a great choice to make.
Using this framework, one can easily execute API token security of your choice. Java EE and Spring offer a robust security framework for Java API. However, one has to make tedious efforts to bring these frameworks into action to reap the benefits. This is why Wallarm is the most preferred choice. It endows developers with tailored-made API security solutions that can protect all sorts of Java API, regardless of the nature of OS.