Privacy settings
We use cookies and similar technologies that are necessary to run the website. Additional cookies are only used with your consent. You can consent to our use of cookies by clicking on Agree. For more information on which data is collected and how it is shared with our partners please read our privacy and cookie policy: Cookie policy, Privacy policy
We use cookies to access, analyse and store information such as the characteristics of your device as well as certain personal data (IP addresses, navigation usage, geolocation data or unique identifiers). The processing of your data serves various purposes: Analytics cookies allow us to analyse our performance to offer you a better online experience and evaluate the efficiency of our campaigns. Personalisation cookies give you access to a customised experience of our website with usage-based offers and support. Finally, Advertising cookies are placed by third-party companies processing your data to create audiences lists to deliver targeted ads on social media and the internet. You may freely give, refuse or withdraw your consent at any time using the link provided at the bottom of each page.
Thank you! Your submission has been received!
Oops! Something went wrong while submitting the form.
Reject All
Cookie SettingsCookie Settings
Accept AllSave Selection
Wallarm
>
Wallarm Learning Center
>
What is Elliptic Curve Cryptography? Guide by Wallarm
DevSecOps

What is Elliptic Curve Cryptography? Guide by Wallarm 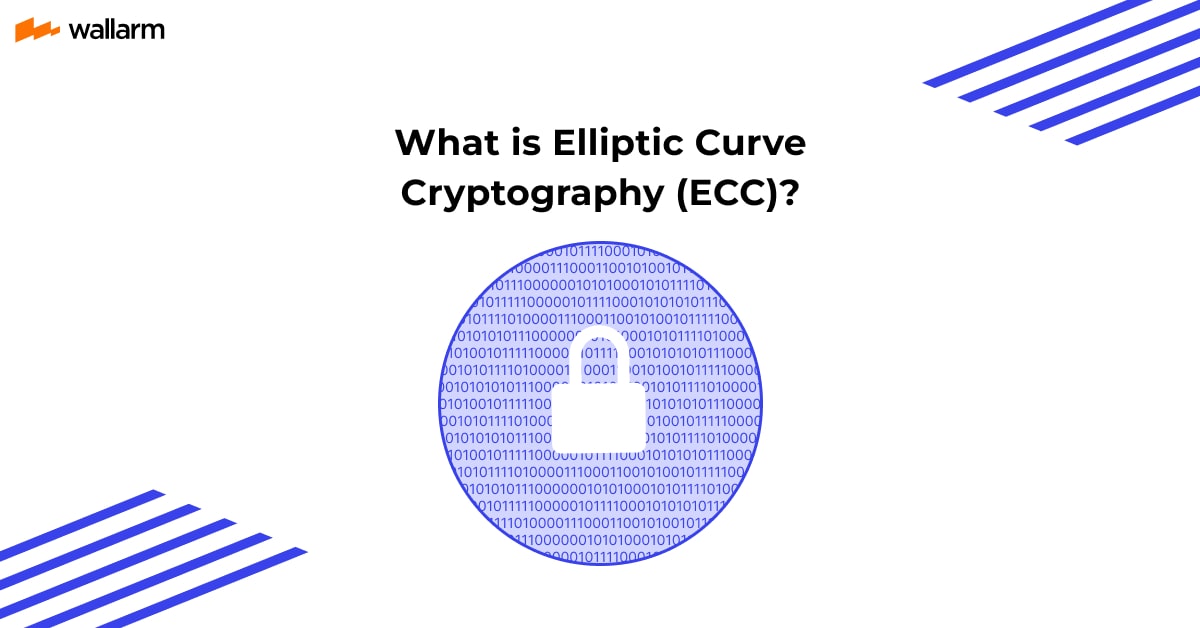 Encryption with symmetric keys is a mathematical technique commonly abbreviated as ECC. It is most often discussed in relation to the RSA (Rivest Shamir Adleman) encryption algorithm. The prime factorization-based encryption of data, emails, and programmes is a one-pass task using RSA. The ECC, on the other hand, is a mathematically distinct encryption technique from the ubiquitous RSA protocol.

Compared to RSA, ECC is a significantly more robust cryptographic approach. Using the mathematics of elliptic curves, public key encryption may be made more secure across different key pairs.

Although RSA uses prime integers to achieve the same goal, ECC is becoming more popular because to its reduced key size and continuing reliability. Devices' capacity to maintain security is being stretched to the limit by the increasing size of keys, and this trend is expected to continue as manufacturers strive to fulfil this rising demand. It is therefore essential to have some prior knowledge of the ECC setting.

In contrast to RSA's use of prime factorization, ECC's public key cryptography approach is based on algebraic structure over finite fields. Consequently, the keys generated by ECC are more difficult to crack numerically. The existing public key cryptography standard, RSA, is vulnerable to attacks, which is why the ECC certificate is seen as a more secure alternative.

Using ECC is the next natural step in guaranteeing high-quality performance and security for the foreseeable future. This is because it is becoming increasingly popular as businesses seek to secure their customers' private data online while also enhancing their website' usability on mobile devices. As more and more sites adopt ECC to protect sensitive data, there is a rising need for a brief introduction to the technology.

An elliptic curve, as defined by the current ECC, is a plane curve over a finite field whose points satisfy the equation y2=x3 + axe + b.

This illustrative ECC can be distorted in no way if any point is rotated 180 degrees around the x-axis. All non-vertical lines must have no more than three points crossing the curve.

Why Did We Start Using Elliptical Curves in Cryptography?

The usage of elliptic curves in encryption dates back to the mid-1980s. Separate proposals for the technology were developed in 1985 by Neal Koblitz and Victor S. Miller, and ECC methods were first widely used in 2004.

The RSA cryptosystem designed by Rivest, Shamir, and Adleman remains the most used public-key algorithm in use today. The area of intelligence security relies heavily on it for things like ensuring the safety of internet communications and vetting computer programmes and other forms of digital property.

The RSA algorithm has provided invaluable service to the security community for many years. Yet, the mathematical and computational power necessary to 'break' RSA keys by factoring big numbers has become increasingly accessible and practicable for attackers to wield. Over time, the ever-increasing RSA key size that is necessary to tackle the risks posed by modern computing and mathematics will become unworkable.

In recent years, multiple researchers have discovered security flaws in RSA public keys. As an illustration, in 2020, researchers at Key factor evaluated more than 75 million current RSA keys over the net and found that 1 in every 172 certificates utilizing RSA keys was susceptible to a viable attack known as "factoring."

Since computers are able to factor huge numbers, the RSA algorithm is believed to be vulnerable whereas the ECC algorithm is considered to be safer. Elliptic curve encryption, on the other hand, relies on the considerably more difficult discrete logarithm problem. Proof exists that, even with today's technology, it would take longer than the age of the universe to reverse engineer an ECC-generated key.

Because of their lower length, ECC keys are more convenient to store and manage than RSA keys, the standard in public-key cryptography. ECC encryption is more efficient than other methods since it requires less computing resources to encrypt and decrypt data due to its shorter keys.

How Does ECC Work?

To visualize an elliptical curve, just plug in the following equation: y2 = x3 + axe + b

If you enter values for a and b, the curve's shape will be calculated for you. In elliptic curve cryptography, these curves are utilized over finite fields to generate an encrypted message that can only be deciphered by the owner of the private key. The problem is harder to solve if the key size is bigger because that means the curve is bigger.

Following is a simplified illustration of how this type of cryptography can be applied in practice:

An elliptic curve is generated using the values of a and b. Then, you can draw a line from point A to point B along the curve until you reach a third point, which we'll call c. Once the line reaches its third point of intersection, we can flip it across the x-axis.

As we move on from point c, we can see that a line drawn from a to c crosses over into another segment of the curve at d. This point is then mirrored across the x-axis, and the procedure is repeated until an endpoint is established.

A "dot" is used to denote the location of each intersection. Below is an illustration of how to describe the intersections:

Those without the private key can easily determine the total number of "dotted" iterations of the equation because they know the number of intersection points.

What Are the Advantages Of ESS?

Algorithms that are simple to run in one direction but complex to run in the other are what make public-key cryptography thinkable. To illustrate, RSA is based on the fact that it is simple to multiply two primes to obtain a larger number, but extremely difficult to factor a large number back into its original primes.

However, RSA requires keys that are 2048 bits or longer to maintain its security. This results in a slow procedure and highlights the significance of key size.

Elliptic curve cryptography's compact size is a significant benefit because it allows for greater processing power in portable gadgets. For two keys of equal size, RSA's factoring encryption is weaker since it is easier and takes less energy to factor than it is to calculate for an elliptic curve discrete logarithm.

When leveraging ECC, smaller keys can provide the same level of fortification. High security with faster, shorter keys compared to RSA; ECC cryptography is a better option for mobile devices in a future where more and more cryptography must be done with less and less computer capacity.

What Is Elliptic Curve Cryptography Used For?

In cryptography, it is one of the most used methods for implementing digital autographs. To sign transactions, the EC Digital Signature Algorithm (ECDSA) is used by both Bitcoin and Ethereum. ECC, however, is not restricted to digital currency applications. Due to its lower key length and increased efficiency, it is effectively becoming the de facto encryption standard for usage in all future online services.

Multiple real-world applications exist for the use of elliptic curve encryption. Online banking and payment systems are one such instance. It is common practice for online retailers to encrypt customers' credit card and debit card details using ECC before sending them over the internet. This safeguards the privacy and safety of your data all during the exchange.

In addition, ECC can be used to encrypt messages sent via email. Popular email encryption software Pretty Good Privacy (PGP) may take advantage of ECC to keep your messages private from anybody but the intended recipient.

Each user of PGP has their own unique group of public and private solutions. The private key must be safeguarded at all times whereas the civic key can be shared with anyone. The recipient's public key is all you need to encrypt an email; your own private key is required to decrypt an email.