Privacy settings
We use cookies and similar technologies that are necessary to run the website. Additional cookies are only used with your consent. You can consent to our use of cookies by clicking on Agree. For more information on which data is collected and how it is shared with our partners please read our privacy and cookie policy: Cookie policy, Privacy policy
We use cookies to access, analyse and store information such as the characteristics of your device as well as certain personal data (IP addresses, navigation usage, geolocation data or unique identifiers). The processing of your data serves various purposes: Analytics cookies allow us to analyse our performance to offer you a better online experience and evaluate the efficiency of our campaigns. Personalisation cookies give you access to a customised experience of our website with usage-based offers and support. Finally, Advertising cookies are placed by third-party companies processing your data to create audiences lists to deliver targeted ads on social media and the internet. You may freely give, refuse or withdraw your consent at any time using the link provided at the bottom of each page.
Thank you! Your submission has been received!
Oops! Something went wrong while submitting the form.
Reject All
Cookie SettingsCookie Settings
Accept AllSave Selection
Wallarm
>
Wallarm Learning Center
>
What is Application Virtualization? Example, Types, Benefits
DevSecOps 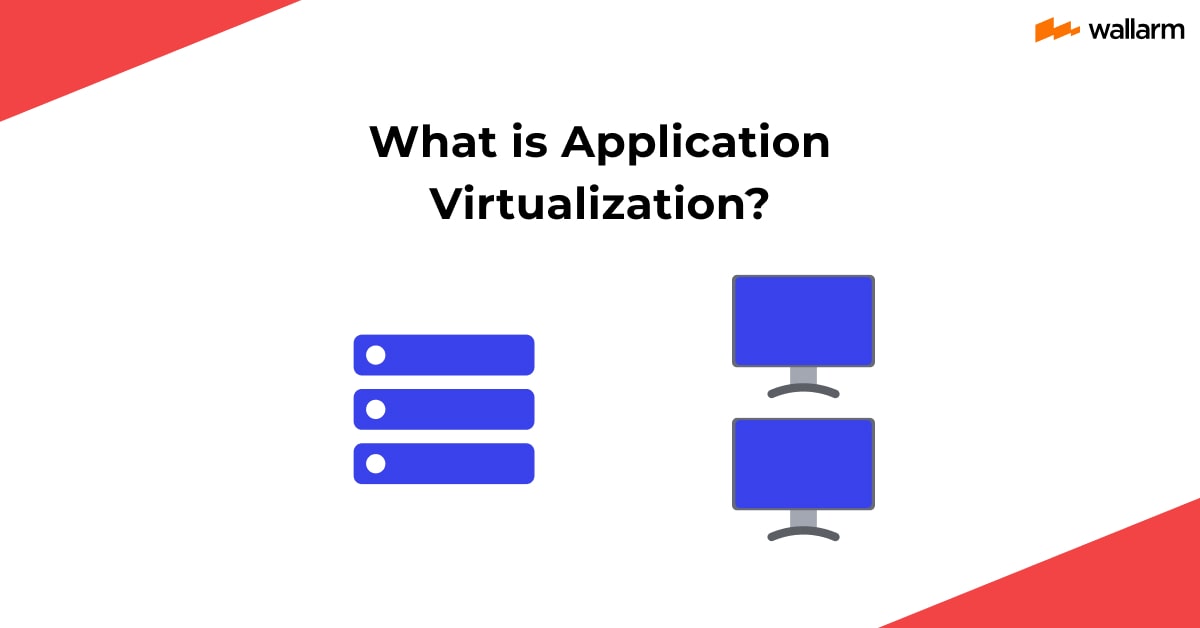 Let’s begin the article with a practical example.

The Microsoft Workstation Efficiency Pack comprises an App Virtualization solution, usually called App-V. Because the program theoretically sits on a framework outside the client device's computer OS, administration and upkeep of the application are made easier.

The program functions exactly as it would if it were installed on the client browser from the user's point of view. The user has keyboard and mouse controls and may navigate or adjust the program window. Although there may occasionally be slight variations, the user should generally experience a smooth transition.

Want a more in-depth and general understanding of the concept? No worries.

Let’s discuss the definition of app virtualization, the ways it works, its pros & cons, applications, and use cases.

What is application virtualization?

It is a technique used to trick conventional software into thinking it directly interacts with an OS's capabilities when it does not. A virtualization barrier must be installed between the program and the OS for this trick to work.

This top-notch barrier or platform has to be able to theoretically run an app's components without affecting the OS below it. By seamlessly redirecting documents and database log modifications to a single piece of software, this procedure takes over a component of the execution environment traditionally provided by the OS.

The program may now exist alongside previously incompatible programs since its processes are consolidated into a single file rather than spreading out over the OS.

The method is effective for the type of software that enables users to access an app from a device other than the one on which it should be properly deployed.

Using this technique, the program behaves and communicates just as it would if it were downloaded directly on the user's computer. The client will have a satisfying experience because of this. Also, the user does not need to deploy the program on the actual device in order to utilize it.

The IT manager often distributes remote apps to a user's computer or other wireless connections from a centralized computer in the association's data storage. Now the customer may utilize and view the program center. The program is then sent to users as though it were natively deployed on their machine using application virtualization software. The server will then carry out the customer's commands.

The advantages of virtualized environments are numerous and include some of the following, which are related to the proliferation of mobile and mixed working environments:

For simplicity of use, corporate apps ought to be available on every companion smartphone. By enabling the delivery of programs to any interface, it provides application flexibility.

Because virtualization technology isolates programs/apps from the underlying infrastructure, you don't need to perform expensive conversions from one sort of OS to the other.

Buying pricey PCs for each one of your workers or customers might become outrageously costly if you have got a large workforce. In this circumstance, app virtualization comes to your aid by enabling you to deploy vital apps to every terminal.

The deployment of internal programs that programmers often update is also possible through virtualization. It enables remote and rapid upgrades, installations, and distribution of these programs. For companies that employ apps, application virtualization is extremely vital.

Professionals may securely access essential programs from wherever thanks to virtualized environments. It is helpful in work-from-home situations since it offers reliability and safety.

When it comes to virtualizing for desktops, it is more related to a remote environment. Even if users change tangible OSs, they can continue to utilize similar functionalities by remotely accessing their virtual network through the Web.

No matter what device is used, the screen is reflected to show the identical situation they might have. This is so that only the user's device may see the customer's data, which is stored on a web server.

On the contrary, application virtualization solutions are isolated from the OS as well as the hardware it uses to function.

Instead of maintaining and executing distinct versions on separate devices, this isolation enables programs to be operated from network infrastructure hardware. Users in these situations often connect to the central data database over the Web to view their programs and related data.

You have a decent knowledge of the former concept; let’s talk about the latter here.

As mentioned, virtualization procedures can happen on various levels, including desktop, server, and application levels. Hence, in the case of servers, it is the most frequently used virtualization strategy in the modern technology sector. Businesses may benefit immensely from using server virtualization as it isolates the parts of the host operating system to analyze the records more efficiently, which boosts system performance.

The application delivery ecosystem as a whole covers a diverse range of methods and technologies that businesses may employ to roll out solutions for their end customers. Many people may think this is a "non-problem." Still, for organizations with multiple users, it may become tough to efficiently and accurately provide apps to each one that meets their needs at the appropriate time. And this is why such enterprises must deploy app virtualization. Hope the article gave you a clear view of the concept.