Privacy settings
We use cookies and similar technologies that are necessary to run the website. Additional cookies are only used with your consent. You can consent to our use of cookies by clicking on Agree. For more information on which data is collected and how it is shared with our partners please read our privacy and cookie policy: Cookie policy, Privacy policy
We use cookies to access, analyse and store information such as the characteristics of your device as well as certain personal data (IP addresses, navigation usage, geolocation data or unique identifiers). The processing of your data serves various purposes: Analytics cookies allow us to analyse our performance to offer you a better online experience and evaluate the efficiency of our campaigns. Personalisation cookies give you access to a customised experience of our website with usage-based offers and support. Finally, Advertising cookies are placed by third-party companies processing your data to create audiences lists to deliver targeted ads on social media and the internet. You may freely give, refuse or withdraw your consent at any time using the link provided at the bottom of each page.
Thank you! Your submission has been received!
Oops! Something went wrong while submitting the form.
Reject All
Cookie SettingsCookie Settings
Accept AllSave Selection
Wallarm
>
Wallarm Learning Center
>
What is an Attack Surface? Definition & Management
Attacks

What is an Attack Surface? Definition & Management 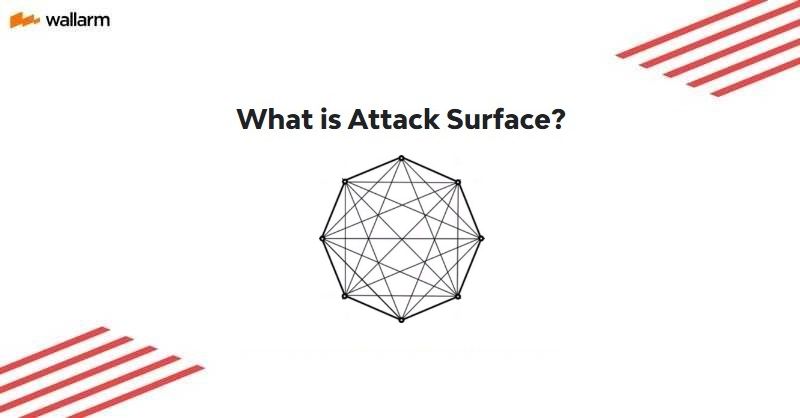 While organizations are busy discovering a cyber-threat deterrence strategy, they often forget to analyze the entire area that is prone to face the wrath of an attack. Knowing the attack-prone surface is vital as it lets ventures determine which strategy is soundest and to which extent its execution is required.

Want to guard your organization from cyberpunks? First, find out your attack surface and shield it. And then let’s also comprehend its meaning alongside its other interconnected details.

What Is An Attack Surface?

In a practical sense, it refers to all the application end-points, software apps, digital tools, security loopholes, and everything else that can help a hacker to gain admission to an individual or organizational data and digital assets. In literal terms, the attack surface definition means absolute area/assets/environment that is gullible to a cyber-attack.

The means that bad actors use to exploit data or digital assets of enterprises or individuals are known as attack vectors. The likelihood of facing digital threats is directly proportional to the attack-prone surface area. More area means high hazard possibilities, as cyberpunks will be proffered with ample prospects. Hence, one must try to keep the surface reduced.

It refers to the digitized possessions and resources used in physical form. Mostly, hardware elements and devices that an organization/individual uses are elements of this category. For instance, data-driven devices, servers, wearable devices, printers, IoT devices, hardware like hard disks & pen drives, and so on.

A threat actor utilizing unauthorized access techniques can effortlessly access all these attack vectors, and they have the potential to cause serious damage.

Have a look at the menaces that a physical attack-surface is likely to bring to life.

It surrounds the all-inclusive digital resources that you use and is unprotected. For an individual, it refers to a website that has weak passwords and is accessed with a protection or antivirus tool or VPN. For a company or its branch, it includes attack vectors falling outside the reach of the firewall used and being released in the public domain without any protection.

It refers to emotionally weak individuals that are linked with your organization in any sense. Such individuals are prone to make rational decisions and can easily fall for the hackers’ trick. Threat actors can trick such employees or associates and force them to steal particular databases or data of their interest.

The technique paves the path for many cyber-attacks. For instance, CSRF attacks, phishing, whaling, and so on. The ideal way to deal with this issue is to educate people about the dangers of cyber threats and encourage them to be responsible while handling confidential business data.

Even though both these terms are used concurrently, they have separate meanings. The attack vector is the pathway leading a threat actor to the targeted data/digital asset of an organization. For example, if a hacker injects malicious code into the company’s server that later manipulates the database, the attack vector in this situation is the server.

Combine all attack vectors within a business’s scope, and you’ll have an attack surface. Every in-house and 3rd party digital resource used, directly and indirectly, is its component.

Attack Surface Analysis And its Cruciality for you

Sound IT security infrastructure is doable only when one has insights into the attack-prone surface perils. Attack surface’s analysis is useful here. The term is used for the process of comprehensive analysis and figuring out hazardous attack vectors.

Even if it’s a labor-extensive task, it’s worth a shot. Organizations seeking improved attack surface cyber security should invest in it heavily as:

How Do You Determine The Attack Surface Of Your Organization?

As mentioned above, the attack surface comes with a wider periphery, and it’s not easy to have a clear distinction between what’s included in it and what’s not. However, one must clearly know the organizational attack surface for quick and effective hassle

Think about every crucial path via which data comes and goes in. They all are attack vectors. Every deployed security control like data validation tools, user authentication software, activity-logging technology, and so on is part of it.

Assess the kind of data your business uses and shares. Wherever that data goes, include those destinations in the attack-surface.

Figure out all these things and bring them together; you’ll have attacked the surface of your venture.

What Is Attack Surface Management?

ASM is the practice of ensuring that hackers have the least possible access to your attack-surface and that all the attack vectors are protected. It keeps threat actors’ thought processes at the pivot and allows organizations to do early and real-time threat detection and remediation.

ASM is done with the help of various automated tools like Attack-surface Detector tools, Sandbox Attack Surface Analysis Tools, and so on. They all are fully automated software keeping track of the suspicious activities happening in and around the attack vectors.

On a per-case basis, organizations can easily use these tools for internal and external attack surface management.

Tips to Reducing Your Attack Surface

As mentioned above, a wide attack-prone surface is a matter of concern for organizations and individuals. Hence, it’s very crucial that everyone should make an effort to keep it under control. Even though it’s a tough task, it’s achievable by following a few rules.

‍Follow these above-enlisted rules and enjoy the improved system and organizational security.