Privacy settings
We use cookies and similar technologies that are necessary to run the website. Additional cookies are only used with your consent. You can consent to our use of cookies by clicking on Agree. For more information on which data is collected and how it is shared with our partners please read our privacy and cookie policy: Cookie policy, Privacy policy
We use cookies to access, analyse and store information such as the characteristics of your device as well as certain personal data (IP addresses, navigation usage, geolocation data or unique identifiers). The processing of your data serves various purposes: Analytics cookies allow us to analyse our performance to offer you a better online experience and evaluate the efficiency of our campaigns. Personalisation cookies give you access to a customised experience of our website with usage-based offers and support. Finally, Advertising cookies are placed by third-party companies processing your data to create audiences lists to deliver targeted ads on social media and the internet. You may freely give, refuse or withdraw your consent at any time using the link provided at the bottom of each page.
Thank you! Your submission has been received!
Oops! Something went wrong while submitting the form.
Reject All
Cookie SettingsCookie Settings
Accept AllSave Selection
Wallarm
>
Wallarm Learning Center
>
What Is a Swagger Editor?
DevSecOps

What Is a Swagger Editor? 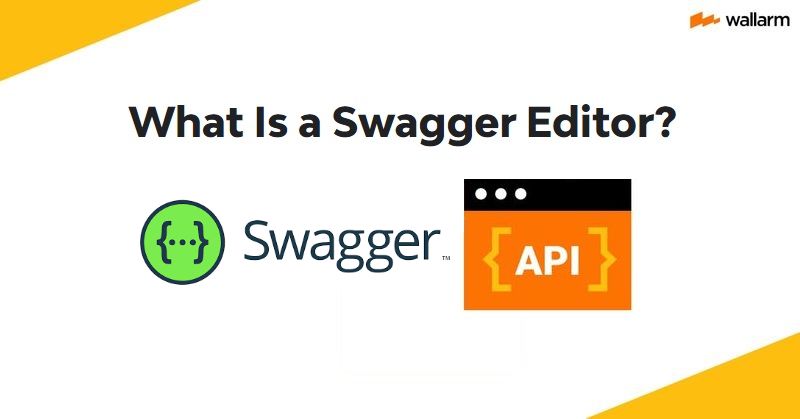 Everyone is talking about API and its amazing ability to make application development easier than before. However, API is only useful when it’s used diligently. Swagger is great to make it happen. Famous as a guiding set of rules, Swagger is an open-source resource useful for understanding RESTful API. Learn more about it and its use case scenarios.

You can consider it a set of norms. To keep it simple, this is a collection of tools, specifications, and instructions offered freely. Anyone who is willing to elaborate and develop RESTful APIs can make use of the Swagger framework.

It allows an API to define its structure which plays a crucial role in API document development.

It’s Swagger only that can assist people create easy-to-read API documents that further help in the need-based and effective use of APIs.

While Web API came into the world in 2005, Swagger took more time to show up. The project was first created by Tony Tam in 2011. It happened when he was working on Wordnik, an open-source dictionary website. Tony Tam developed the framework with the sole purpose of making API documentation and automation straightforward, which was way too complex back then.

After complete development, the project was released into the public domain. Slowly and gradually, Swagger gained traction and became popular among API development experts. Professionals started using Swagger API as a basic and mandatory resource for developing APIs.

SmartBear Software, the organization handling this framework, played a crucial role in developing the OpenAPI framework. In 2016, it became OpenAPI Spec (or specification). At present, it’s accepted as the most renowned and acknowledged framework that API creator professionals and security experts use at the global level.

In case you’re wondering how Swagger API or API Swagger is crucial for API writing, you must understand that this framework.

As specified in Swagger definition, makes the entire process standardized and uniform. In its absence, it’s obvious to experience variations in API design explanation, document format, and many other things.

This API is made of multiple things and offers a wide range of functions. In order to make the most of the Swagger API, you need to understand every single key aspect of its components and functions. We present you with a crisp overview of them.

One of the most famous and useful components of Swagger is Swagger Editor. It allows API developers to edit and & write API documents and OpenAPI specifications with full customization. The tool is accessible via any browser and can run it locally. If you want to use it on the host, use SwaggerHub. Here are some of the key features of this component.

Framework’s Editor ensures that none of the errors go unnoticed as you’ll be notified in real-time the moment you experience it. It even allows you to remove that specific row that has an error.

Don’t want to write the same thing again and again while creating API documentation? Well, Swagger’s Editor can help you with it. It lets you auto-fill the commonly reoccurring information and speed up the API documentation creation process.

Despite offering so many capabilities, it isn’t a tough tool to use. In fact, it comes with a very user-friendly interface that lets you customize the entire process of API documentation. It won’t ask much of coding. Hence, getting started and using it is very easy.

Swagger UI is that component of the framework that comes into play when API documentation is created and is now ready to be shared with the developer community. It is used to present OpenAPI specifications in a highly readable and engaging manner.

The component extracts the YAML file from the documentation and converts it into a human-readable format that allows API users to make API calls straight away from the browser.

Swagger UI is loved by many because of some of its exceptionally good features. For instance, it’s highly flexible and can get along well with all of your existing applications. Its integration abilities are of top-notch level.

You can set it up on the cloud, in the node package, or locally. It’s very interactive. With the help of its ‘Try it out 'button, you can easily turn any query parameter into a field and use it to make an API opposing call.

Swagger lets you work with multiple servers at a time. You can work with Java server, Node server, Go server, and Scala server while working its Codegen. You can use any server that is suitable for backend and frontend implementation.

Swagger Codegen supports customized SDK development for API. The supported languages are C#, Java, JavaScript, Swift, and many more. To make the SDK generation easy, you have wrapper classes that are useful to make an API call without HTTP responses/requests.

Developing APIs is a time-consuming task asking for constant focus on aspects like proper error handling, strict adherence to codes & protocols, ensuring code modularity, and so on. A bunch of pre-built and automated API development tools are offered by Swagger that helps in quick code development and deployment.

CodeGen is an open-source tool that Swagger offers to create boilerplate code during API creation. The tools are a great helping hand for API developers as it allows them to have a constant focus on business logic. It makes development process seamless and streamlined.

It is the function that comes after code writing. Even though the job is very tedious. Swagger tries to reduce the complexity by allowing developers to create API documents in any format. Also, it plays a crucial role in API generation & maintenance.

There is no need to change documents whenever there are any alterations in code. Any change will be auto-updated by Swagger. The framework is also useful for creating API documents for different versions of the same API.

Swagger is crucial for this step as well. It permits performance, security & functional testing of the APIs designed adhering to the OpenAPI norms. ReadyAPI platform is used to conduct multiple API tests.

Swagger Inspector is a key component used in API testing, allowing experts to keep an eye on the API calls & returned answers in order to make sure that it is functioning properly.

OpenAPI is a globally adopted standard that anyone has to follow during RESTful API development and writing. With strict adherence to OpenAPI, developers ensure that they are creating RESTful APIs that anyone in the world can use and expect uniform outcomes. It aims to bring seamlessness in RESTful APIs while paying due diligence on API security, error handling, API versioning, and other key stuff.

It is applicable in both scenarios: when one wants to develop a RESTful API from scratch or update the existing API. In its early developmental stage, OpenAPI was Swagger only. What was the Swagger API in the beginning later became OpenAPI Specification when the developers handed it over to the open-source group. The same is the explanation for why OpenAPI’s spec has many Swagger-based tools to offer.

For instance, SwaggerHub, a part of OpenAPI, is great when it comes to building API in a browser-based editor so that one manages to adhere to all the compulsory design and API security standards.

Swagger Inspector is the next useful tool that people can use to create customized APIs.

Having a mere look at your OpenAPI-adhering file will help one to comprehend all specifications of your API features. Referring to it will help an API developer to describe an API in all of its offered endpoints and operations.

To add to the above, it also educates API developers about what authentication methods one has to adopt for API, the license it carries, and the Terms & Conditions. In short, an OpenAPI-specification file is like a blueprint of an API.

They are closely linked as both are crucial for API designing as well as document-creation. OpenAPI Spec targets RESTful API, while the latter can be used for all sorts of APIs. The former is a specification, while Swagger is a toolkit.

With Swagger, you can work with one server at a time. OpenAPI can work with numerous servers at a time. Every the said framework too follows OpenAPI, but the opposite of this may not be true. A more detailed comparison of OpenAPI Vs Swagger

As Postman is also an API testing resource, it’s obvious to consider it the same as Swagger. But, they are not the same. Postman wasn’t an API testing solution like Wallarm’s API Security platform since the time it came into being. It was a Chrome app earlier and later became a tool for API testing & development. We all know what Swagger is; it’s the collection of rules and regulations that allows one to document his API effortlessly.