Privacy settings
We use cookies and similar technologies that are necessary to run the website. Additional cookies are only used with your consent. You can consent to our use of cookies by clicking on Agree. For more information on which data is collected and how it is shared with our partners please read our privacy and cookie policy: Cookie policy, Privacy policy
We use cookies to access, analyse and store information such as the characteristics of your device as well as certain personal data (IP addresses, navigation usage, geolocation data or unique identifiers). The processing of your data serves various purposes: Analytics cookies allow us to analyse our performance to offer you a better online experience and evaluate the efficiency of our campaigns. Personalisation cookies give you access to a customised experience of our website with usage-based offers and support. Finally, Advertising cookies are placed by third-party companies processing your data to create audiences lists to deliver targeted ads on social media and the internet. You may freely give, refuse or withdraw your consent at any time using the link provided at the bottom of each page.
Thank you! Your submission has been received!
Oops! Something went wrong while submitting the form.
Reject All
Cookie SettingsCookie Settings
Accept AllSave Selection
Wallarm
>
Wallarm Learning Center
>
What is a Kubernetes pod? Lifecycle Explanation
DevSecOps

What is a Kubernetes pod? Lifecycle Explanation 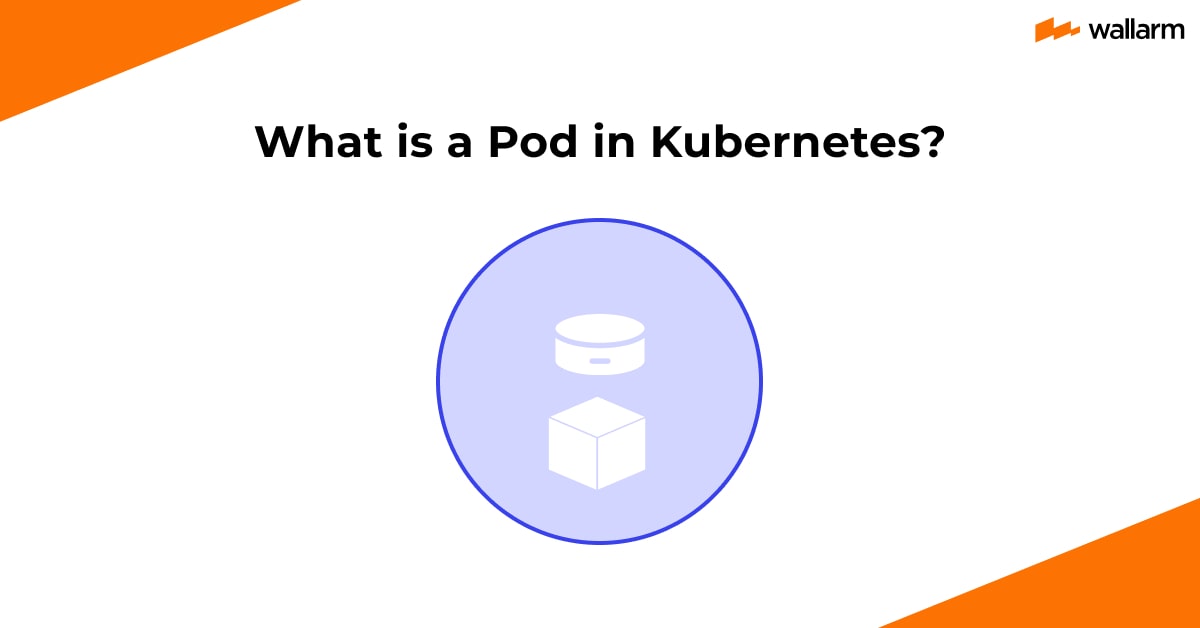 Kubernetes is made of multiple components, and Pod is one of them. It is called the most basic and imperative entity, and is what makes Kubernetes functional. Learn more about k8s Pods in this post, as we bring its much-concerning information to the surface for you.

Let’s begin with its meaning before we move to other complicated details about it.

What Is a Kubernetes Pod?

A Pod is a term that we use to denote a single and independent instance that a functional Kubernetes cluster features. It’s the smallest viable object of the Kubernetes ecosystem.

On a broader plane, Pod can be explained as:

Whatever resources Pod has, its related containers will them in a shared manner. Mostly, a Pod features one container only. But, the advanced use cases often demand the execution of various containers in a single Pod.

The included containers use localhost to interact mutually. For this, k8s Pods will define a storage volume that will be shared by these containers – depending upon their requirement.

As you’re trying to understand Pod’s significance, you must be aware of the role of SSH in Kubernetes Pod. Using SSH is an easy way to keep Pods secured in a public and private cloud. SocketXP is the authorized tool for the use of SSH in k8s Pods.

They are where Pods run inside a cluster. Pods show great loyalty to the respective nodes as they remain on the nodes as long as the process continues. It leaves the node only when it’s deleted.

Often lack of resources or node failure can also cause the detachment of Pod from the nodes. Pods are not dependent on nodes. Therefore, any node failure will lead to automatic Pods deletion.

Kubernetes Pod environment variables are the ones declared in the configuration (check the section on creating pods in the article by scrolling down.

What Does a Pod Do?

After having basic clarity on Pod meaning, it’s time to understand what it does. The controller creates Pods and uses them for multiple purposes. For instance:

This is the simplest pod type as it features only one container per pod. It is often used for workloads deployments. Its generation is easy and requires only a kubectl command. Here is an example:

As more than one container is used, handling multi-container pods is tough. Every independent Pods are capable of interacting with each other. Here is an example generated using Kubernetes Pod YAML.

Why Do Kubernetes Use Pod?

Kubernetes uses Pods mainly for workload deployments. Based on the type of pods used, different functions are handled. For instance, static Pods help k8s to run a self-host control plane.

Multi-container Pods create a unified way to handle all the included containers. Every Pod is responsible for proceeding with single instances of a specific application, and the k8s setup uses them to scale an application horizontally.

Pods are short-lived and tend to get deleted/eliminated/non-functional for multiple reasons. As a Pod gets terminated, its existence will be completely wiped out. Pods remain functional until users or the controller deletes them.

Any damage to Pods is not self-healed. Controller intervention is required. The entire lifecycle of Pod is dependent on the nodes. If nodes fail or delete, attached Pods will also be deleted or failed. PodStatus API object is the part of every Pod and is represented using the status field of the Pod. This field also features Pod phase details which is a detailed summary of the present state of a Pod.

Throughout its lifecycle, a Pod is likely to be present in any of the below-mentioned phases.

In this phase, a Pod is fully created and is introduced to the cluster, but is not fully processed as one or many of its corresponding containers are not under process. Also, the time that Pod spends on an active node and image download is referred to as a pending phase.

A Pod is said to be in the running phase when it’s linked to a node, and all the containers are active.

When all the Pod containers are successfully terminated, it’s known as a succeeded phase.

This phase arrives upon the successful termination of containers of a pod, where one/multiple containers are terminated during a node failure.

When there is no clarity on where and what a Pod is doing, it is said to be present in an unknown phase.

As one tries to understand the basic meaning of Pod in Kubernetes, it’s essential to know that generating separate Pods is not at all recommended. In fact, it’s recommended to generate multiple sets of matching Pods that we know as replicas.

Management, which includes Pods’ lifecycle, modifying the number of Pods, and horizontal scaling, of such Pods, is done using a controller. Even if you need to contact Pods for debugging, inspection, and troubleshooting, you must use only the controller.

Now, you can open file in Kubernetes Pod to create it through YAML, or run a CLI command to achieve the same. If using a YAML configuration, the syntax will be:

On the contrary, the syntax for the command for pod creation is:

Every Pod will demand certain CPU storage or memory to remain functional. As soon as a Pod starts running, a Pod request is made to ask this. With this request, Pod instructs Kubernetes that it requires a proper space on a node to process the workload.

Unanswered or responded Pod request means Pod failure, as it signifies that the node doesn’t have enough space to host the Pod. While you define Pod requests, adhere to these facts.

As mentioned above, Pods run on nodes. With Pod limits, we refer to the CPU space or memory that a Pod can consume while running on nodes. In general, there are no limits imposed. But, for effective space distribution, you’re advised to set Pod limits.

If you are no longer a Pod and want to get rid of it, use the command $ kubectl delete pods <pod-name> and its existence will be fully wiped out.

If you’re using shared or replica Pods, make sure you delete that replica Pod first.

As explained previously, containers reside within Pods, and a Pod can carry single or many containers.

A container is a very functional entity that supports app development in k8s by providing a collection of applications and execution ecosystems.  At the very fundamental level, containers feature networking and storage configuration that Kubernetes uses when a Pod runs.

A Pod is a self-sustaining higher construct, while a container is a self-contained lower construct. Pods can create containers, but the vice-verse is not true. The container can’t run directly. It requires Pod to carry it inside a workload.

On the contrary, a Pod is an independent unit and can run directly on a node. You can consider the container as part of a large shipment, Pod, that will not reach its destination if it gets disintegrated from that large shipment.

Kubernetes is entirely based on containers, Pods, and nodes. As we just explained container v/s Pods, let’s switch to nodes v/s Pods. Well, if Pods are the shipment, nodes are the shipping partner that carries shipments.

A node is an element in a typical k8s cluster, which could be a physical/virtual machine. The role of a node is to provide a running mean for Pods.

Each Pod will ask for a specific memory on the node. A node exists to supply an ideal hosting ecosystem for the applications, while Pods are crucial for application defining and deployment.

The Pod is important for Kubernetes as it leads to seamless workload deployment. The post explained this entity in detail. Some of the key insights that we gained in this post are:

As you use Kubernetes, having insights on Pods and their processing is important.