Privacy settings
We use cookies and similar technologies that are necessary to run the website. Additional cookies are only used with your consent. You can consent to our use of cookies by clicking on Agree. For more information on which data is collected and how it is shared with our partners please read our privacy and cookie policy: Cookie policy, Privacy policy
We use cookies to access, analyse and store information such as the characteristics of your device as well as certain personal data (IP addresses, navigation usage, geolocation data or unique identifiers). The processing of your data serves various purposes: Analytics cookies allow us to analyse our performance to offer you a better online experience and evaluate the efficiency of our campaigns. Personalisation cookies give you access to a customised experience of our website with usage-based offers and support. Finally, Advertising cookies are placed by third-party companies processing your data to create audiences lists to deliver targeted ads on social media and the internet. You may freely give, refuse or withdraw your consent at any time using the link provided at the bottom of each page.
Thank you! Your submission has been received!
Oops! Something went wrong while submitting the form.
Reject All
Cookie SettingsCookie Settings
Accept AllSave Selection
Wallarm
>
Wallarm Learning Center
>
What a Virtual Machine (VM)?
DevSecOps

What a Virtual Machine (VM)? 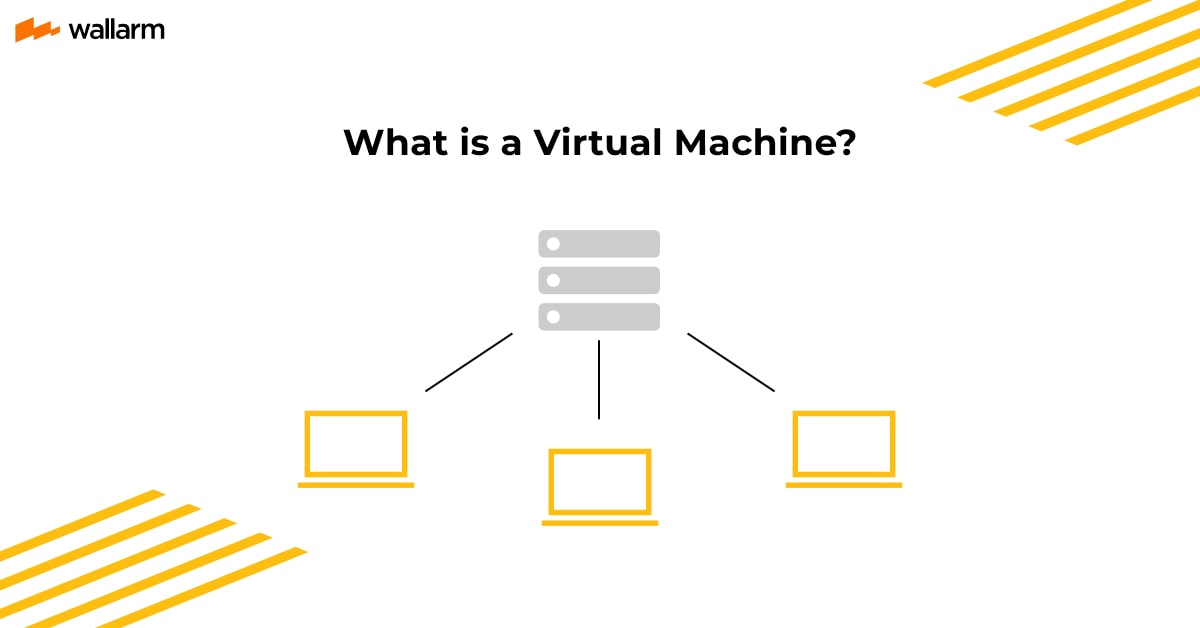 Making a digital duplicate of a stored device is termed "virtualizing" it. It is often defined as a freeware package with apparatus processor aptness. In virtualization, a distinguished application mimics the hardware process to generate a processor milieu.

What Exactly is a VM (Virtual Machine)?

A virtual machine is a freeware that simulates computer hardware. "The Guest" denotes the application, while "host" states the drive/hardware. They're usually interchangeable.

Virtually it aids one bodily computer to take care of numerous virtual PCs, each with its OS and apps. It can't talk to real ones. Alternatively, it practices a hypervisor/virtual machine recorder to connect with the apparatus. Each machine has its processors, RAM, and disc space. It isolates each virtual computer to prevent issues.

When mounted on a PC or server, a hypervisor permits the solid machine to properly divide its freeware system from its hardware to the course. The structure is afterward able to divide itself into several separate "virtual computers."

After that, each of these newly created VM can independently run its own programs and freeware system while still sharing the original assets provided by the bare metal server managed by the virtual machines. mainframe, RAM, storage, and additional assets are included here.

The hypervisor performs a character similar to that of a traffic cop; it directs and assigns the assets of the bare metal to each of the frequent new virtual computers. It aids in ensuring that the gadgets do not interfere with one another.

The majority of hypervisors fall into one of the following classes:

What Are Virtual Machines Used For?

You can shield the hardware/drive assets of a computer from its actual surroundings using imitation. This method has potential programs in a assortment of disciplines. Here are five examples:

Advantages and Disadvantages of Virtual Machines

Due to their adaptability, virtual machines find widespread application in the professional and corporate worlds.

The advantages of virtual machines include the following:

The drawbacks of virtual machines include the following:

There are two main categories of VMs available to users:

Virtualization is known as emulating many computers' worth of software and hardware resources within a single machine. When multiple people can use the same physical facilities, efficiency is maximized. The operational versatility that virtualization provides is enticing more and more enterprises to use it.

Listed below are the six most common kinds of virtualization. When used, each of them influences a unique set of components.

A container can be considered a digital computer to help you understand VM. A hypervisor is used to emulate physical hardware in conventional on-premises and cloud virtualization. Each virtual machine (VM) consists of a guest operating system, a hardware emulation of that OS, an application, and the libraries and dependencies required by that application.

Containers emulate the operating system rather than the hardware; therefore, the only things present in a container are the necessary software components. Since containers don't need a guest operating system, they're small and easy to move around.

Kubernetes and containers work nicely with cloud-native and microservices designs. While containers are most commonly associated with stateless applications, you can also use them for stateful services.

Because of their uniformity across laptops, the cloud, and on-premises IT, containers are widely used in hybrid cloud settings.

Setting Up a Virtual Machine

The virtualization platform determines the VM setup process. Many platforms offer wizards and other facilities to create and deploy VMs. An admin can create a VMware vSphere VM using a template, clone, or from scratch. The New Virtual Machine wizard in vSphere guides the user through building a new or cloned VM.

Before deploying VMs, users should check the virtualization platform's documentation.

Through the use of virtualization softwares vendors, fewer actual machines are required. As a result, server expenses are reduced due to higher rates of resource use. However, since Docker's release, containerization has become increasingly common, providing an alternative to server virtualization for businesses with only a single OS requirement. By eliminating the need for a hypervisor and allowing several containers to share a single installation of an OS while executing directly on the server's hardware, containerization is able to significantly outperform server virtualization technologies in terms of efficiency.

As such, we'd like to recommend the following five virtualization providers:

VMware Workstation Player, formerly Player Pro, is a hypervisor program. "Virtual Machine Isolation" in the app protects your host machine from viruses. Copy and paste between the guest and physical computer and optimize Virtual Machine memory.

Parallels Desktop 16 is the fastest way to run Windows apps on Mac. Virtual Machines support all Windows and Intel-based macOS versions since Windows 2000.

It creates, manages, and runs Virtual Machines like other apps. It also offers 'Live Migration' to move a Virtual Machine from one host to another without halting active applications.