Privacy settings
We use cookies and similar technologies that are necessary to run the website. Additional cookies are only used with your consent. You can consent to our use of cookies by clicking on Agree. For more information on which data is collected and how it is shared with our partners please read our privacy and cookie policy: Cookie policy, Privacy policy
We use cookies to access, analyse and store information such as the characteristics of your device as well as certain personal data (IP addresses, navigation usage, geolocation data or unique identifiers). The processing of your data serves various purposes: Analytics cookies allow us to analyse our performance to offer you a better online experience and evaluate the efficiency of our campaigns. Personalisation cookies give you access to a customised experience of our website with usage-based offers and support. Finally, Advertising cookies are placed by third-party companies processing your data to create audiences lists to deliver targeted ads on social media and the internet. You may freely give, refuse or withdraw your consent at any time using the link provided at the bottom of each page.
Thank you! Your submission has been received!
Oops! Something went wrong while submitting the form.
Reject All
Cookie SettingsCookie Settings
Accept AllSave Selection
Wallarm
>
Wallarm Learning Center
>
WebSocket vs HTTP: How are these 2 Different?
API Security

WebSocket vs HTTP: How are these 2 Different? 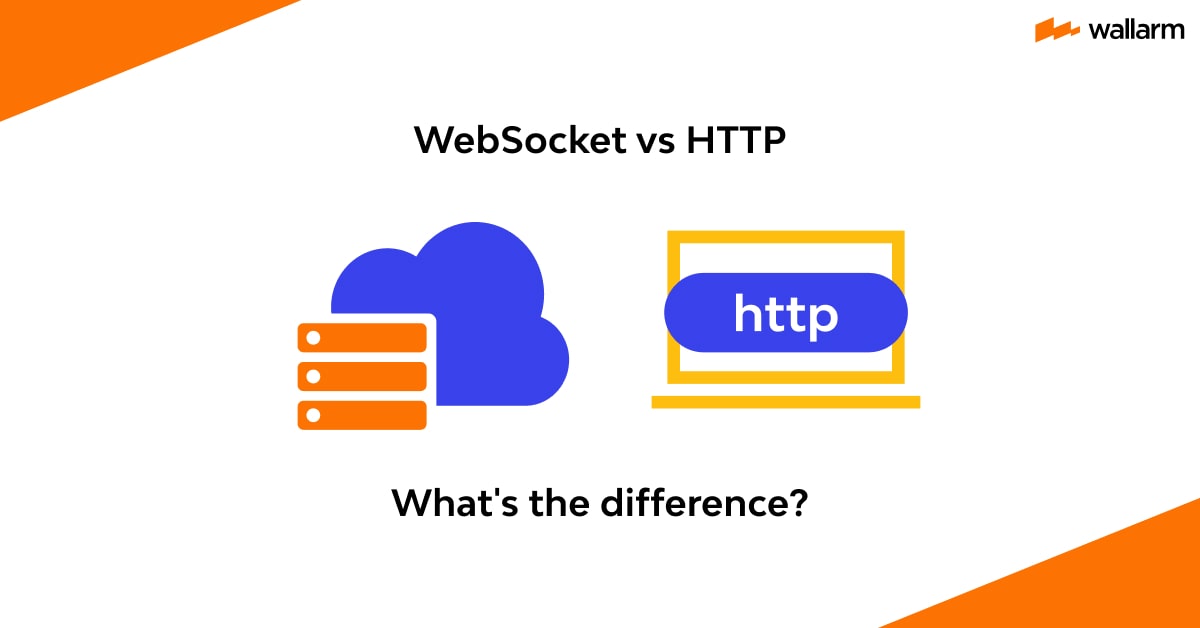 The base of the entire digital world is the communication happening between people through machines. The authorized client creates a request, the recipient server accepts it, interprets it, and provides an appropriate response. This is what a common person knows about digital communication. However, what goes on backstage is far too complex and tedious.

Having clarity on these two, their similarities, functionalities, and other stuff is essential to make sure that the right option is picked as per the need of the hour. This post is all about this.

Let’s start with understanding HTTP. This is perhaps the most widely used and timed request-response protocol used in the digital communication paradigm. Its first version was made public in 1989 at the hands of Tim Berners-Lee. This primitive version of HTTP was basic and had narrow implications. Soon it was revised in a way that it alone become capable to back large-scale browser and server-based communication. It’s a unidirectional protocol. It means that only one part of the communication will take place at a time.

The client sends/forwards a request so that the server could proffer an appropriate and exclusive response.

Some of the distinct features of HTTP are mentioned below:

The HTTP Working Group is responsible to manage and control the use of HTTP across the world. The body keeps a record of every HTTP version and modifications done.

Up next, we are going to explain the key version of HTTP.

The earliest version of HTTP, HTTP/1.1 was way more advanced than the basic HTTP protocol. It’s the most corroborative version and works with most browsers as well as servers. It was an upgraded variant of the ancestral HTTP protocol because it authorized both pipelined and uniform connection, a new range of header fields for both requests and responses, and dynamic communication in real-time.

The most prominent HTTP/1.1 headers are:

It is the first type of HTTP header and is responsible to establish a successive data transmission between two or more hosts.

This kind of communication permits the protocol to use an active connection to share multiple requests. It leads to trimmed request latency as a one-time TCP- 3-ways handshake persists after the 1st request to establishing a connection. Because of this reason, the speed remains higher than the standard speed.

Evaluation of this header was a great move as clients are not required to initiate new connection requests for each received response/answer. That’s how http persistent connection vs websockets are different in their working methodology.

It is useful when one needs to exalt the existing mode. WebSocket is a real-life example of this kind.

It’s an advanced version of the customary request/response mechanism wherein the client takes the help of polls to find out whether the server is interested to get information. It’s widely used in the case of RESTful APIs.

Out of its various kinds, long polling is preferred as it ensures that the modernized data/information is forwarded as soon as it’s received. It keeps the communication link open for a longer time. The short polling method takes the help of an AJAX timer to confirm if there are requests coming from a client at periodic intervals.

In this mechanism, the server supplies instant reply. An empty/null buy prompt response will be provided when no new request exists. When HTTP long polling vs WebSockets is concerned, it’s crucial to know that the overheads are less with the latter.

This method follows the ‘push’ principle of data transmission. It enables a single HTTP connection for data forwarding to and fro for the client & server. The path for data transmission, here, stays unobstructed for an interminable time.

This guarantees that data transmission takes place in any situation. Also, it’s an easy way to ensure continuous data delivery that makes it a perfect WebSocket alternative. The above approach is not flawless. Any intermediary/intruder can hugely trouble the connection or eavesdrop.

Used in social media or single-page apps, the HTTP/2 mechanism intends to make the server proactive in a way that the assets such as scripts, style sheets, and media are pushed actively and in advance to the client’s cache.

In this mechanism, data is represented in binary code over TCP so that numerous parallel requests/responses can be disseminated. The problem with HTTP/2 is that it’s not acceptable by all browsers. Also, if you’re using proxies or hosts, you‘ll have trouble selecting the push information adequately. The one fact that you should know about HTTP 2.0 vs WebSocket is that WebSocket is fully standardized while HTTP/2 is not.

One of the most recent HTTP versions, HTTP/3 was introduced in 2018 and soon make popular. It tends you act like essential support for Web3 as it aims to establish an utterly secured and reliable connection regardless of the device type.

The data transmission flaws of HTTP/2.0 were fixed in HTTP/3 by using UDP. All the above versions of HTTP used TCP. But, HTTP/3 used UDP that fix every data transport issue.

The use of UDP reduces latency by all means. Also, it reduces the relative overheads and is suitable to use in time-sensitive applications. However, HTTP/3 fails to claim 100% perfection as drawbacks like transport layer ramification, data integrity issues, and lack of full standardization exit.

Advantages and disadvantages of HTTP

HTTP is a mixed bag with an equal amount of pros and cons. Knowing them is important to avoid any last-minute hassles.

With HTTP, you have an upper hand as:

But, there are some unavoidable cons with HTTP.

Dedicated to API communication, this protocol enabled bi-directional communication. It is capable of fetching real-time data. Build over TCP, WebSocket makes real-time data push to a client. It supports proxies when used with HTTP ports 443 and 80.

Advantages and disadvantages of Websocket

Have a look at your gains and losses with this protocol. Using WebSocket is a smart move as you enjoy perks like:

But, WebSocket isn’t always a great deal to make as it features drawbacks like:

When or When NOT to use WebSocket?

WebSocket can make digital client-server communication perfect at every front, provided you know the ideal usage scenario. Using WebSocket for establishing connection between APIs will bring desirable results when it is used for developing:

The above text might make you think that WebSocket is utterly useful. It is indeed; but not always. WebSocket shouldn’t be used when there is no need to fetch real-time data and the connection shouldn’t be kept open for long. If you need to access old data only when the request is made, using HTTP is a wise move.

Choosing the right kind of protocol for the API is a crucial decision to make that demands utmost attention of developers.

The kind of protocol you pick also determines the API security. Hence, playing smart is the only viable option.  HTTP and WebSockets are the two most-loved API communication protocols. Each has an edge over the other and caters to different needs.

Before you pick one, make sure you’re clear about your development aim. For instance, if your application needs to fetch static data then use HTTP. WebSockets are the best bet to make when data has to update and upload in real-time.  Make a choice that aligns well with your development goals.