Privacy settings
We use cookies and similar technologies that are necessary to run the website. Additional cookies are only used with your consent. You can consent to our use of cookies by clicking on Agree. For more information on which data is collected and how it is shared with our partners please read our privacy and cookie policy: Cookie policy, Privacy policy
We use cookies to access, analyse and store information such as the characteristics of your device as well as certain personal data (IP addresses, navigation usage, geolocation data or unique identifiers). The processing of your data serves various purposes: Analytics cookies allow us to analyse our performance to offer you a better online experience and evaluate the efficiency of our campaigns. Personalisation cookies give you access to a customised experience of our website with usage-based offers and support. Finally, Advertising cookies are placed by third-party companies processing your data to create audiences lists to deliver targeted ads on social media and the internet. You may freely give, refuse or withdraw your consent at any time using the link provided at the bottom of each page.
Thank you! Your submission has been received!
Oops! Something went wrong while submitting the form.
Reject All
Cookie SettingsCookie Settings
Accept AllSave Selection
Wallarm
>
Wallarm Learning Center
>
UDP flood attack
Attacks, Vulnerabilities 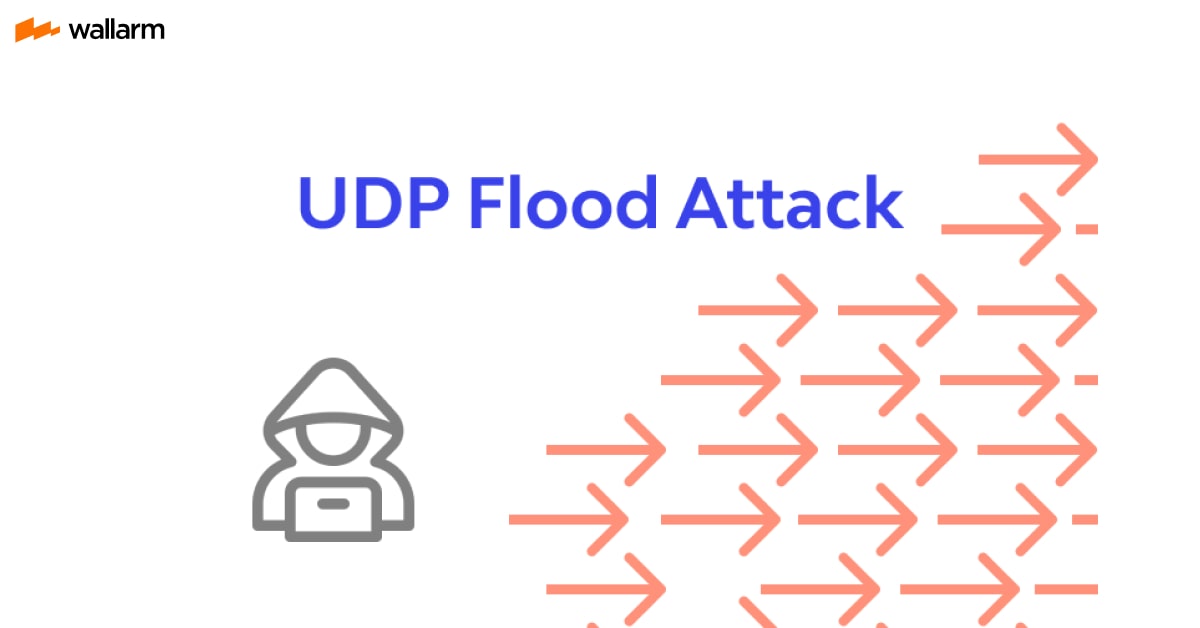 A "UDP flood" is any assault in which the assailant floods IP packs giving UDP datagrams to the weak ports of the difficulty structure similar to DDoS attacks.

The lenient host checks for applications related with these datagrams and—discovering none—sends back an "Objective Unreachable" bundle. As effectively more UDP packs are gotten and replied, the design gets overpowered and torpid to different customers.

The attacker may also impersonate the IP address of the packages in the construction of a UDP flood attack, both to ensure that the return ICMP groups do not appear at their host and to anonymize the assault. A UDP flood assault may be carried out using a variety of mechanically available programming packs (e.g., UDP Unicorn).

How does the UDP flood attack work?

A UDP flood works principally by misusing the means that a worker takes when it reacts to a UDP bundle shipped off one of its ports. Under typical conditions, when a worker gets a UDP bundle at a specific port, it goes through two stages accordingly:

A UDP flood can be considered with regards to a lodging assistant steering calls. To begin with, the secretary gets a call where the guest requests to be associated with a particular room. The secretary then necessities to glance through the rundown, all things considered, to ensure that the visitor is accessible in the room and willing to accept the call. When the secretary understands that the visitor isn't accepting any calls, they need to pick the telephone back up and tell the guest that the visitor won't be accepting the call. On the off chance that abruptly all the telephone lines light up all the while with comparable solicitations, they will immediately get overpowered.

As each new UDP parcel is gotten by the worker, it goes through strides to handle the solicitation, using worker assets simultaneously. At the point when UDP bundles are sent, every parcel will incorporate the IP address of the source gadget. During this kind of DDoS assault, an assailant will commonly not utilize their own genuine IP address, however will rather parody the source IP address of the UDP bundles, hindering the aggressor's actual area from being uncovered and possibly immersed with the reaction parcels from the focused on worker.

Because of the focused on worker using assets to check and afterward react to each got UDP bundle, the objective's assets can turn out to be immediately depleted when an enormous surge of UDP parcels are gotten, bringing about forswearing of-administration to ordinary traffic.

How Can You Spot a UDP Flood Attack?

At the point when the specialist gets another UDP bundle, assets are utilized to deal with the solicitation. The primary phase of this cycle incorporates the expert deciding if any exercises are occurring at the assigned port. Tolerating no undertakings at that port and getting gatherings, the specialist sends an ICMP bundle to illuminate the sender that the objective couldn't be reached.

At the point when numerous PCs dispatch UDP flood DDoS attacks, the assault is portrayed as a Distributed Denial of Service (DDoS) danger. At the point when numerous PCs are utilized to supply UDP floods, the total traffic volume may periodically outperform the limit of the link(s) interfacing the objective to the Internet, bringing about a blockage.

UDP is a data transmitting protocol the executives convention that doesn't need an association and doesn't need a gathering. UDP transmission, in contrast to TCP, doesn't need a three-way handshake. Thus, it includes insignificant overhead and is entirely reasonable for correspondences that need not be observed and assessed, like chat or VoIP.

The very properties that make UDP ideal for specific kinds of traffic moreover make it more helpless against misuse. Without a hidden handshake to ensure a legitimate affiliation, UDP channels can be used to send an immense volume of traffic to any host. There are no inside protections that can limit the speed of a UDP flood. In this manner, UDP flood DOS attacks are especially unsafe in light of the fact that they can be executed with a confined proportion of resources.

DDoS Mitigation works by and large by putting a moderation gadget/framework upstream from your web association. You can get a DDoS moderation administration like Prolexic for these administrations, or you can go with a cloud supplier that as of now incorporates DDoS relief from whatever merchant.

It is difficult to moderate DDoS at the actual level from your worker on the grounds that the bundles are likely flooding the following bounce up on the organization, for example your ISPs neighborhood switch. Along these lines, you can be dropping the parcels all you need, they are as yet coming from the ISPs change to your organization and using your transfer speed. Subsequently, to relieve the assault, the parcels should be dropped upstream.

At the most fundamental level, most functioning systems attempt to mitigate UDP flood attacks by slowing down ICMP responses. However, such indiscriminate segregation will have an impact on legitimate traffic.

In general, UDP relief strategies relied on firewalls to sift through or stop malicious UDP packets. However, such tactics are becoming obsolete as contemporary high-volume attacks may easily overwhelm firewalls that are not designed with overprovisioning in mind.

For more modest sites, you can utilize an intermediary administration like CloudFlare - indeed, this is the favored answer for some until they arrive at exceptionally huge size. CloudFlare works by controlling your DNS for the space. It then intermediaries all web traffic through its organization and workers, which are vigorously sustained to withstand DDoS assaults and furthermore to capture other basic hack endeavors like XSS and SQL Injection. Authentic traffic is then sent to your web worker while dubious traffic is dropped upstream, leaving you unaffected by the effects of a possible DDoS.

Overall there are three things you can do to alleviate a surge of parcels.