Privacy settings
We use cookies and similar technologies that are necessary to run the website. Additional cookies are only used with your consent. You can consent to our use of cookies by clicking on Agree. For more information on which data is collected and how it is shared with our partners please read our privacy and cookie policy: Cookie policy, Privacy policy
We use cookies to access, analyse and store information such as the characteristics of your device as well as certain personal data (IP addresses, navigation usage, geolocation data or unique identifiers). The processing of your data serves various purposes: Analytics cookies allow us to analyse our performance to offer you a better online experience and evaluate the efficiency of our campaigns. Personalisation cookies give you access to a customised experience of our website with usage-based offers and support. Finally, Advertising cookies are placed by third-party companies processing your data to create audiences lists to deliver targeted ads on social media and the internet. You may freely give, refuse or withdraw your consent at any time using the link provided at the bottom of each page.
Thank you! Your submission has been received!
Oops! Something went wrong while submitting the form.
Reject All
Cookie SettingsCookie Settings
Accept AllSave Selection
Wallarm
>
Wallarm Learning Center
>
Transmission control protocol - TCP
DevSecOps 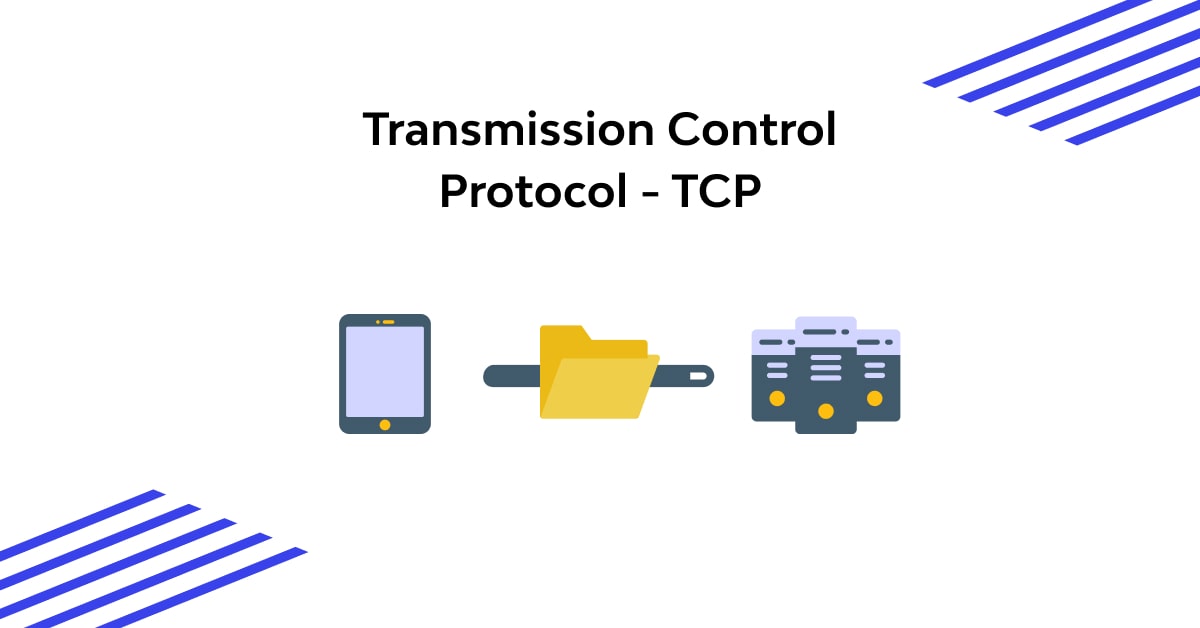 One of the main conventions in the Internet convention suite is TCP (Transmission Control Protocol). Continue reading as we give you the transmission control protocol definition.

One of the main conventions in the Internet convention suite is TCP (Transmission Control Protocol). It's liable for conveying solid administrations and sits between the Application and Network Layers. It's an association situated interchanges convention that makes sending and getting messages over an organization more helpful.

Both the client and the server should partake in a three-manner handshake through the layers of transmission control protocol to lay out a conventional TCP protocol. Coming up next is a breakdown of the method:

TCP works by separating communicated information into fragments, every one of which is bundled into a datagram and shipped off its objective once the association is laid out.

The importance of the TCP

TCP is significant in light of the fact that it indicates the standards and methods for information transmission over the web. It is the groundwork of the cutting-edge web, guaranteeing that information is sent reliably paying little heed to area, equipment, or programming.

TCP is versatile and adaptable, and that implies new conventions can be added to it without making it fall flat. It's additionally nonproprietary, meaning it has a place with no one individual or association.

Every information parcel is enclosed by a header by TCP, which comprises of ten obligatory fields adding up to 20 bytes (or octets). Every header contains data about the association along with the information that is at present being sent.

Coming up next are the ten TCP header fields:

Pros and cons of the protocol

What is transmission control protocol used for?

TCP is an information association convention that permits information to be safely sent between the server and the client. It guarantees the respectability of information sent over the organization, no matter what its volume. Thus, sending information from more elevated level conventions that demand getting all data is utilized.

The TCP/IP stack is a model that portrays how the TCP/IP model puts together and trades information over networks. It shows a progression of layers that address how information is taken care of and bundled by a bunch of conventions as it goes from client to server and back.

TCP coincides with different conventions in the vehicle layer, like UDP. With the exception of UDP, which has restricted blunder checking ability, conventions in this layer guarantee mistake free information transmission to the source.

The TCP/IP stack, similar to the OSI model, is a theoretical model for information trade norms. Each layer repackages information as indicated by its usefulness and transport conventions.

Demands advance down the stack to the server as information, beginning at the application layer. At each layer, the data is separated into bundles of different sorts. The data is moved in the accompanying ways:

During the underlying phase of a three-way handshake TCP, SYN floods happen when an objective machine sends TCP association demands (SYN parcels) to each port quicker than it can handle them. The server becomes lethargic to authentic TCP demands while endeavoring to handle the aggressor's phony SYN demands, keeping the handshake from being finished.

Subsequently, the designated machine's accessible TCP ports are drained. SYN parcels are much of the time utilized as the default payload to just soak an objective's organization pipe.

This is a message-based convention that empowers TCP-based correspondence among applications and message intermediaries. The culprits of a STOMP DDoS assault utilize a botnet to open countless TCP handshakes with applications. The assailants then, at that point, flood the organization with garbage information masked as STOMP TCP demands. The assault can likewise debilitate server assets on the off chance that the server is ready to parse STOMP demands.

After a three-way handshake has been finished and information has been communicated, a tear assault is a sort of IP discontinuity assault that objectives the TCP/IP reassembly component. It involves an aggressor sending information bundles with wrong section offset fields, keeping the collector from accurately assembling the divided information. Information parcels impact and overpower the casualty's servers rapidly.

TCP's mistake identification process, which includes retransmitting and reordering parcels after they show up, can cause idleness in a TCP stream. Since it lessens dormancy and jitter by not reordering parcels or retransmitting missing information, profoundly time-touchy applications like voice over IP (VoIP), web-based video, and gaming ordinarily utilize a vehicle cycle like User Datagram Protocol (UDP).

Since it has absolutely no chance of recognizing whether the two applications have finished their volatile correspondence, UDP is named a datagram convention, or connectionless convention. Rather than rectifying invalid information parcels as TCP does, UDP disposes of them and passes on more definite blunder recognition to the application layer.

Another factor in the TCP vs UDP is that a UDP datagram's header contains definitely less information than a TCP section header. To diminish inertness, the UDP header goes through undeniably less handling at the vehicle layer.

The difference between TCP/IP and the OSI Model

The degree of particularity is the fundamental contrast between the TCP/IP and OSI models.

One can consider the OSI model as a better hypothetical depiction of how data is exchanged that isn't joined to a particular show. It's a design for frameworks organization systems generally speaking. The TCP/IP stack is more unambiguous, and it integrates the most commonly used data move shows.

While the TCP/IP stack is concrete and revolved around shows, the OSI model is hypothetical and bases on handiness. Another difference is that TCP/IP has four layers while the OSI has seven.