Privacy settings
We use cookies and similar technologies that are necessary to run the website. Additional cookies are only used with your consent. You can consent to our use of cookies by clicking on Agree. For more information on which data is collected and how it is shared with our partners please read our privacy and cookie policy: Cookie policy, Privacy policy
We use cookies to access, analyse and store information such as the characteristics of your device as well as certain personal data (IP addresses, navigation usage, geolocation data or unique identifiers). The processing of your data serves various purposes: Analytics cookies allow us to analyse our performance to offer you a better online experience and evaluate the efficiency of our campaigns. Personalisation cookies give you access to a customised experience of our website with usage-based offers and support. Finally, Advertising cookies are placed by third-party companies processing your data to create audiences lists to deliver targeted ads on social media and the internet. You may freely give, refuse or withdraw your consent at any time using the link provided at the bottom of each page.
Thank you! Your submission has been received!
Oops! Something went wrong while submitting the form.
Reject All
Cookie SettingsCookie Settings
Accept AllSave Selection
Wallarm
>
Wallarm Learning Center
>
"Sybil Attacks" in the Blockchain - What They Are and How to Protect Your Tokens?
Attacks

"Sybil Attacks" in the Blockchain - What They Are and How to Protect Your Tokens? 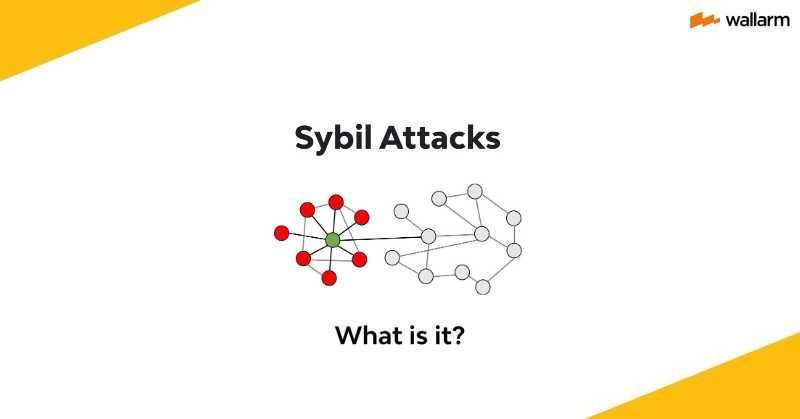 Anyone who has been around the cryptocurrency space for a while is probably familiar with the term “Sybil Attack.” It is an attack on the network in which a malicious entity creates many duplicate accounts to pose as real users. The goal of this type of attack is to take advantage of other users by impersonating them and using their account credentials to send or receive digital assets. Therefore, it is important that anyone who stores their crypto off of an exchange and instead keep it in a wallet or hardware vault take precautions to protect against such attacks.

In this article, we will explore what the Sybil Attacks are, how they work and some common ways in which you can protect your tokens from them.

What Is a Sybil Attack?

A Sybil attack is when a malicious entity creates many duplicate accounts to pose as real users. This makes it difficult for the system to determine the actual number of users in the network.

This type of attack can be perpetrated by anyone, but usually occurs when someone wants to send a transaction, but they would like to make sure their transaction is conducted on their own behalf and not on behalf of some impersonator. To do this, they create many accounts and use them simultaneously to conduct transactions.

The goal of this type of attack is to take advantage of other users by impersonating them and using their account credentials for digital assets. For example, someone could create an account with a high reputation score so that it looks like that person has more money or followers than they actually have.

How does Sybil Attacks Work?

In order to launch a Sybil attack, the perpetrator of the attack needs to create many accounts on the network that they will use to impersonate legitimate users. They then need to gain access to an account that is already on the network and impersonate that user. This is done by compromising their email address or password.

If you own cryptocurrencies, it is important that you use a secure password management system like LastPass or KeePass in order to make sure your passwords are not easily compromised. Not only can this provide a layer of protection against malicious actors attempting to take advantage of your account, but it can also protect against unintentional phishing attacks.

Another common precaution that people take against Sybil attacks is using two-factor authentication (2FA) with an authenticator app like Google Authenticator or Authy. This device acts as your second factor for logging into your account and prevents attackers from gaining access by hijacking your phone number or email address if they have stolen your password or 2FA code.

Ways to Protect Your Tokens From Sybil Attacks

There are many ways in which you can protect your tokens from Sybil Attacks. Some common methods are:

Avoiding a sybil attack is not always easy and it's important to have an understanding of what they are, how to protect your tokens, and the factors that contribute to a successful or unsuccessful sybil attack.

The blockchain is a distributed ledger that stores data in a secure and decentralized manner. In reality, the blockchain is just a database that allows for people to trade tokens without a third-party intermediary.