Privacy settings
We use cookies and similar technologies that are necessary to run the website. Additional cookies are only used with your consent. You can consent to our use of cookies by clicking on Agree. For more information on which data is collected and how it is shared with our partners please read our privacy and cookie policy: Cookie policy, Privacy policy
We use cookies to access, analyse and store information such as the characteristics of your device as well as certain personal data (IP addresses, navigation usage, geolocation data or unique identifiers). The processing of your data serves various purposes: Analytics cookies allow us to analyse our performance to offer you a better online experience and evaluate the efficiency of our campaigns. Personalisation cookies give you access to a customised experience of our website with usage-based offers and support. Finally, Advertising cookies are placed by third-party companies processing your data to create audiences lists to deliver targeted ads on social media and the internet. You may freely give, refuse or withdraw your consent at any time using the link provided at the bottom of each page.
Thank you! Your submission has been received!
Oops! Something went wrong while submitting the form.
Reject All
Cookie SettingsCookie Settings
Accept AllSave Selection
Wallarm
>
Wallarm Learning Center
>
Smurf DDoS attack
Attacks 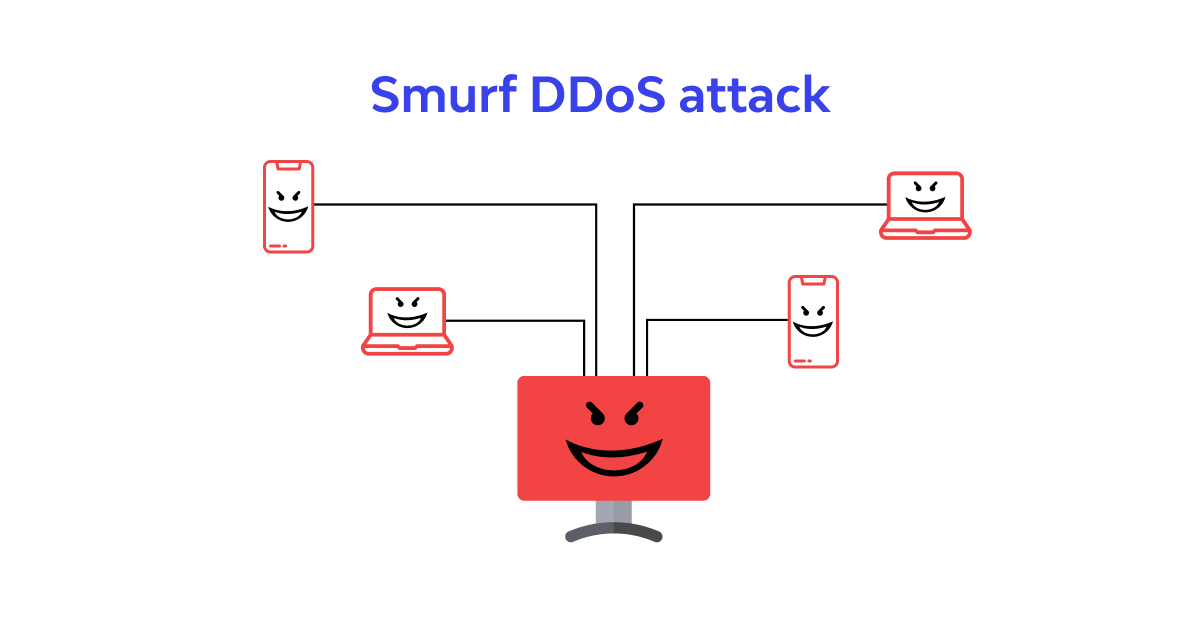 Attacks geared at denying users access to servers are executed in different ways.  One notable approach – similar in many forms of service denials – is the use of volume.  The sheer volume of requests is employed by attackers to render a particular network useless. A good representation of that is the subject of discourse in this context.

These are attacks that overload a server with Ping requests. It leverages the volume limit of servers and the features of broadcast networks.  It uses these two means to amplify the extent of the normal damage. They get their name from a malicious program named DDoS SMURF.

It looks very close to ping attacks considering the manner of execution. However, there is a difference in the target feature that is exploited. Generally, the attacker sends a ping (ICMP echo) and rides on the automated server-host response. This is done at a bandwidth larger than the predetermined coverage of the targeted server.

To be able to further grasp the technical part of SMURF attacks, here is a breakdown of how it works:

They are classified based on how sophisticated their execution is. Considering this, two types exist; the basic and the advanced attacks.

The Basic Attack – In this type, the assaulted network discovers itself among many ping packet requests. The packet used in this attack has a fake source that is linked to the broadcast framework of that potential victim. The echo that would be potentially generated from the answers of the devices on the radar of broadcast automatically renders the victim network non-functional. All these are subject to the correct dispersion of the broadcast. In the event where the packets are not properly dispersed, the attack would not function

The Advanced Smurf Attack – In this type, there is there are victims that suffer collateral damage from the attack. These victims are termed third-party victims. This approach works by making a third-party victim a source of the game plan. This allows attackers to be able to work without interruption due to the stability of the route through to the internet. The goal is to access certain systems linked to their initial target. That way, they do not just tamper with the functionality of the target alone, they also get to tamper with a larger subsection of the internet.

How to Mitigate Smurf DDoS Attack?

Surprisingly for those interested in how to stop Smurf attacks, it does not require any complicated or flashy move. It works by a combined function of filtering between pings (ICMP packet requests) and an over-provisioning method. The combination of this allows administrators to identify possible requests from spoofed sources and erase them without interfering with the normal functions of the server in question.

In the case of an attack, here are the damage control protocols you could use:

Overall standard network security protocols may or may not be effective against these attacks. However, as an administrator, it is important that you put the necessary oversight mechanism to prevent such occurrence.

Read our article "How to Stop a DDoS Attack"