Privacy settings
We use cookies and similar technologies that are necessary to run the website. Additional cookies are only used with your consent. You can consent to our use of cookies by clicking on Agree. For more information on which data is collected and how it is shared with our partners please read our privacy and cookie policy: Cookie policy, Privacy policy
We use cookies to access, analyse and store information such as the characteristics of your device as well as certain personal data (IP addresses, navigation usage, geolocation data or unique identifiers). The processing of your data serves various purposes: Analytics cookies allow us to analyse our performance to offer you a better online experience and evaluate the efficiency of our campaigns. Personalisation cookies give you access to a customised experience of our website with usage-based offers and support. Finally, Advertising cookies are placed by third-party companies processing your data to create audiences lists to deliver targeted ads on social media and the internet. You may freely give, refuse or withdraw your consent at any time using the link provided at the bottom of each page.
Thank you! Your submission has been received!
Oops! Something went wrong while submitting the form.
Reject All
Cookie SettingsCookie Settings
Accept AllSave Selection
Wallarm
>
Wallarm Learning Center
>
POODLE Attack
Attacks 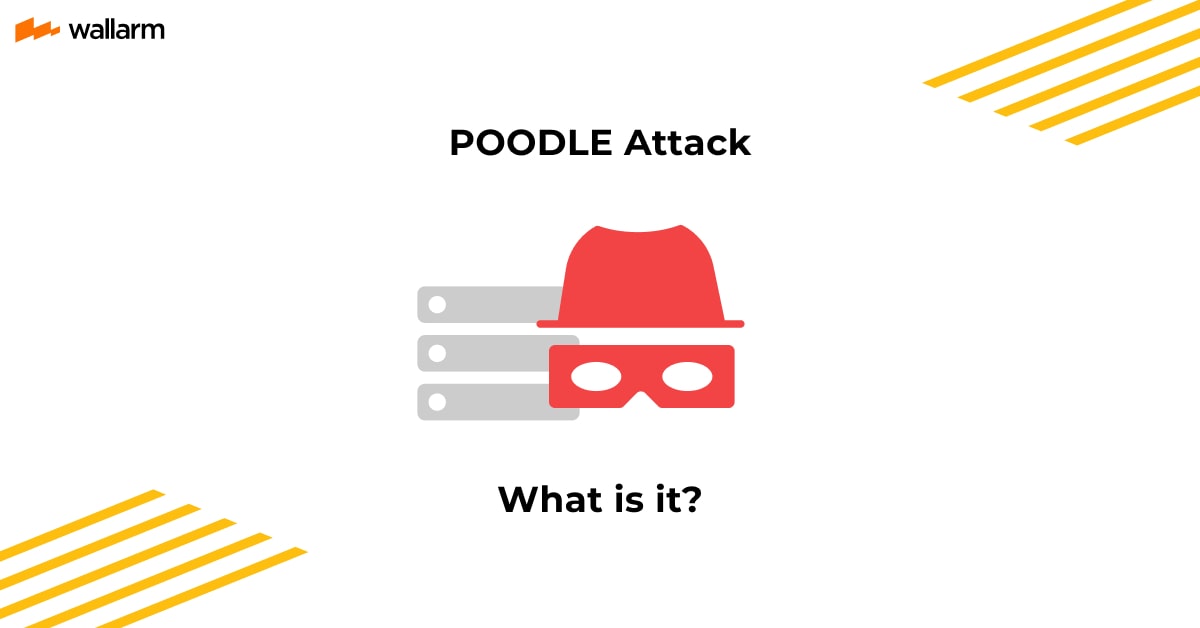 The SSL 3.0 protocol is defenseless against the POODLE attack (Padding Oracle on Downgraded Legacy Encryption) (CVE-2014-3566). This blemish empowers an assailant to catch SSLv3-scrambled traffic. The Transport Layer Security convention (TLS), the trade for SSL, no longer has the imperfection (Secure Socket Layer).

What Is the POODLE Attack?

An exploit called the CVE-2014-3566, or poodle attack CVE, is utilized to take information from secure associations, including cookies, passwords, and some other sort of program information encoded because of the protected attachments layer (SSL) convention.

The United States Computer Emergency Readiness Team (US-CERT) distributed a warning in October 2014 concerning an imperfection in the encryption used to get web traffic. As a result, network traffic between a client and a server can be decoded by aggressors utilizing the security issue known as POODLE (Padding Oracle On Downgraded Legacy Encryption).

POODLE attack TLS can be utilized compromise forms of the Transport Layer Security (TLS) protocol, SSL 3.0 and SSL 2.0, which encode and verify information moved over the web. A couple of programs support SSL, notwithstanding how the business has supplanted these conventions with the fresher and safer TLS associations. A POODLE attack SSL occurs at the point when TLS is not free, an aggressor attempting to utilize POODLE can urge specific programs to change to SSL 3.0 by disrupting the correspondents' association.

How do POODLE attacks work?

A man-in-the-middle (MiTM) assailant can tune in on correspondences that are expected to be protected thanks to the POODLE security shortcoming. The client would then completely go over the weak web application. This suggests that assailants can utilize POODLE to take clients' confidential data and — possibly — mock the client.

The accompanying three phases should be finished effectively for a POODLE attack to be powerful:

What Is Padding and Padding Oracle?

The padding method used by the majority of web servers is:

Coming up next is what the aggressor performs to do a standard attack POODLE and take a web meeting cookie:

Is your web server vulnerable to POODLE - How do I know?

It ought to be noted that POODLE influences web servers and programs and is an organization's weakness.

Even though there is practically no probability of savage driving SSL v3.0 encryption, the POODLE attack permits every byte of a scrambled message to be recuperated without decoding after a restriction of 256 attempts. This means something like 4096 endeavors, or a couple of moments, for a 16-byte meeting cookie, which is a very sizable chance to send off useful assaults. Something critical should have been finished.

The CVE-ID CVE-2014-3566 for the POODLE weakness was apportioned upon divulgence on October fourteenth, 2014. Albeit crippling the obsolete SSL v3.0 convention in web-based programs and servers was the conspicuous choice, this would have broken numerous sites and more seasoned frameworks in 2014. One arrangement (recently used to balance the BEAST assault) was just to eliminate support for the weak codes and change to those presented by SSL v3.0 since the assault just influences block figures in CBC mode. The RC4 stream figure was everything that was left, which was appalling since it had proactively been demonstrated to be powerless.

The TLS FALLBACK SCSV figure suite choice was recommended as an impermanent fix by the POODLE scientists to permit backup usefulness while forestalling constrained downsizing to a less safe SSL/TLS convention. This halted attacks on conventional downsizing while proceeding to help old servers and programs. Merchants and site proprietors acted quickly to execute TLS FALLBACK SCSV and suspend support for SSL v3.0 at the present time or before long. RFC 7568 officially belittled SSL v3.0 in June of that year.

SSL v3.0 was utilized in heritage frameworks, especially inward applications that kept on utilizing obsolete variants of Internet Explorer, despite convincing proof that it was uncertain. Moving up to a safer convention was frequently not worth breaking heritage support since. At the same time, a dependable danger, the POODLE attack, must be sent off in a man-in-the-middle situation. As indicated by the late review, up to 4% of public web servers will, in any case, uphold SSL v3.0 starting around 2020.