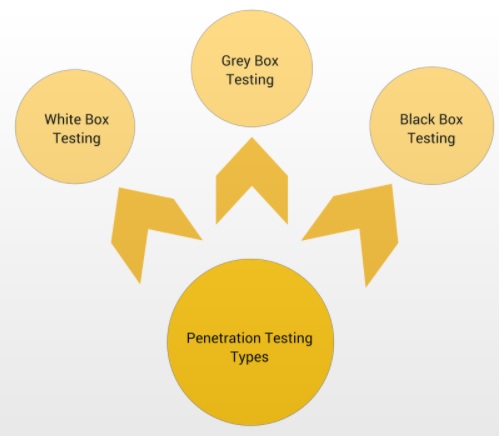 There is the old saying that prevention is better than cure. This applies to every aspect of life, both human and technological. Penetration Testing (or Pentest) is a preventive solution to technology's greatest foe – cyber-attacks. But unlike other security protocols, pentest combats the threat by thinking and acting as a threat itself.

It is a simulation of a real-life cyber-attack aimed at fishing out vulnerabilities, weaknesses, and other possible targets through which hackers gain access to the system. The test results are then used to remedy the flaws in the website network or application system, by fine-tuning, and strengthening the security protocols in place.

One size doesn't fit all with Penetration Testing, which is why three different types exist – White Box, Gray Box, and Black Box.

When testing for system vulnerabilities, the amount of information the pentester has at their disposal plays a crucial role in the achievable level of access. This is identical to the way hackers can cause damage depending on how much information they have on the system.

The pentester has full access to the website network information in a white box testing situation. This method allows a comprehensive analysis of both internal and external vulnerabilities from basic URL to network maps, source code, and other credentials.

A real-life scenario of this kind of threat could be in the case of an employee gone rogue or an external party with stolen employee credentials.

The pentester will usually work in connection with technical and security teams to sift through the large number of data and detect as many weaknesses as possible. This procedure is most beneficial for in-depth calculation testing, especially on websites that hold customer financial and personal data.

Here, the pentester has access to some amount of information on the organization. This could be likened to a site user who has a substantial amount of info on the business or a hacker who's gained access to a user account.

An internal account provides elevated knowledge of the site and access to design and architecture documentation. For this reason, it is the most common root source of cyber threats. Grey box testing is very beneficial precisely for this reason since the pentest is able to focus efforts on the greatest and most realistic risks.

Still, the level of access is limited compared to white box testing, so there is always the slight possibility that a hacker discovers a new exploitable loophole. Nonetheless, it is the go-to for most commercial businesses and sites with a member area.

This is the stark opposite of white box, not just in color shade but in access level. The black box tester has practically no information on the site.

It's like a hacker stumbling in on a website for the first time and trying to gain unauthorized access as an outside attacker. The hacker only has the public information to go by, and so does the pentester in a black box simulation. The main objective here is to check how a system can be exploited from outside the network.

This method is rather time-consuming because the pentester needs to devise their own target network map since such information isn't available.

Penetration Testing isn't always an optional procedure for businesses. With the rising incidences of cybercrime in recent years, it has become one of the stringent compliance requirements for security auditing procedures.

Organizations in various industries are obligated to carry out and report on their system pentest assessments. A major focus is on areas such as the payment card service industry, financial institutions, tech industries, and the medical sector.

Branded card companies like Mastercard, Visa, and American Express have a nearly worldwide user-base. Large amounts of customer personal data and billions of funds are stored on these networks. Hence it is paramount to secure debit and credit cards against cyber theft and frauds.

This security standard, which was formed in 2004, requires vulnerability scans and penetration tests to be carried out quarterly, or on a biannual basis at the least. It is also recommended to do so after any system changes.

The American Institute of CPA's (AICPA) developed the SOC 2 to ensure that digital service providers can securely manage client data and protect the interest of partner businesses and organizations.

A SOC 2 certification is essential when considering a SaaS provider, for instance. It is also a requirement for any tech-based service, and an external audit must be carried to obtain the certificate.

Fortunately, the flexibility of this security standard allows different businesses to personalize the controls according to specific needs.

US healthcare institutions are subject to HIPAA compliance laws. Doctors are bound to maintain the privacy of their patient's medical records, and healthcare organizations as a whole are also obligated to protect medical data.

Since the bulk of such information is stored on hospital servers nowadays, healthcare providers must carry out several security protocols, including penetration testing. The standard requires technical and non-technical security evaluations whenever they are appropriate.

There are legal implications for negligence, which is a fine between $100 and $50,000 for each record compromised in the event of a hack.

The securities and exchange sector is another area with a continuous need for data protection techniques and security protocols. Establishing the cybersecurity rules for these organizations is FINRA. According to FINRA, financial entities need to carry out a strong pentest program through accredited third party agencies.

Through FINRA compliance standards, securities firms can meet the requirements of the Securities Exchange Act of 1933.

When Your Company Needs A Pentest?

It is important to do a pentest before putting going live with any network or application system, not before and not after.

During deployment, the system is still undergoing constant changes. At this point, it may be too early to carry out penetration testing because more security holes may pop up as changes occur in the network.

On the other hand, putting the network into production without a prior pentest would be risky. You'll be leaving the door wide open for hackers to swarm in even before you're able to reach that expected ROI (Return on Investment).

Other times when penetration testing is required includes:

Meeting up with the compliance requirements of security standards is one of the most common reasons to do a pentest. FINRA and HIPAA, for instance, are legally binding, so financial and healthcare organizations are obligated by law to perform periodical penetration tests.

The repercussions of non-compliance are not light, so organizations tend to oblige. These regulations also indicate how often the pentest should be carried out.

In the event of a cyber-attack, the affected company will be forced to carry out a pentest. The process will assist in detecting the source of the breach in order to eliminate it and patch up the vulnerabilities.

Using a pentest as a cure is effective in eliminating the problem. However, businesses often take a heavy economical blow after a cyber-attack. The damage to the brand name is even worse because it takes a while to rebuild broken trust. It is advisable to avoid getting to this point.

Conducting a pentest is a bit heavy on the pocket, and when on a smaller budget, it may be difficult to carry it out. A few alternatives exist for companies unable to do a full-on pentest.

A bug bounty is a security test spearheaded by the company and carried out by ethical hackers to prevent cyber-attacks. Hackers who discover relevant vulnerabilities are rewarded.

Unlike the full-scale pentest, where there's a fixed price for a range of security audits, organizations carrying out a bug bounty program set the amount for compensation. The company only pays for inherent weaknesses that are discovered. Also, vulnerabilities can be tested individually over time.

However, with the bug bounty, only black box testing is applicable since the ethical hackers will only have access to public website information.

A vulnerability scan is a security testing tool that scans the network to detect critical weaknesses. It searches for loopholes where hackers could gain access to the site and reports on those areas.

This is similar to what a pentest does. However, while vulnerability scanning tools will only deliver a routine report on potential weak points in the system, a full penetration testing will go further and exploit those vulnerabilities to see if that loophole could become a high impact risk or just a simple informational issue.

So the vulnerability scan is a smaller part of penetration testing.

With source code analysis tools, you can examine the system source code to fish out errors that went undetected during the application development phase. The source code review takes a microscopic view of the code, scanning every single line and finally reporting on possible vulnerabilities.

Once again, this analysis is often a precursor to a full-on pentest, where the pentester subsequently digs deeper into the detected vulnerabilities.

Penetration testing is an in-depth security protocol that requires expert testers to scale the security walls like a hacker would, through planning and reconnaissance, scanning, gaining access, maintaining access, and analyzing results.

The objective is to successfully configure the web application's firewall (WAF) to withstand any threats through the detected loopholes. How often you need to carry out a pentest depends on factors such as the size of the business, budget, and strictness of compliance laws. Regular pentest procedures will certainly help you stay on top of your cybersecurity perimeter.