Privacy settings
We use cookies and similar technologies that are necessary to run the website. Additional cookies are only used with your consent. You can consent to our use of cookies by clicking on Agree. For more information on which data is collected and how it is shared with our partners please read our privacy and cookie policy: Cookie policy, Privacy policy
We use cookies to access, analyse and store information such as the characteristics of your device as well as certain personal data (IP addresses, navigation usage, geolocation data or unique identifiers). The processing of your data serves various purposes: Analytics cookies allow us to analyse our performance to offer you a better online experience and evaluate the efficiency of our campaigns. Personalisation cookies give you access to a customised experience of our website with usage-based offers and support. Finally, Advertising cookies are placed by third-party companies processing your data to create audiences lists to deliver targeted ads on social media and the internet. You may freely give, refuse or withdraw your consent at any time using the link provided at the bottom of each page.
Thank you! Your submission has been received!
Oops! Something went wrong while submitting the form.
Reject All
Cookie SettingsCookie Settings
Accept AllSave Selection
Wallarm
>
Wallarm Learning Center
>
Explanation of the 7 Layers of OSI model
DevSecOps

Explanation of the 7 Layers of OSI model 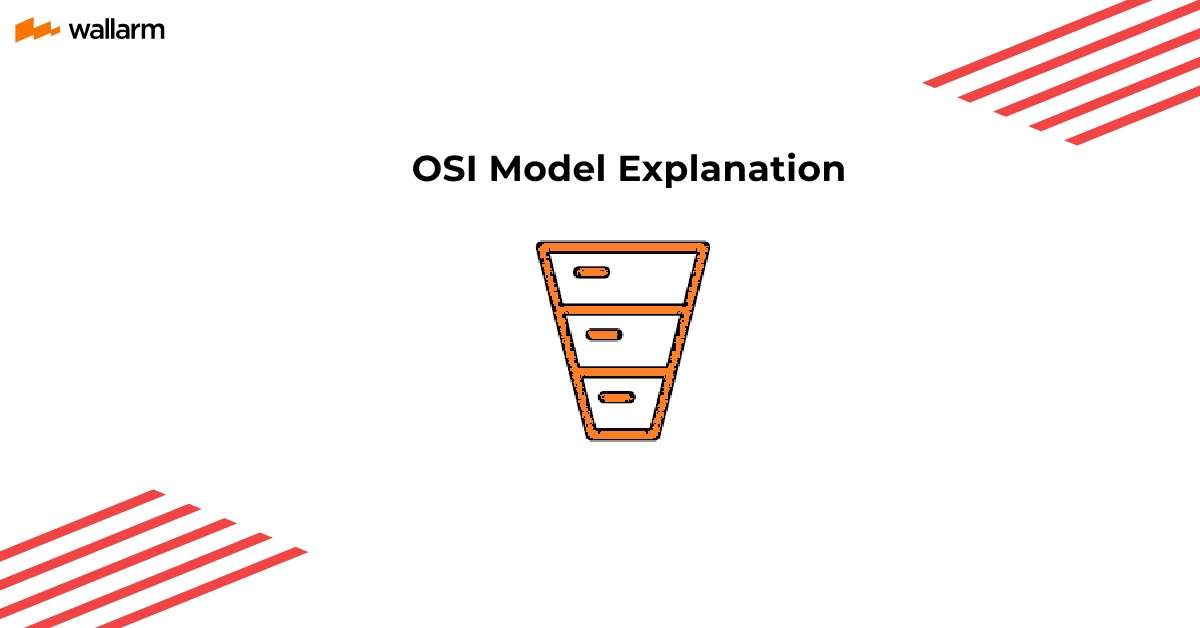 As an IT master, chances are you probably go over the articulation Please Do Not Throw Sausage Pizza Away while finding out about programs, network plan, and execution issues.

Isn't there something to be said about the phrase "Please Do Not Touch Steve's Pet Alligator"?

If you accept that these ring a bell, you're advancing pleasantly: These are useful memory aids associated with the OSI model's seven tiers. The crucial letter of each phrase assists in comprehending the OSI model's layer architecture and identifying the real layer.

However, before we dive into the subtleties, we should start for specific essentials about precisely what the OSI network model is.

What is the OSI Model?

The OSI model can assist you with seeing how information streams across and inside networks. After the consolidation of two models from the 1970s, it was received as a general norm in 1984.

For IT experts then, at that point and now, the OSI model procedures focused in on looking at improved: rather than squandering hours deciphering issues, they can pinpoint issues related with unequivocal layers.

For network device traders, application fashioners, and connection plans, the model strategies abstracting away eccentricism from contraption to-device correspondence, by focusing in on dealing with each issue thus. Besides, the model was made to give standardized sorting everything out shows to avoid the use of contraptions that need customer and application-honesty.

Throughout the entire existence of the OSI model, the following significant achievements have happened:

7 layers of the OSI model

The Application Layers give the going with purposes:

This software gives you access to important instructional file sources as well as information about numerous publications and organizations.

The discussion between PCs is overseen by this layer. It assists you with starting and finish the association between the space and the distant application.

This layer is liable for making a solid working relationship with the end client reliant upon their essentials. This layer handles all fundamental sign-on or secret key supporting. One of the affiliations offered by the social occasion layer is exchange discipline, which might be half-duplex or -duplex. It's an ordinary occasion in programs with a high number of technique calls.

The affiliation layer is made by the layer responsible for transport, which licenses information to be bestowed from an interest on a source PC to a cycle on an objective machine. It is coordinated through a solitary a few affiliations, and it thinks about authoritative hindrances.

It picks how much information ought to be sent where and at what rate. This layer develops the message which are gotten from the application layer. It guarantees that information units are passed on screw up free and in arrangement.

Through stream the board, wreck control, and division or desegmentation, the vehicle layer helps you with remaining mindful of the consistency of an affiliation.

On the off chance that no stumbles happen, the vehicle layer other than gives an insistence of the convincing information development and passes on the associated information. TCP is the most striking vehicle layer portrayal.

Starting with one affiliation and moving to the next, this layer is in responsibility of information transmission planning and administration. It picks the most restricted possible way beginning with one host then onto the following on different associations.

At the point when the package is gotten from the DLL, the organization layer recognizes whether the group is destined for the area have (in which case it's sent up to a higher layer), is headed for a substitute host on the close by association (wherein case is sent down to a lower layer), or is destined for a substitute association all around, and for the present circumstance it does the indispensable coordinating to the area contained in the packaging.

In the standard TCP/IP model, this is done by executing reasonable IP tending to and using switches for correspondence. Data going out are disengaged into bundles which are then reassembled at the not exactly alluring end.

Errors in the real layer are corrected by the data link layer. You may use this layer to figure out how a connection between two network devices is formed and ended.

It's anything but an IP address sensible layer that guides in the recognizable proof of any endpoint by permitting you to portray predictable tending to. The layer further guides you in directing bundle controlling inside an association. It helps you in deciding the ideal strategy for getting data from the source to the objective.

The information interface layer is partitioned into two sorts of sublayers:

The actual layer, being the first layer in the OSI architecture, is responsible for establishing a physical cable or remote connection linking network hubs (gadgets). It characterizes the media, association, and sign sort (regardless of whether simple or advanced) to be utilized, and communicates that crude information as signs. All frameworks organization devices and specifics, similar to radio frequencies and hardware, are described at this layer. Occasions of parts at the real layer consolidate radio wires, network interface cards (NIC), cabling, connectors, and pins.

The fundamental services of this layer are:

The quantity of pieces each second and spot synchronization are characterized.

How the devices are planned inside the association, whether or not transport, star, ring, organization, etc.

Determinations that control data stream according to simplex, half-duplex, and full-duplex mode. Most, if not all, progressed wired associations use full-duplex transmission modes.

Sort of connector, pin strategy, interface card, and so on.

Pros and cons of OSI model

Why use the OSI model?

The OSI model aides clients and administrators of PC organizations:

With the OSI network model considered by some as obsolete and unreasonable, the inquiry that springs up is ordinarily: Why use it? Security and organization improvement are the primary reasons why keen IT specialists actually draw out the OSI model to investigate and impart complex organization challenges with each other:

The OSI model permits IT experts to coherently separate complex organization challenges into reasonable errands, in this manner giving designated spots along the investigating venture. In the event that a client is having network execution issues, you can check the nature of the association at Layer 1, Layer 2, Layer 3, and so forth to limit the exhibition issue.

While most of IT experts know about the TCP/IP web model, there are other correspondence networks in nature. Having the OSI model permits IT experts to speak with each other conflicting and effectively unmistakable terms to decrease miscommunications.

Notwithstanding the unpreventable data on the OSI network model, it's typical diverged from the 4-layer TCP/IP model. As an IT capable, it's huge that you appreciate the qualifications and similarities between these two models. Taking everything into account, they're not in challenge yet rather are associated.

Notwithstanding not getting on for the most part, the OSI model is at this point used today when insinuating organize plan, and still appears as an expected request on accreditation tests (and maybe your next imminent representative gathering?).

So make sure to remember Please Do Not Throw Sausage Pizza Away, so you can have a run of the mill frameworks organization language to attract with clients, dealers, and other association administrators.