Privacy settings
We use cookies and similar technologies that are necessary to run the website. Additional cookies are only used with your consent. You can consent to our use of cookies by clicking on Agree. For more information on which data is collected and how it is shared with our partners please read our privacy and cookie policy: Cookie policy, Privacy policy
We use cookies to access, analyse and store information such as the characteristics of your device as well as certain personal data (IP addresses, navigation usage, geolocation data or unique identifiers). The processing of your data serves various purposes: Analytics cookies allow us to analyse our performance to offer you a better online experience and evaluate the efficiency of our campaigns. Personalisation cookies give you access to a customised experience of our website with usage-based offers and support. Finally, Advertising cookies are placed by third-party companies processing your data to create audiences lists to deliver targeted ads on social media and the internet. You may freely give, refuse or withdraw your consent at any time using the link provided at the bottom of each page.
Thank you! Your submission has been received!
Oops! Something went wrong while submitting the form.
Reject All
Cookie SettingsCookie Settings
Accept AllSave Selection
Wallarm
>
Wallarm Learning Center
>
Layer 7 DDoS Attacks
Attacks 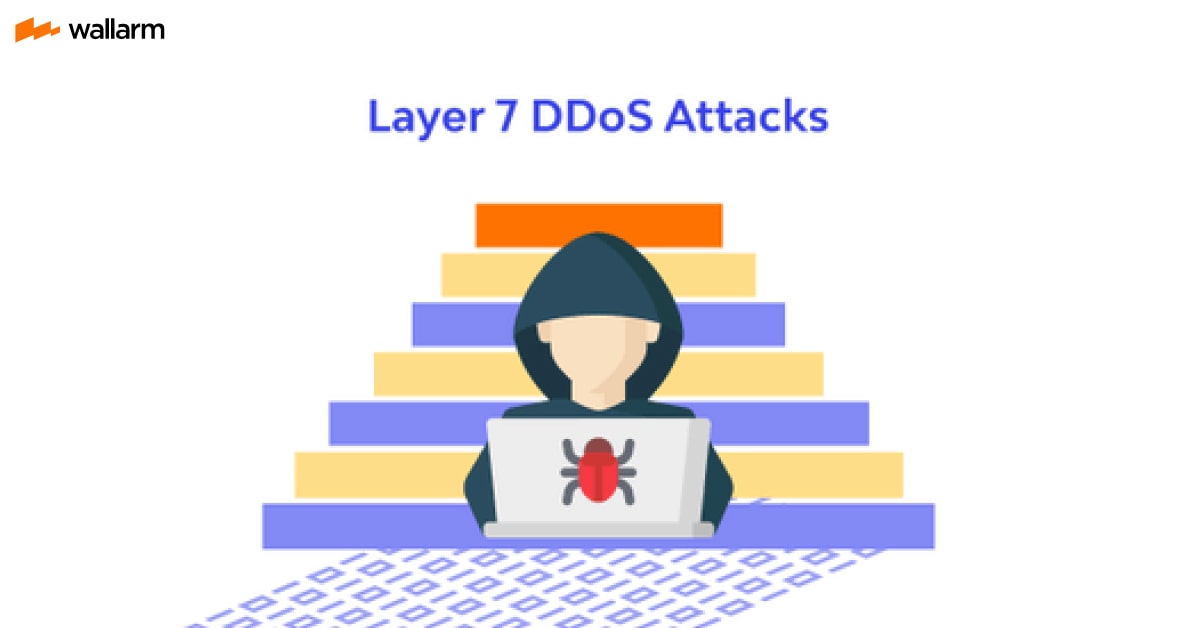 The web has been the greatest type of development in the 21st century. It has uncovered the whole world to more current prospects and more effective methods of living. Today, we have various sites, online stores, online papers, etc. Essentially everything is online nowadays. Be that as it may, the approach of the web additionally prompted the production of more dangers. Indeed, dangers are currently further developed than at any other time. They apply top to bottom mechanical practices to infiltrate through the web foundation that has been set up around the world. A genuine illustration of them is a DDoS assault layer.

What is a Layer 7 DDoS Attack?

Layer 7 DDoS Attacks, otherwise called l7 DDoS assaults, is a term that depicts a vindictive assault that is intended to invade the top layer in an OSI model construction where web solicitation, for example, HTTP GET and HTTP POST happen. These layer 7 assaults, not at all like DNS intensification assaults, are compelling a direct result of the server and organization assets they devour.

How do layer assaults work?

The viability that is accomplished by most DDoS attack layers is because of the number of assets that are needed to dispatch the assault as opposed to the number of assets it takes to address one. While the situation stays as before with layer 7 assaults, the effectiveness of the objective server and the organization can run on a lesser transmission capacity to accomplish a similar noxious impact. This implies that an application layer assault causes more harm while utilizing lesser transmission capacity than different assaults. Presently, this is a reason for stress for most security conventions.

To additionally comprehend this idea, how about we investigate the distinction between the number of assets burned through when a customer is making a requirement and when the server is reacting to the solicitation made. When a client sends a solicitation to sign into their internet-based record, for example, an individual Gmail account, the quantity of assets that his/her PC should utilize is just a little sum. When contrasted and the quantity of assets needed in really looking at the client's qualifications, stacking the client information from a preset data set, and sending a reaction back containing the client's page, the thing that matters is very clear.

In any event, when it's not the situation of login, there are commonly when a customer needs to make information base inquiries or gets a call from one more API to deliver the site page. At the point when this distinction is made bigger because of numerous gadgets focusing on a solitary site, for example, during a botnet assault, the impact can cut down the assistance and lead to a disavowal of administration for the individuals who are genuinely attempting to utilize the serving. Often, assaulting an API with an l7 assault will take it offline.

To successfully forestall an l7 DDoS attack, it's significant that the business completely comprehends the threat that they face. At the point when they are completely mindful of what is in question, they can act in understanding to ensure themselves and find an l7 DDoS protection.

Layer 7 DDoS assaults are just a kind of DDoS assaults and they are frequently completed quickly and quietly. This sort of assault is designated at proviso or business rationale imperfections in the application later. At the point when these provisos are distinguished, the assault begins. These assaults are unique from others since they don't need numerous gadgets, bundles, or enormous data transmission.

The most widely recognized DDoS assault layer incorporates the accompanying:

As the name proposes, these assaults are fundamental HTTP flooding assaults. Here, the assailants utilize comparative IP locations and assets in a similar reach (somewhat more modest than volumetric assaults) to enter into a page or online asset over and over. Customarily, the server would not be able to deal with the unexpected surge of solicitations and would wind up slamming.

This kind of use layer assault is not quite the same as the first. Here, assailants utilize a wide scope of IP locations and assets to perform more development assaults on a site. They might utilize the utilization of botnets to control an assortment of gadgets that have been recently tainted with malware to consistently send GET/POST solicitations to the server. This would go on till the site crashes.

This can be viewed as a subclass of randomized HTTP assaults. Here, the aggressors utilize an assortment of methodologies to sidestep a web application's reserve frameworks. They likewise power the servers to go through a ton of data transmission in finishing individual solicitations. A genuine model would be an aggressor looking for un-stored content or conventional word reference look-through that squanders the server's assets and causes personal times. Reserve sidestep flooding is alluded to as the most intelligent layer 7 DDoS assaults.

In this type of assault, the attacker exploits WordPress pinbacks of a few other comparative establishments before setting up the assault. Randomized HTTP Floods and Cache-sidestep floods are the most widely recognized layer 7 DDoS assaults.

These are the simplest, generally normal, and generally harming of all the application-layer assaults. This assault is so perilous regardless of being so basic. Things being what they are, how can it work? Slowloris assaults work in the converse way of volumetric assaults. Rather than assaulting the server with ceaseless solicitations, the aggressor decides to send payloads gradually (the explanation for the name) while keeping up with the association for a significant stretch. By dispatching this kind of assault, you will in any case debilitate the server's assets after some time. The server's assets can be squanderer in attempting to deal with a full solicitation from slow loris payloads. This would hold it back from serving different clients who are attempting to get to the web application.

Why are layer 7 DDoS Attacks Dangerous?

Isolating ordinary traffic from malignant solicitations takes a lot of costs on a framework, particularly when it is being assaulted by a botnet playing out an HTTP flood. The botnet will utilize fairly genuine organization demands that will forestall any doubt.

Application layer assaults are intended to zero in on a versatile system that might incorporate the capacity to keep typical traffic from getting to a server dependent on preset guidelines, which are liable to changes. The utilization of instruments, for example, WAF can assist with diminishing any surprising traffic from getting to the beginning server. This would diminish the impact of these assaults generally.

The justification for why layer 7 DDoS assaults are so risky is because a couple of organizations are fit for withstanding such malevolent impacts. Not many sites can reroute and contain the volume of solicitation created by an l7 assault.

As referenced before, it is basic yet hard to recognize Layer 7 DDoS assaults given their trickiness and appearing to demand authenticity. To address these assaults, the DDoS alleviation arrangement must:

In any case, most DDoS relief arrangements will in general zero in uniquely on volumetric assaults and don't offer such far-reaching protection from Layer 7 assaults. Try to pick a DDoS assurance administration that offers an astute and thorough oversaw WAF, for example, Wallarm so you can guarantee your web applications are consistently accessible. Test your environment with the IP stresser tool.