Privacy settings
We use cookies and similar technologies that are necessary to run the website. Additional cookies are only used with your consent. You can consent to our use of cookies by clicking on Agree. For more information on which data is collected and how it is shared with our partners please read our privacy and cookie policy: Cookie policy, Privacy policy
We use cookies to access, analyse and store information such as the characteristics of your device as well as certain personal data (IP addresses, navigation usage, geolocation data or unique identifiers). The processing of your data serves various purposes: Analytics cookies allow us to analyse our performance to offer you a better online experience and evaluate the efficiency of our campaigns. Personalisation cookies give you access to a customised experience of our website with usage-based offers and support. Finally, Advertising cookies are placed by third-party companies processing your data to create audiences lists to deliver targeted ads on social media and the internet. You may freely give, refuse or withdraw your consent at any time using the link provided at the bottom of each page.
Thank you! Your submission has been received!
Oops! Something went wrong while submitting the form.
Reject All
Cookie SettingsCookie Settings
Accept AllSave Selection
Wallarm
>
Wallarm Learning Center
>
IP spoofing. Definition, Types and Protection
Attacks 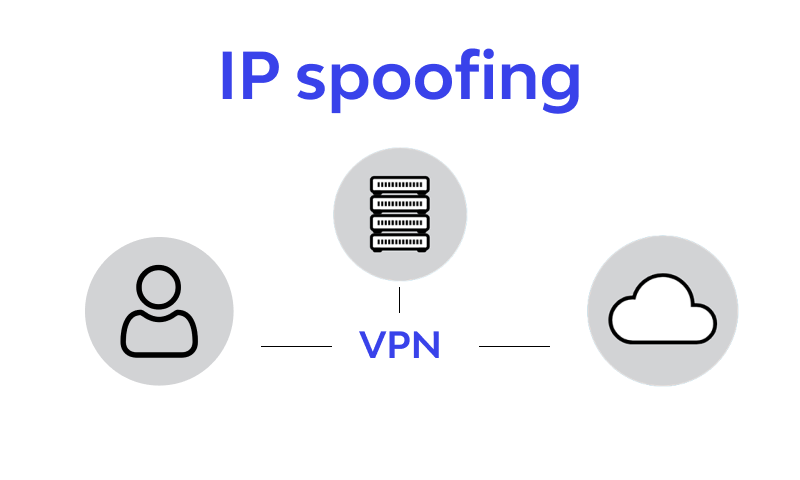 Disguises are as old as nature itself. It is the primary mechanism of survival in some animals. Humans too have been able to perfect disguise techniques beyond expectation. For instance, when copies of a supposedly unique fingerprint pattern are made, replicated and used in movies, it usually looks very cool.  It does not just stop there; humans have been able to develop masks that give them the apparent identity of another person. This is what spoofing is all about. It’s about pretense, disguise and impersonation.

Technically, spoofing is a body of processes that cyber attackers (or let’s just say attackers) employ to cloak unknown and unsafe sources as trusted sources. That is, they pretend to be a source that you trust so much,  they leverage on the trust you have built towards this source, they use social engineering methods (at least to a certain degree) to trick you into letting out your personal information.

It is often a game a psychology and technical understanding. For it work, three parties are needed, the trusted source, the victim, the attacker (with the spoof). Once the trusted source can be successfully impersonated, it just takes a little game of blackmail or gas lighting to get the attacker’s desired result on the unsuspecting victim.

There are other various types of spoofing; examples include ARP spoofing, facial spoofing (or you could say biometrics spoofing). When it comes to internet and cyber security however, one of the most common and dangerous type of spoofing is the IP spoofing. Let’s consider a brief overview of IP spoofing attacks.

IP’s on the other hand are some sort of identity tags unique to your computer system. The “address tag” that accompanies Internet protocol is very significant. Technically speaking, Internet protocol addresses are certain identifiers – attached to specific networks –that allow computers to communicate effectively with the internet. Essentially, IP addresses are like your identity online (at least to the servers and the other computers). Now imagine someone somehow could replicate that identity perfectly; the implication is obvious, they get to impersonate you to get access to your personal information, data wealth, finances, name it. That is what IP spoofing entails.

Technically, IP spoofing is the process of using an altered source address to generate an internet packet with the goal of obscuring, impersonating another computer system. More often than not, the end goal would be to gain access to some of personal information. However, at times, attackers use the people’s internet identities to commit crimes (probably to deface and blackmail these individuals) or to carry out volumetric distributed denial or service attacks.

To put this in perspective, think of when the old system of receiving mails, you know, the one with hand written letters and deliver post men. If someone wanted to deny you of getting your letters and packages, they just need to find a means of altering the delivery access at the sending point. They could do this by altering the address to look very similar, so that they can avoid being noticed. You would definitely never get any package that way. That is a euphemistic representation of IP spoofing.

IP spoofing is dangerous provides a groundwork for all other types of cyber-attacks. Cyber attackers often need to disguise using legitimate IP addresses to lay the surface for the next complex phases of the attack. For instance, IP spoofing is a major step is ensuring the success of application layer attacks and Distributed denial of service attacks. Let’s see how it contributes to the above mentioned.

Application layer attacks are structured to target and leverage on the vulnerabilities of mobile and web applications. These types of attacks are very common in the cyber space. The aim of the attacker is often to render an application non-functional, deface it, or steal the sensitive information of the users of the application in question.

Distributed denial of service attacks are geared at rendering a web application nonfunctional by overwhelming it with traffic or requests that could consume its processing bandwidth. It’s like obstructing the normal route of a group of people, and directing them to a smaller route made to accommodate a smaller amount of people. What this creates is a total uselessness of the victim application. There are quite a number of different DDoS attacks, each with its method. However, the type that epitomizes the essence of DDoS is the volumetric DDOS attacks. This type of DDoS attacks effectively uses volume to consume the processing capacity of victim application.

This is where IP spoofing comes in. IP spoofing is often used to lay the groundwork for volumetric DDoS attacks. For instance, when a trusted source tells you to click on a link, the first reaction would be to click on that link. Cyber –attackers spoof many trusted sources and use social engineering to direct people to a target website. Of course, this requires precision and technical know-how; however, it is one of the most effective ways of carrying out a volumetric DDoS attacks in a way that appears legitimate.

How To Protect Your Network Against IP Spoofing Attack

Due to the extent of the damage an IP spoof could lead to, organizations need to be aware of ways to prevent such attacks. Here are a few tested and effective ways to go about it:

IP spoofs are dangerous for networks, databases, computers and users. It is a must that any one – in one way or the other – is informed about it. It is also important that each person takes responsibility and protects themselves from these sorts of attacks; our data is the future, let’s keep it safe.

👉In this article, you will learn what ransomware is, examples of such programs, how to detect, protect and remove them.

SSIs are Web application orders that are utilized to give dynamic substance into a HTML page. 📙 SSIs are like CGIs

However, if exploited, ARP protocol can cause serious threats. ARP spoofing is the most concerning one. Learn more about this attack in this post. 📄

In this article we will tell you what a DDoS attack (denial of service attack) means, describe different types of these volumetric attacks, its methods and explain how to prevent them.

Attacks, Vulnerabilities
What is a Google Hack?

In this article, you will learn what Google Hacking is. How google hackers extract confidential information, database using the Google search engine.