How OAuth Differs from SAML and OpenID - Learn it all 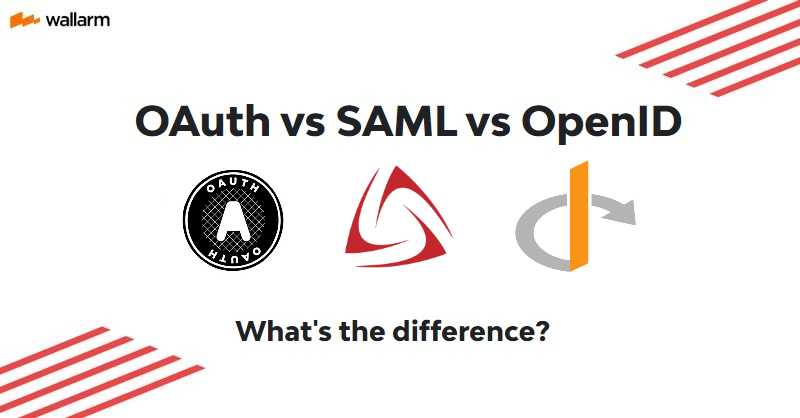 It’s useless to talk about the need for enforcing right and tight kinds of security practices to keep digital assets safe. Almost every day, we see various threats giving hard times to business owners and IT experts. Implementing an effective AppSec approach is the only way to have control over surge cybercrimes and thefts.

As a part of the Single Sign On security approach, expert prefer SAML, OAuth, or OpenID. But:

Are they the same? How do they differ from each other? Which one works best among SAML vs OAuth vs openID?

These are the questions that we addressed in this post.

Open Authorization or OAuth 2.0, as we all call it, is an authorization framework that provides detailed guidelines to grant or control protected access to various kinds of digital assets. It’s effortlessly applicable on APIs, hardware, apps, users, systems, and even servers.

The access is controlled by an access token and application/API/devices are permitted to deny access if allotted or pre-defined token information isn’t provided or wrongly entered.

Before OAuth (2010), HTTP’s basic method was used for access control, but things changed for good. The current version, OAuth 2.0, came into effect in 2012 when REC 6749 update reformed primitive OAuth 1.0 extensively.

Have a look at the key characteristics of OAuth:

As far as OAuth processing is concerned, one must understand that it’s majorly based on three factors or components; consumer, end-user & service partner/provider.

Now, you must understand that the tokens used in OAuth are of two kinds: Ones with short lifespan and the ones with longer lifetime.

Both the token types are encrypted to keep the data protected.

After having clarity on OAuth, it’s time to move to SAML which stands for Security Assertion Markup Language. It was designed by the OASIS Security Services Technical Committee in 2002. If the history of protocols is taken into consideration, it’s easy to conclude that SAML is indeed the oldest option that we’ve had.

Functionality-wise, SAML is a globally recognized open standard that must be followed for exchanging the credentials for authentication and authorization. Here, the parties involved are service-givers and identity providers in general.

After its conception in 2002, it has gone through multiple updates and reformations. Presently, SAML 2.0 is preferred and adopted the most.

The key roles that exist in SAML working are:

All these three components work together when SAML is implemented.

It is a distinct user identification process used in the SSO technique to control multi-site access. The protocol’s key focus is on making things easy to process and less complicated so that end-user identity-checking is possible for everyone.

OpenID is an OAuth 2.0-based authentication open standard. It eliminates the need of having multiple user accounts for different websites.

Generating and managing different login accounts leads to errors and confusion. It’s not easy to generate a strong password for diverse websites and manage them as well.

With OpenID, it’s possible to log in to multiple websites with a single ID. It is intended to continue with the identity-check based on what’s gathered by the Authorization Server. Hence, it’s easy to conclude that its implementation isn’t possible without OAuth. With its help, it’s easy to learn about the end-user information by exposing it to the REST API.

OpenID permits the user to proffer evidence if s/he owns a particular URL that can be used for credential authentication. Using the URL, it’s easy to prove user’s authority is as it acts like an credibility-verifier.

As far as authentication is concerned, it can be done in multiple ways.

For first-time OpenID users, sign-in is possible via the OpenID provider only. After that, the end-user is redirected to a trusted website using the assertion. The assertion is related to the authentication approval.

For instance, message transmission in SAML is done using XML while OAuth uses JSON for the same job. OAuth is mobile-based and simple to use. Its large-scale usage isn’t promoted. SAML is fit for enterprise security as it’s extensive and widespread. For the same reasons, it’s complex.

As OAuth is capable of working with API calls perfectly, it’s preferred for mobiles, gaming consoles, IoT, and the modern web as all these devices are API-based. SAML has limited implementation because of its ability to leave a session cookie in the browser. It’s only preferred to authenticate people/users for short-lived work days.

Let’s break this discussion into 2 parts to simplify the subject for you:

SAML vs OAuth is an extensive topic. The notable differences are:

Which of the three protocols to use and when?

It’s important to find out about the use cases of these three protocols. SAML is suitable for identity management as its strong encryption can keep crucial information safe. Virtual desktop infrastructure is also a notable SAML application.

OAuth is suggested when you need to enforce security practices for mobile applications, at least possible hassle.

Try OpenID when an application requires temporary access. OpenID is useful when all the authentication work has to be done by you.

The world of IT security is extensive and Single Sign On is one part of this far-reaching concept. SAML, OAuth, and OpenID are three main techniques that are used widely in SSO. But, they are highly diverse in their functioning. This blog is useful to understand the key differences between SAML vs OAuth vs OAuth. Having better clarity will lead to upright implementation.