Privacy settings
We use cookies and similar technologies that are necessary to run the website. Additional cookies are only used with your consent. You can consent to our use of cookies by clicking on Agree. For more information on which data is collected and how it is shared with our partners please read our privacy and cookie policy: Cookie policy, Privacy policy
We use cookies to access, analyse and store information such as the characteristics of your device as well as certain personal data (IP addresses, navigation usage, geolocation data or unique identifiers). The processing of your data serves various purposes: Analytics cookies allow us to analyse our performance to offer you a better online experience and evaluate the efficiency of our campaigns. Personalisation cookies give you access to a customised experience of our website with usage-based offers and support. Finally, Advertising cookies are placed by third-party companies processing your data to create audiences lists to deliver targeted ads on social media and the internet. You may freely give, refuse or withdraw your consent at any time using the link provided at the bottom of each page.
Thank you! Your submission has been received!
Oops! Something went wrong while submitting the form.
Reject All
Cookie SettingsCookie Settings
Accept AllSave Selection
Wallarm
>
Wallarm Learning Center
>
Hacktivism - What is it?
Attacks

Hacktivism - What is it? 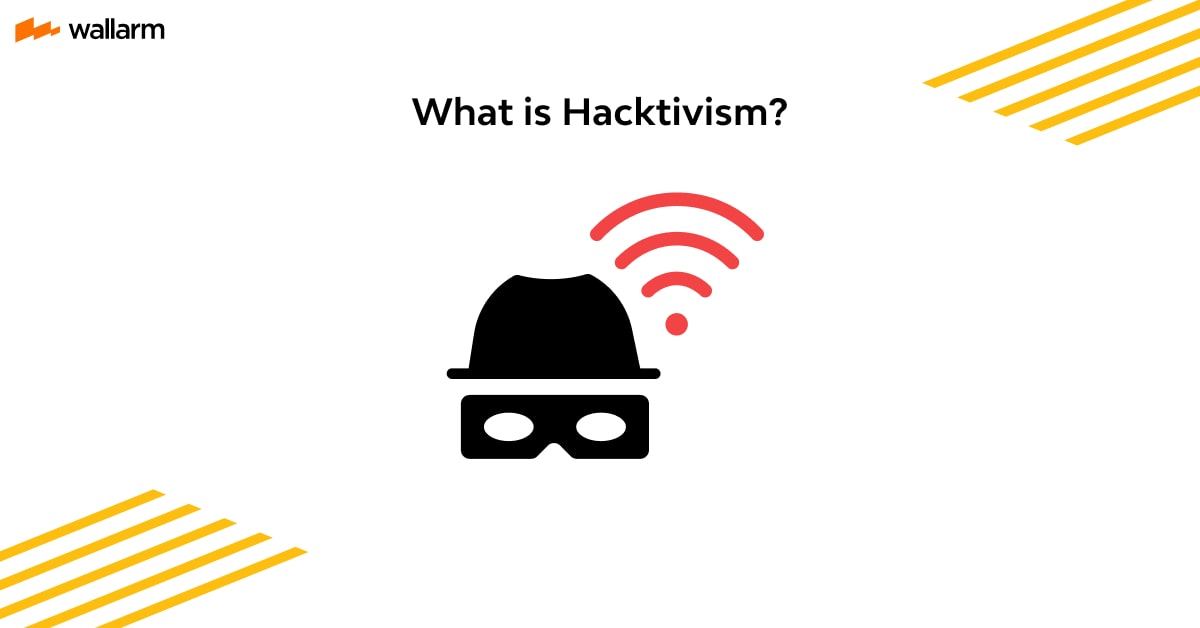 The times of activists rampaging and sitting in unapproved areas to cause to notice their causes are a distant memory. As a result of the web, advocacy has changed, and hacktivism is a recent trend. Continue reading as we breakdown the subject to you starting from hacktivism definition.

Hacktivism is a sort of social or political activism that includes breaking into a solid PC framework and unleashing devastation. The hacktivist bunch Cult of the Dead Cow is said to have begat the term hacktivism, which is a blend of "hacking" and "activism."

Hacktivists by and large accept they are acting in the public interest. Online activists, similar to activists in the actual world, try to raise public mindfulness about a reason that means a lot to them with expectations of ordering change.

This as often as possible involves uncovering and adjusting apparent bad behaviors. The apparent shameful acts could be political, social, or strict in nature.

Strict hacktivism acts for the sake of a strict philosophy and may look to ruin or advance it.

The main goals of hacktivism

Coming up next are a portion of the objectives of hacktivism:

Individuals who utilize common rebellion to bring issues to light about an issue might organize a protest. Since handfuls or many individuals are genuinely sitting inside a region during a dissent, the business that should be finished there should stop. Since business needs to stop, the activists certainly stand out.

Doxing is the act of unveiling private or humiliating archives. Individuals who have a great deal to lose on the off chance that the public learns about their confidential exercises are often the objectives.

Hacktivists spill data to acquire consideration as well as to focus on an association or person who goes against their convictions. At the point when precise data is delivered, news associations rush to distribute it.

Regardless of whether they utilize their genuine names, bloggers can frequently convince individuals that they are coming clean and offering substantial social expressions. The objective can't seek after the blogger since the individual in question is unknown.

A hacktivist who utilizes the geo-area component to permit watchers of a video to know where it was shot is known as geo-bombarding. This is as often as possible used to show where political prisoners or basic freedoms activists are being held.

At the point when a site's substance is edited, programmers might duplicate it and republish it under an alternate Uniform Resource Locator (URL). The substance is as yet accessible to the overall population on the grounds that the subsequent URL isn't hindered by the editing element.

DoS assaults significantly affect the substance of the objective site; be that as it may, when programmers modify the code of a site, guests will see either a message or a mistake. They can rethink an association's picture and message along these lines, endeavoring to change how general society sees the organization through "definition hacking." The programmer might utilize keylogger programming or phony sites to take login data until they can mimic an executive and change the code.

Generally, hackers and hacktivists utilize similar devices and strategies to accomplish their targets. Programmers, in contrast to hacktivists, are not characterized exclusively by their social causes. Whether or not hacktivism is positive or negative is a petulant point. Hacktivist acts are less questionable regarding their lawfulness.

The Computer Fraud and Abuse Act makes DoS and DDoS assaults felonies in the United States. Numerous different nations, including the European Union, the United Kingdom, and Australia, have made such goes after unlawful. Site ruination is a type of digital defacing where an aggressor accesses a site and changes its substance. Burglary of corporate information is likewise denied.

Hacktivists contend that their activities hurt in a climate where there is now a lot of space for non-problematic free discourse. Others contend that such activities are equivalent to tranquil dissent and are subsequently safeguarded as a type of free discourse. Hacktivists habitually believe their activities to be a type of common noncompliance, in which they stubbornly violate the law to additional their objective.

Many individuals consider Anonymous when they consider hacktivism, they are one of the most popular hacktivism groups. This global hacktivist bunch arose in 2003 from the web-based message board 4chan and keeps on making news. Its will likely keep the web straightforward, and it favors really trying hacktivism assaults to achieve this.

Julian Assange established WikiLeaks, which is basically a whistle-blowing association. As the name suggests, spills are its favored hacktivism assault type, and it has been a facilitating space for spilled reports since its commencement in 2006.

To put it another way, it's a data leaker. It has likewise been blamed for sending off circulated disavowal of-administration (DDoS) assaults. This happened when the US government empowered organizations like Amazon, PayPal, Visa, and Mastercard to suspend benefits so WikiLeaks allies could never again give to the association.

Previous individuals from Anonymous established LulzSec, otherwise called Lulz Security, in 2011. To cause to notice defects in security frameworks and security insurances, the Anonymous branch-off has regularly designated high-profile associations like the FBI, the CIA, and Sony Corp.

Cult of the Dead Cow

Faction of the Dead Cow, otherwise called cDc Communications, is credited with authoring the term hacktivism in 1996. Long after the gathering was established in 1984 with an emphasis on hacking for the sake of advancing common liberties and opportunity of data, especially in China, that assertion was made in an email.

Ninja Strike Force and Hacktivismo, two other hacktivist bunches that some saw as moral models for hacktivism, fragmented off from it.

Hacktivismo was so focused on enemy of oversight that it prohibited DoS assaults, which it saw as a type of hostile to restriction. In 1999, the gathering delivered the "Hacktivismo Declaration," which filled in as a governing set of rules for other web-based activists.

Syrian President Bashar al-allies Assad's framed the Syrian Electronic Army in 2011. The gathering completes assaults in the conviction that they are safeguarding the president and Syria. DDoS assaults, including against US offices, are its favored hacktivism assault type.

Army of Doom was established in 1984 and has since developed to become one of the most impressive hacking bunches ever. The Hacker Manifesto, which is frequently credited with motivating another age of programmers, is the gathering's most renowned distribution.

Here are some hacktivism examples:

WikiLeaks, which, as Byline, looks to uncover stowed away bits of insight, designated PayPal, Visa, Amazon, and Mastercard in 2012, sending off conveyed disavowal of-administration (DDoS) assaults that thumped their sites disconnected. The assaults were organized in light of US government demands that these specialist organizations forbid individuals from utilizing them to send cash to WikiLeaks.