Book DemoFree TrialDocumentation
Wallarm
>
Wallarm Learning Center
>
gRPC vs WebSocket - When Is It Better To Use?
API Security

gRPC vs WebSocket - When Is It Better To Use? 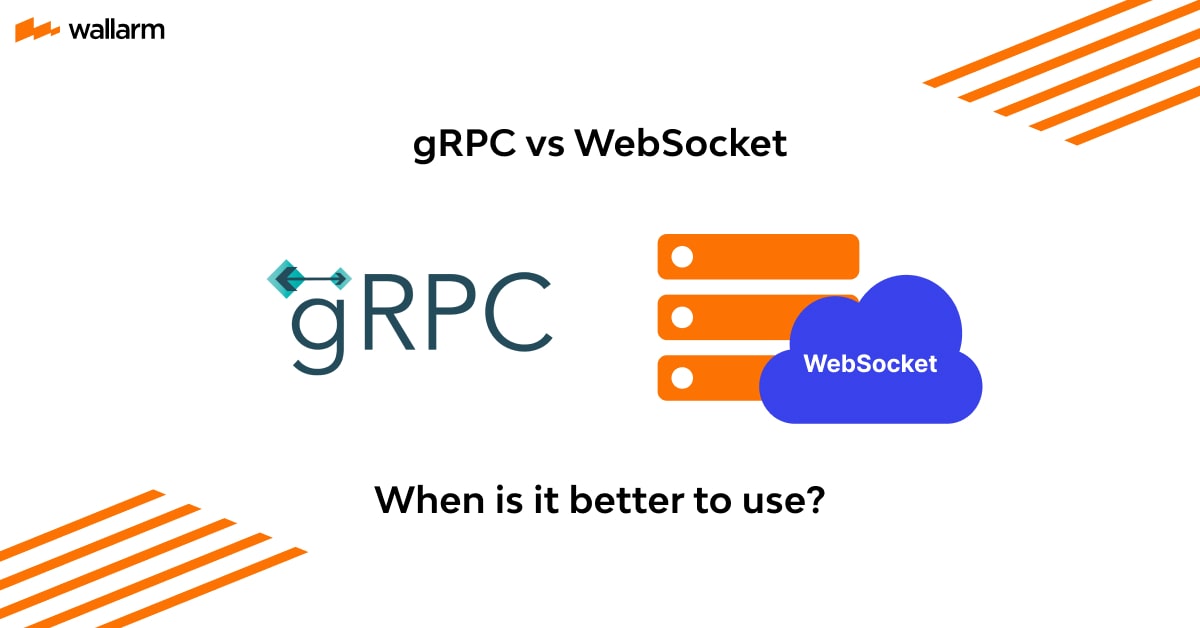 APIs have reformed the world of SaaS development and empowered client-server communication at multiple levels. Before one seeks its implementation, understanding the key models is imperative.

A high-performing and open-source version of RPC (Remote Procedure Call) framework, gRPC, or Google RPC is capable of working in any ecosystem with the same ease and perfection. From the name itself, it’s clear that it was developed by Google.

RPC is required to make an action execution on a remote server. gRPC fills the gap that existed in RPC. Whether the running environment is a server or a data center, gRPC makes API implementation possible.

What makes gRPC a step ahead of RPC is Its adherence to protobufs concept. By definition, Protobufs are used in data serialization. They are platform & language independent systems.

The authentication of gRPC is also way advanced as it’s based on Google’s token-based system and brings SSL/TLS into action.

Being an open-source framework, gRPC makes sure that the system is easy to audit, fork, and iterate. The main working model of gRPC is the request-response model and it’s based on HTTP/2 protocols. It supports bi-directional streams and banks upon protocol buffers to complete data communication and transfer. What’s worth noting here is that it can be used only for internal services.

After a basic understanding of gRPC, let’s learn about its strengths and weaknesses. Speaking of its strengths, which are high in number, we need to say that:

While its strengths are impressive, it’s not entirely flawless. It certainly has some weaknesses such as:

gRPC is useful for microservices development, polyglot services, client library generation, and scenarios that demand real-time integration of browsers and mobiles with back-end solutions. Try it for crypto-currency applications and experience seamless functioning.

It is a TCP-based computer communication protocol supporting full-duplex and bidirectional data transfer. The protocol was accepted as a standard API implementation tool in 2011.

WebSocket establishes an open and continual connection between the client and server using which they can exchange data anytime. It’s a stateful protocol that means the connection won’t break until either party decides to discontinue data exchange.

The data is transferred from client to server and vice versa in the form of packets. This makes it an ideal choice to make when chat, gaming, and bitcoin trading application development is the goal.

WebSocket gains an upper hand from other API resources because of its key strengths, which are unmatched.

But, it also features notable limitations and weaknesses such as it only works with HTML 5 browser, has no edge caching support, is not suitable for dynamic interaction, and is not very scaling friendly.

As far as its key use cases are concerned, you must understand that WebSockets are useful when you need the application to be used by multiple users, which demands instant message delivery, and an all-time open connection. Applications like chat applications and data dashboards are perfect use cases for WebSockets.

It’s also preferred for game applications as gaming apps need low latency and high ping speed which is only achievable with the use of WebSockets.

It’s time to talk about the main topic - gRPC vs WebSocket.

We have analyzed these two on various fronts. Before pondering over the dissimilarities, you must understand that these both solutions make full-duplex and bidirectional communication possible.

They both are HTTP based. But, different versions of HTTP are used. WebSocket uses HTTP/1.1 while gRPC is based on HTTP/2. Because of different HTTP versions, they two have different data processing.

gRPC processes messages in the binary format while WebSocket uses multiple data formats. Most commonly, JSON and MQTT are used for data format. Now, you must understand that the use of data format decides the message readability.

gRPC-based messages are easy for machines to understand but humans have to make added efforts to make sense of the code as the binary format is not very human readable. One has to make efforts to decide what’s stored in the binary codes.

Gladly, WebSocket makes message understanding easy as all the data formats it supports are easy to process for humans. Because of this, WebSocket is considered a more textual protocol as compared to gRPC.

gRPC is preferred over WebSockets if the application demands various requests processing at one time. gRPC supports multiplexing that arranges different requests seamlessly. But, multiplexing isn’t offered by WebSocket. Hence, one connection is useful only for one request.

Security is one concern that should be at the pivot in both cases. As gRPC is token-based and supports SSL/TLS encryption, API security is certain with this option. WebSocket doesn’t have any in-built security features. You need to take the help of access control policies like JWT validation.

Need a crisp overview of gRPC v/s WebSocket? Have a close look at this comparison table.

In summary - What to choose?

Choosing the right kind of API model decides the viability of the application in the future. gRPC and WebSockets are two viable solutions for API usage. gRPC is useful when real-time communication is required. But, it’s not suitable when you need a browser API. WebSockets ensure continual data transfer but it’s not easy to scale.

Basically, you need to be doubly sure about what are your application development goals and move accordingly. Try to find out that:

Pay attention to all these aspects and then decide which one, out of these two you should pick for your upcoming project.