Book DemoFree TrialDocumentation
Wallarm
>
Wallarm Learning Center
>
API vs. Webhook vs. Websocket - When is it better to use?
API Security

API vs. Webhook vs. Websocket - When is it better to use? 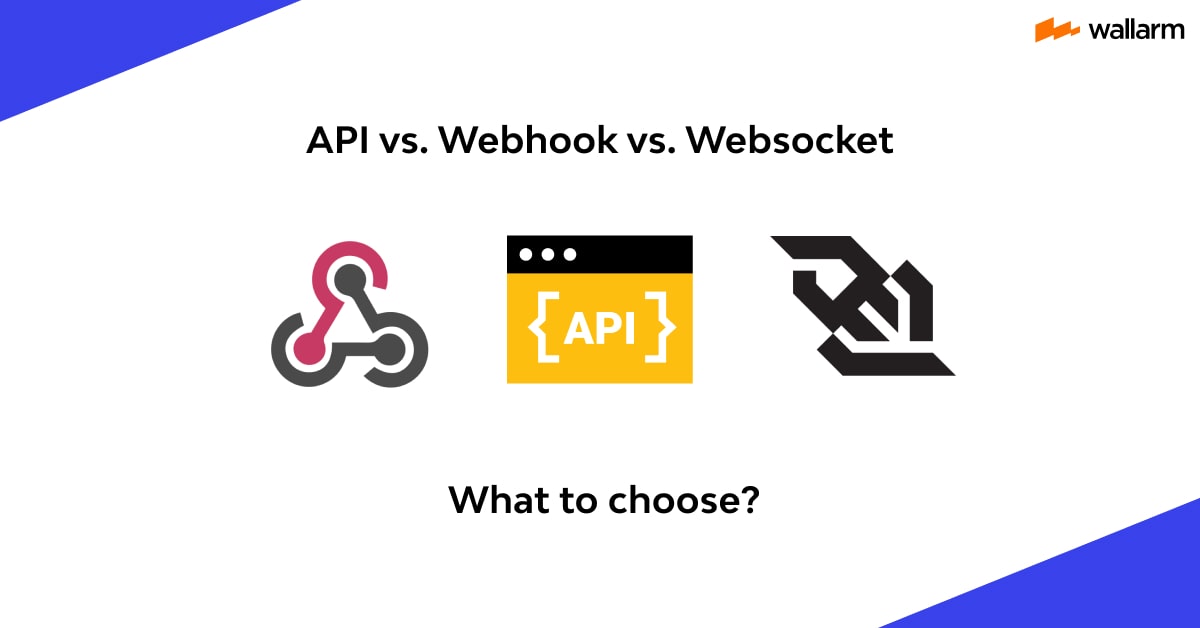 It’s not possible to talk about development/designing of apps without thinking of components like Webhooks, APIs & WebSockets. These three decide how the anticipated application is going to perform data exchange between apps and their respective servers. Without them, it’s not possible for a digital product to pass on data from one point to another.

While these three work towards the same aim, they are not used in the same situations. To ensure their result-driven usage, it’s crucial to learn about the situations suitable for every web communication resource.

API acts like a mediator between the HTTP-based server and the customers.

When powered by API, web app data is processed on server side first and then by client-side application. Based on the usage, APIs are of three kinds.

APIs guide machines/devices/applications on how they can converse with each other.

Just as we use speech to express what we’re thinking or what to say, applications and machines use APIs to process their actions.

Sitting between a software module (or your app) and the server, the API guides both of them on how data should be exchanged throughout the digital infrastructure.

As every incoming and outgoing data has to pass through API before reaching to client or server, it’s important to work on API security. With poor security, the entire application tends to have corrupted processing. Any malicious content in the API can cause severe damage to the entire application.

When analyzed deeply, one will be able to find out that WebHooks are nothing but reverse APIs as they do the exact opposite of APIs.

Some even refer to them as server-to-server push notifications as they can inform servers about the actions taken up by one server. This feature makes them ideal for handing integrations between various solutoins/apps.

With the help of WebHooks, you may create an event in 1 application and take/expect action in another one.

WebHook applications are highly versatile. Depending upon the requirements of the app, WebHooks can notify an application/web app of receiving a message, processed payment, or any other update.

By stateful, we meant that the communication continues until one of the participating party terminates it. Another key trait of WebSocket is that it promotes a 3-way handshake.

When To Use API Interfaces

APis are perfect for use when the application requires an easy interface and point of contract for end-users. Situations that involve CRUD operation from mobile and web, data transfer happening using XML or JSON, and frequent data changes are ideal for using API for application communication.

As API requests are created by end-users, they are useful for applications that demand instant response against the raised response.

WebSockets are perfect for applications that demand real-time communications as they promote bidirectional communication. It leads to an open connection that makes information exchange possible anytime and from anywhere.

WebSockets are useful when the application is a collaborative tool or promotes collaboration-based integration.

WebHooks proved their efficiency best when they are used for making back-end calls.

The issue that might get generated because of always open communication, which is the case with WebSocket, will be fixed completely with WebHooks. It proffers a disconnected mechanism that is the entire opposite of API.

Using WebHooks for applications that ask for one-way event-infused communication on the server extracts the perfect result. Use it when an application has to fetch data from a 3rd party application easily.

Usage of Webhooks is preferred even when the application is deployed on the cloud.

Such applications don’t require open communication, which is not possible by WebSockets.

The core of application design is how server-client communication happens.

Efficacy on this front decides the utility of an application. APIs, WebHook, and WebSocket are the three most preferred ways to pass on information between these two aspects of applications. APIs are the future as IoT-based devices use them the most. WebSockets are here to help when developing a chat-centric application is the goal.

In short, try WebSockets when your communication is event-driven. First, sort your app development requirements and then decide on a communication means. They all may do the same thing but have different use cases.