Privacy settings
We use cookies and similar technologies that are necessary to run the website. Additional cookies are only used with your consent. You can consent to our use of cookies by clicking on Agree. For more information on which data is collected and how it is shared with our partners please read our privacy and cookie policy: Cookie policy, Privacy policy
We use cookies to access, analyse and store information such as the characteristics of your device as well as certain personal data (IP addresses, navigation usage, geolocation data or unique identifiers). The processing of your data serves various purposes: Analytics cookies allow us to analyse our performance to offer you a better online experience and evaluate the efficiency of our campaigns. Personalisation cookies give you access to a customised experience of our website with usage-based offers and support. Finally, Advertising cookies are placed by third-party companies processing your data to create audiences lists to deliver targeted ads on social media and the internet. You may freely give, refuse or withdraw your consent at any time using the link provided at the bottom of each page.
Thank you! Your submission has been received!
Oops! Something went wrong while submitting the form.
Reject All
Cookie SettingsCookie Settings
Accept AllSave Selection
Wallarm
>
Wallarm Learning Center
>
API management for IoT
API Security 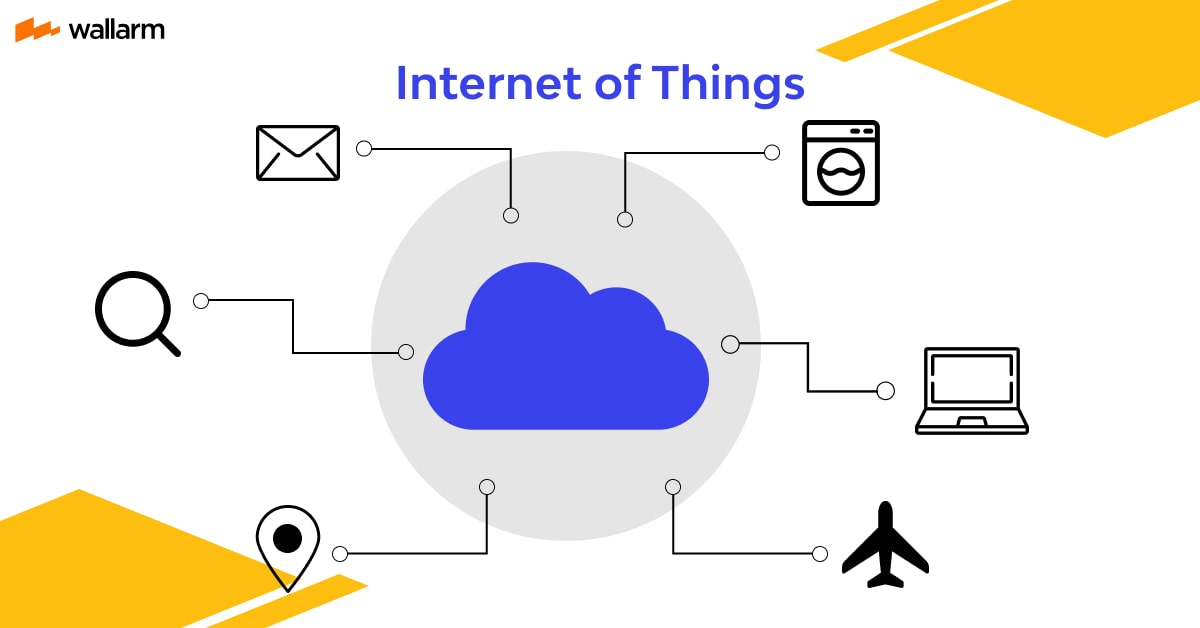 API is the core of IoT as it’s what makes IoT devices use the internet for communicating and conducting allotted operations efficiently. Communication API in IoT plays an important role as it empowers IoT devices for seamless information exchange.

However, the API abundance can be a challenge for the organization as it takes a lot to enforce effective security policies for APIs. So, let’s move about the Internet of Things API and key API security practices to adopt in this post.

What is Internet of Things?

Abbreviated as IoT, it is an inventive approach framed to let devices/applications connect or communicate using the internet for sharing precious data back and forth. It’s a huge set-up of linked applications, resources, devices, and end-users that share information regarding their operations and surroundings.

The system functions on concepts of data analyses and automation while dealing effectively with sensors, cloud messaging, sensors, and AI. IoT devices are best known for their unmatched performance, upscale utility, and better control.

What is an IoT API?

In general, API is the term referring to standard framework collection, protocols, and resources dictating the generic web and mobile application. It defines the communication rules that every application component must follow while exchanging information with each other.

APIs that are used in the creation of IoT solutions are known as IoT APIs. They are the web services application programming interfaces. They work in a similar fashion and make seamless data flow, with HTTPbeing the medium. Using the IoT API lets developers design advanced applications that are easy to integrate with other web services.

IoT APIs make the end-user experience exceptional in multiple manners. For instance, they can log in to the websites easily and bring a good number of applications on board.

APIs in IoT are highly diverse to support IoT development by all means. The key API types

are as mentioned next.

SOAP APIs are crucial for IoT devices development as they make building a communication bridge between the servers and the clients. The API supports only XML-based data transfer.

IoT REST APIs useful for HTTP data transmission and for empowering IoT devices to stay associated with the rest of the world. These APIs are driven by architectural principles and boast features like interfaces simplicity, instant resources identification during the request, and manipulation of particular interfaces.

A bit older than SOAP APIs, JSON and XML IoT APIs are based on a simple approach and consume limited bandwidth.

The important role of APIs in the IoT

What makes API crucial for IoT and any other device/software is the fact that they support effective utilization of pre-existing functions to ensure smooth software processing while keeping developers free from the need of reprogramming again and again.

The world of IoT is too complex demanding continual contact between multiple agents involved. API usage makes the task achievable as integrating assorted IoT components with each other is 100% possible.

Speaking of cybersecurity, APIs are essential as developers can use them to gain control over access requests. This limited and controlled access keeps the DDoS attack possibilities less than expected.

Considering all this, it’s easy to conclude that the world of IoT will be on the brink of fall, with less productivity, and higher security risks if APIs are not involved.

IoT is a trending technology and is going to stay here for a little longer than one can expect. However, its effective utilization depends upon the degrees of API management as if that’s not happening, enterprises and end-users are going to have a tough time with IoT devices. Here is how:

API vendors for the Internet of Things

Seeing the surge in API usage in IoT, certain vendors are bearing the responsibility of offering tailor-made communication API that meets all the IoT API standards.

With Withings APIs developers involved in the development of measurement devices can be benefitted hugely as the API can share the collected data over the internet. Most commonly, the collected information by this API vendor is ECG and EKG, body weight, and sleep cycles.

This API is capable of being integrated into IoT devices easily and supports operations like voice control, natural language processing, hotword detection, and many other facilities. It guides developers through-and-through during the management and conversation stint. Using the API, developers can easily make IoT devices voice-controlled by phones, displays, watches, TV, laptops, and Google Home Devices.

Direct search about details like weather, traffic, news, light, task management, and many more other details can be made.

The APIs coming from this vendor serves as a doable platform for connecting Siri and iPhone with the Apple-based home devices and appliances. Accessible with the help of Apple iOS8 SDK, the APIs can make devices like lights, garages, doors, TV, and many more to be controlled directly via voice.

The increased number of cyber-attacks and risks is a serious concern for anyone offering a service or product. IoT devices are also not out of the reach of threat actors. In fact, IoT devices of all applications bear the highest cyber risks as they operate using internet connectivity. If adequate and viable IoT API security practices are not practiced, multiple security risks will engulf the IoT devices.

Out of 80% of organizations that have used IoT devices in any form, 20% have already encountered cyber attacks, says Gartner’s recent report.

To stay safe from this danger, it’s crucial to back-up API with efficacious security practices.

Below mentioned methods can enhance security for the API.

How to Enable Data Security through Efficient API Management?

Managing APIs well is, and will be, at the front seat when improved customer experience, increased efficiency, and enhanced IT operation are concerned. As API is about data and knowledge that it transports, its management is incomplete without robust API security practices. To implement them well, Wallarm API security platform could be of great help for you.

Cloud-native API management is our forte. The platform plays its role in managing APIs by taking the responsibility of end-to-end data security in API design, development, use, and testing. You can manage the maturation of all sorts of APIs like RESTful API, SOAP, GraphQL, and gRPC can be managed with Wallarm.